Skip to content
Decades > 1960s
This entry is part 1 of 12 in the series The Don Hallock Collection
Reading Time: 4 minutes

A small collection of memorabilia which survived the 1961 fire. 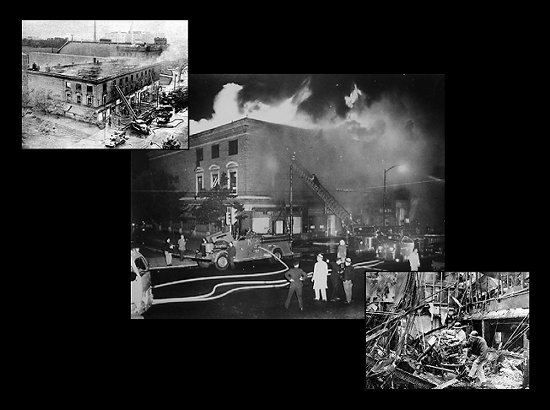 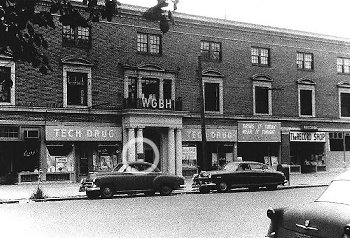 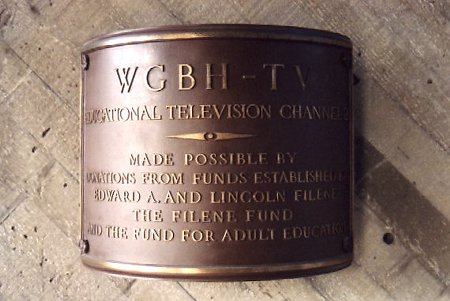 This brass plaque adorned the entrance to the 84 Massachusetts Avenue studios. We who worked there walked past it almost every day of the year, where it was affixed to the column just left of the front door (circled in the black and white photo above). It is now enshrined in the foyer of 125 Western Avenue. 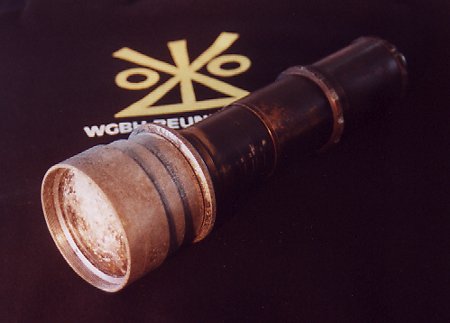 The 8″ and 12″ lenses were standard camera equipment in the studio. The long lenses were primarily used in field pick-ups, such as the Boston Symphony or Boston Arts Festival telecasts, where cameras were, of necessity, placed at some considerable distance from the subjects.

Badly charred, its glass elements crazed with cracks, the lens was salvaged from studio A by Phil Collyer.

An Ode to the Orth 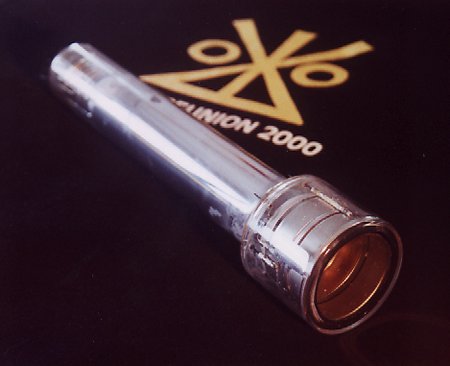 The 3-inch, type 5820, Image Orthicon camera tube — familiarly known as IOs,” “IMOs,” or “ORTHs” — they were manufactured by RCA for their TK-20 and TK-30 black and white studio and field television cameras.

The tube was direct successor to the type 1848 Image Iconoscope (right). Invented in 1923 by Vladimir Zworykin, the Iconoscope was the first vacuum tube capable of forming an electronically scanned moving image, thus making possible a non-mechanical television system.

The 5820 was smaller than this predecessor, and produced a much superior picture, mercifully utilizing a lower ambient light level (only about 125 foot candles rather than the blistering 500-plus previusly used for black and white, and later for primative RCA color, which used 3 5820s, one each for red, blue and green channels, with the available light then heavily filtered and divided between them).

This monochrome tube [the 5820] was in use from the early 1950s until the advent of the 4-1/2 inch Orthicon in about 1961 (the new RCA model TK-60, and the Marconi Wireless black and white cameras having been designed around this larger, and significantly improved, version of the IO).

The 5820s cost about $1,500 each, and had a life span of only 400 to 600 hours. When first installed, a brand new tube produced an image of somewhat compromised resolution, with gray tones which were a bit muddy. As the tube aged, its picture output would slowly improve, the focus becoming sharper and the gray scale modeling more distinct, brilliant and beautiful.

At around 300 to 400 hours use, the tube was reaching its quality peak, but would then begin to exhibit what was known as image “sticking” or “burn-in.” After about 500 hours (10 weeks or so) the camera could not be left on a stationary scene for more than a few seconds without retaining a negative image which would persist for several minutes, forming a ghostly superimposure over anything else the camera was pointed at.

Title cards (white lettering on black) produced the most stubborn “burn-ins.” Approaching the conclusion of the life of a tube, the camera operator (when off the air, between shots) would repeatedly have to resort to panning the camera back and forth across the brightest available light source to wipe out burned-in images.

At this stage the picture quality was superb, but the tube was, for all practical purposes, useless. This one was salvaged from studio A by Phil Collyer. I was not operating cameras in 1961, but those of us who were directing that year very likely did a show or two which passed through this very tube. 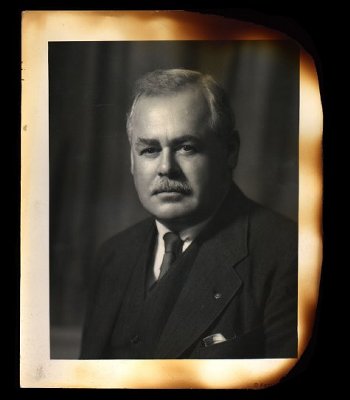 This portrait of Ralph Lowell was almost undoubtedly made by Fabian Bachrach of Boston. It was rescued from a desk drawer in the third floor office area of 84 Massachusetts Avenue, where it was most probably stored for use as a publicity image.