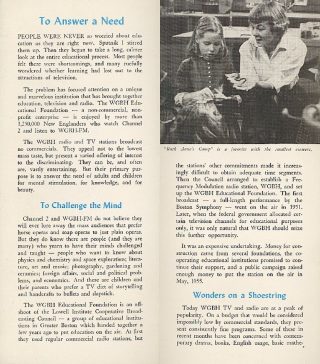 Once upon a time, [circa 1959] as I recall, the Educational Television station in an eastern city called Boston produced a daily late-afternoon children’s program.

That program was known as “Ruth Ann’s Camp.” And in the “camp,” each day, Miss Ruth Ann would bravely lead eight grammar school children through an hour of “fun and games” … activities designed to challenge and improve young minds.

Miss Ruth Ann was a blond, bouncy, take-charge kind of small female person, who was, in the off-camera world, known to get a little testy from time to time. The young visitors to the camp never saw this side of Miss Ruth Ann.

Now, on one particular afternoon, such usual camp activities as making oobleck and tooth brushing lessons had been put aside so that the children could spend time with a new visitor, namely a darling, adolescent chimpanzee.

For the purpose of the broadcast, the chimp had been put completely in Miss Ruth Ann’s care. Carrying him like a baby, astride her hip, Miss Ruth Ann introduced the animal to the kids, and vice versa. The chimp grimaced and hooted, curled it’s lip and coyly traded toys with the delighted children.

Approaching the end of the broadcast Miss Ruth Ann rose and stepped forward, with the kids in tow, to deliver some final words to the children at home about animals and what wonderful friends they can be.

At some point, early in the monologue, the studio crew became aware that something was going very wrong. The stage manager motioned to the cameraman, calling his attention to the situation. Responding, the cameraman quickly dollied forward a tiny bit to a tight waist shot, just eliminating the nether end of the chimpanzee and everything south of that.

Unfortunately for Miss Ruth Ann, the diaper the chimp was wearing had slipped aside just enough for a huge, rather liquid, simian dump to surge onto her shorts, ooze its way down her bare leg, over and into her clean white sneaker and outward to pool around her feet on the studio floor.

The stage manager, dutifully following instructions from a control room blissfully unaware of the dire dilemma their star was in, signaled her to stretch, being as how there was still two and one half minutes to go before closing credits. All the audience could see was the scene-stealing monkey adoringly hugging Miss Ruth Ann like his own mommy, and his prisoner-of-love desperately trying to ad lib her way out of an eternity of deep doodoo!

To her credit, the audience never did discover her plight. Somehow, Miss Ruth Ann managed to sound rational for the remainder of the program, accompanied by a helpless studio crew strangling in their desperate attempts not to guffaw out loud, and a newly aware, and incredulous, control room convulsed in laughter.

At long last, the stage-manager slit his own throat with his index finger, signifying to poor Ruth Ann that the show was off the air. There was a moment of silence … and then a single, descriptive expletive echoed through the studio. The children surrounding Miss Ruth Ann looked up at her, somewhat shocked and mystified. They all dispersed into the conference room where their unknowing parents waited. The well-meaning chimp was express-mailed into it’s trainer’s arms. Miss Ruth Ann disappeared post-haste to the lav to do we know not what. And, by order of “The King,” the crew set to with buckets and mops to clean up the awful mess.

The event took place on a Friday, thank God. On Monday, Ruth Ann’s camp would go on the air with a fresh group of children. And the incident was, I believe, never spoken of again.