Skip to content
Decades > 1950s
This entry is part 1 of 12 in the series The Michael Ambrosino Collection
Reading Time: 7 minutes 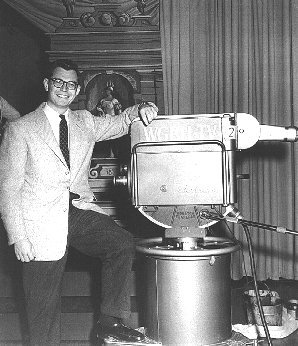 September 1956. The obligatory photo made of new employees in those days. It was run by the Westhampton Beach Chronicle, circulation 3000. My mother loved it.

My first visit to WGBH was in the fall of 1955, just after TV had gone on the air at 84 Mass Ave. in Cambridge. I was at work developing a TV master plan for the University of Connecticut at the time, and wanted a tour of one of the few (12) “educational” stations on the air.

Several drives up and down Mass Ave. from the river to Harvard Square showed nothing remotely resembling a TV station. Finally locating an oddly shaped small brick building, with a row of stores and a soda fountain on the street, I entered a small doorway between two round pillars.

A dark green flight of stairs led up to one of the smallest reception rooms ever seen, mostly taken up by the huge telephone switchboard. Behind it sat, at lunch time, one of the WGBH secretaries affording the regular operator a lunch break. On this day, it turned out to be a beautiful and familiar face, a former classmate from Syracuse University, Bernice Goldberg. Many of you will remember her in later life as “Bunny” Chesler, the gifted author and one of the spark plugs of the ZOOM staff.

While waiting for my tour, three identically clad men, all in charcoal gray suits, white button-down shirts and black knit ties left for lunch. “Gracious,” I thought. “They’ve all brought their Harvard uniforms with them!” I suspect that was my first view of Hartford Gunn, Larry Creshkoff, and Ted Sherburne. In such a way are first memories born.

In the Spring of ‘56, I gave a short talk at Harvard, describing the Ford Foundation school TV project I was then directing in Schenectady, New York. Hartford heard it and a few weeks later asked me to start in-school TV for Massachusetts. Arriving at WGBH the same week as Dave Davis, Bill Cavness, and Lillian Akel, my first job was to redesign the small office to make room for all the new bodies. I “accidentally” moved Lillian Akel’s desk next to mine.

My second task was to design a TV production facility to fit into the yet unexcavated basement of the University of New Hampshire. This was Hartford Gunn at his best, part visionary, part schemer, but all action. Give the President of UNH the plan, ask him to excavate the space so that when money is raised for such a facility, there will be someplace to put it! Working with Hartford was an experience to remember.

The 21’ Classroom went on the air in 1958 with series in French, Music, Literature, Social Studies, and Science. Gene Nichols, Jean Brady, and I produced and directed and I remember John Henning as my floor manager. (I called him Mr. Henning in those days) 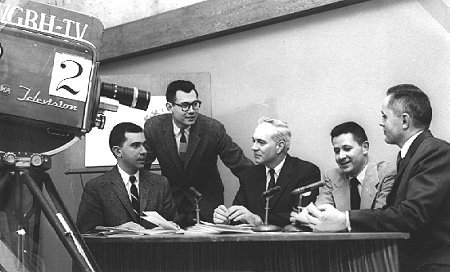 I left in 1960 to help Hartford create the Eastern Educational Network. It’s hard to think of a time when so few stations were on the air, but Hartford knew that if the educational communities did not activate their licenses they would get swallowed up by the commercial interests. He also knew that many stations would ensure our success as we grew and shared our resources.

I helped groups plan facilities and budget for them. I testified before Legislatures. WGBH offered free programs. All these steps were necessary to insure new stations in New England and the East. The EEN began with an off-air interconnection between WGBH and WUNH, became a useful adjunct to NET, and soon, under Don Quayle’s effective guidance, became the nations first interconnected public television network.

I returned to WGBH in 1964 as Assistant and then Associate Program Manager to Bob Larsen and then Michael Rice. In 1969-70 I also produced and appeared in an 18-program local documentary series immodestly titled Michael Ambrosino’s Show with Freddie Barzyk, Dave Atwood, and Peter Downey as my directors. More and more I realized that making programs was where I wished to be and told Michael to fill my job for I was taking my 40th year off! If I came back to WGBH it would be to do something else.

That 40th year was spent at the BBC as CPB’s “American Fellow Abroad” working on a nightly BBC1 news and current affairs program, 24 Hours. The whole family enjoyed our year in London. I strongly recommend taking time for everyone. Time is our most precious commodity and we seem to squander it or leave it to others to manage.

I did return to WGBH in 1971, and developed and was the Executive Producer for the first three seasons of NOVA.

Leaving again in 1976, I developed and executive produced two seasons of Odyssey, which was meant to be a continuing series like NOVA, but this time about human beings as seen in the past (archaeology) and present (anthropology). Nixon cut the PTV funding 40%. The stations bought 40% fewer series in the SPC choosing NOVA rather than Odyssey. So went my first experience as a freelance production company.

A side venture caught me up about this time as well. In the late 60’s, The Unitarian Church asked me to help a new black production company that had just started and assist with their efforts as I could. That began a 30 year professional and personal relationship with Henry Hampton and his company, Blackside. I went on to help Henry turn his dream Eyes on the Prize into a reality for PBS and was the Consulting Executive Producer for series I and II. (Henry and I also flew together for 20 years and owned a plane together for 10.) 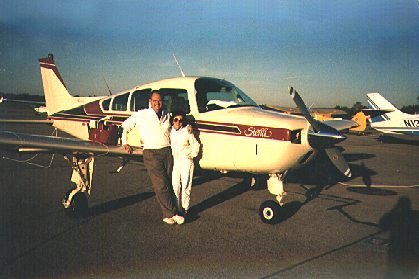 Lillian and MJA in front of Sierra 162, the Beechcraft owned by Michael and Henry Hampton.

In the mid 80s, Phil Morrison of MIT, the first NOVA consultant, came to me with his idea for a series on the nature of scientific evidence. The next years were spent developing and Executive Producing, The Ring of Truth, broadcast in 1987. It was a great chance to bring together many of the NOVA and Odyssey staff again. Working with Terry Rockefeller, Ann Peck, Sam Low, Marian White, Boyd Estus, Eric Handley, etc., has always made filmmaking in Boston such a rich experience.

As a natural arc of my life, I ended my career in the early 90s as writer/producer/on-camera correspondent for a 90-minute Frontline called “Journey to the Occupied Lands,” an investigation of the issues of land and justice in the 27th year of the Israeli occupation of the West Bank and Gaza. It was good to be intimately involved in production again after years of supervising.

All this time was spent in a marriage to the woman some of you knew as Lillian Akel. One of the worlds great romances, our life together ended sadly after an 8-year battle with cancer in 1995. Lillian was a reporter, a radio producer, a teacher, and spent her last and most happy years as an attorney with a clientele that included many of the independent film producers of Boston. Evelyn Sarson, Judy Chalfen, Peggy Charren and Lillian were the founders of Action for Children’s Television. 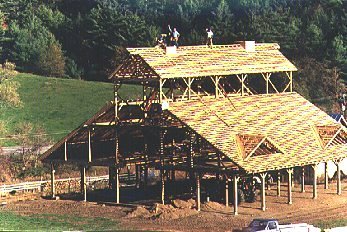 I am now pleasantly retired having discovered the joys of reading American History (1740-1820), helping to build a post and beam barn in Vermont, blue water sailing and white water rafting.

“BFB” Big F’ing Barn, designed by Bob Slattery and built by Bob, several paid Vermonters and several volunteers. I spent 55 days over the summer and fall of ’98 to work through bereavement and bang home the joy of creating something that big and complex. What is it for? Well, Marian White of the news staff and NOVA now raises prize Churro sheep in Vermont and they need a home.

Another way to deal with grief is white water rafting and kayaking. It is very hard to think of anything else except survival in good company miles from the nearest phone in the Idaho wilderness. 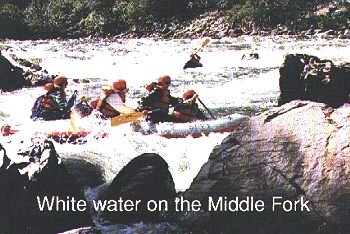 Daughter Julie, after life in TV in Boston and LA, is a happy mommy for a while in Los Angeles. Michael, after years of college and cooking, designed, built and runs the art and animation computer labs for the Pacific Northwest College of Art in Portland, Oregon. Jonathan, who has been restoring and building organs here and on the coast, is living in Philadelphia, but can be found on the road most months voicing organs and writing about them. We will all get together with the grandkiddies for a sailing trip in the BVI to celebrate my 70th this summer.

I’m looking forward to the reunion and introducing you to my new love and best friend Lynn Cooper. Lynn is a clinical Psychologist who has heard about some of you and not heard all your stories about the “goode olde days.” She is a good listener and we hope to have a grand time. 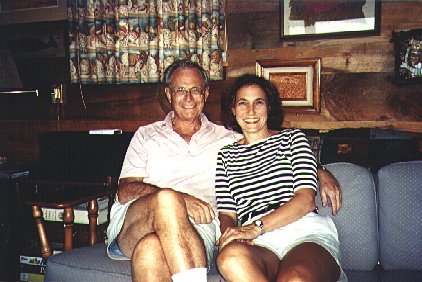 We’ve moved five blocks away from the busy Centre Street home in Newton the family had lived in for 37 years. The new house is on a cliff side overlooking a 70 acre back yard called the Newton Commonwealth Golf Course. Our companions are ducks, geese, one swan, many song birds, a red fox and just last Saturday, a wild turkey.