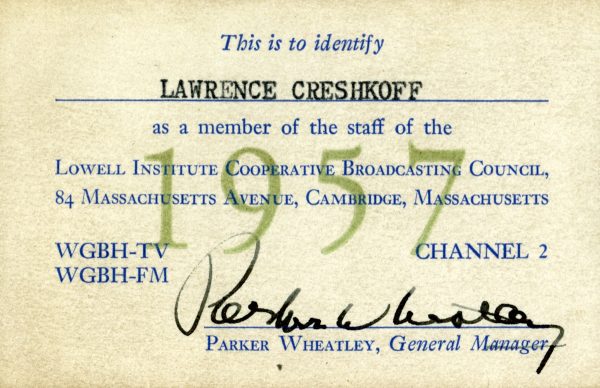 In his piece, One Way to Run a Railroad, Ray Wilding-White observes that WGBH “…was made a reality with hairpins and bailing-wire by the heroic efforts of a bunch of dedicated, overworked and underpaid young maniacs who hardly knew a microphone from a zebra when they started on radio and positively did not know a camera from a Greyhound bus when they went into TV.”

I was one of that bunch of maniacs, having come to work at the Lowell Institute Cooperative Broadcasting Council (LICBC) in July 1947, just out of college, at $50 per week. (Not bad, considering that I was paying only $48 a month for a basement apartment on Commonwealth Avenue.)

My first assignment was to prepare a five-minute summary of news from the Middle East and read it on air (live) at the close of Crossroads of the Future, a weekly round-table discussion program broadcast over WEEI, the CBS O&O station in Boston.

As one of a staff of seven (including two secretaries), I spent the next four years doing a variety of jobs: assistant producer-director, tape editor, publicity writer, administrative assistant to the director, annual report compiler and editor, etc. Twice I spent vacations in New York looking for entrée into the big time, but other commitments kept me from taking the mailroom path to a job at the networks (e.g., “something might open up in October”).

As assistant manager for programs, I worked on the program schedule and scheduled performers — this at a time when there was no budget for on-air talent. Other chores included working with the citizens’ committees that were forming to build public support and raise funds for Channel 2.

A Fulbright Research Fellowship in ’53 led to ten months in Paris (accompanied by a newly-acquired bride and two stepchildren). During that time I served as production consultant to the international exchange service of Radiodiffusion Française, and produced a half-dozen specials for the National Association of Educational Broadcasters tape network.

Returning to Boston in July ’54, I was disappointed to learn that somebody else would be in charge of programming for WGBH-TV, but along with the others of the old crew, soldiered on. Re-tooling Louis Lyons’s news and Backgrounds programs for the shift to TV provided more than enough challenges as we prepared for the launch of WGBH-TV on May 2, 1955.

The “palace revolt” in May 1957 that led to the departure of Parker Wheatley is treated in some detail elsewhere on this site (see the “In Memory” pieces on Hartford Gunn and Parker Wheatley, as well as “One Way to Run a Railroad“).

Ted Sherburne and I wanted us to concentrate on serving the local audience, saving dreams of empire for when a firmer footing in the community had been established. Being fired the day after Parker’s dismissal spared me the agony of deciding whether to stay on when I disapproved so strongly of the way in which that coup had been carried out.

Three months later, New York beckoned with a firm offer: director of a closed-circuit community television experiment sponsored by the Ford Foundation’s Fund for the Advancement of Education. It involved connecting 600 apartments in a public housing project with the local elementary school, settlement house, and public health center — all situated within a two-block radius. Once we got wired and operational, it seemed to me that the job really required a social worker, not a communications person, and I left after two years.

I then joined the Television Information Office (TIO) of the National Association of Broadcasters, which was a promotional undertaking designed to improve the image of commercial television in the wake of the quiz scandals of 1959. (During the period when Hartford Gunn was general manager, WGBH joined TIO, the only noncommercial station to do so.)

TIO opened many doors at the broadcast networks, and in 1964, I went to CBS as editorial director of the corporate information staff. Here my assignment was, essentially, as a ghostwriter for Frank Stanton. It turned out to be an egregious mismatch, and four months later I became what was euphemistically called a communications consultant.

Over the next two years, I ghostwrote speeches for people in broadcasting and other industries; helped design and write copy for industrial sales brochures; was rapporteur for a conference on violence and the media at Brandeis; worked for two weeks as soundman on a documentary film crew; and produced a film on the application of new teaching systems under a U.S. Office of Education grant to Teachers College at Columbia University.

In the fall of ’67, a new company (Visual Information Systems) was experimenting with the concept of narrowcasting made possible with the recent introduction of helical-scan videotape recording, which ultimately led to the VCR. I joined them as director of project development.

The idea — novel at the time — was that TV could now be used to communicate with small, targeted audiences, such as physicians, lawyers, architects, and other professionals, at a fraction of the costs associated with broadcast television. It turned out to be commercially viable only in the field of medicine, where a major industry (pharmaceutical) was promoting its products to physicians entirely through print. The Network for Continuing Medical Education, a bi-weekly medical journal delivered to hospitals on videotape, was the result. I retired in 1994.

All in all, a checkered career. (Even some time in the commercial enemy’s camp.) But for me, nothing that came later compared with the excitement (and fun) of those first ten years in Boston, despite the many frustrations that attended Parker Wheatley’s idiosyncratic leadership style.

LICBC and WGBH in those days were something special, and I look back with pleasure and something akin to amazement. Those of us who were “present at the creation” believed that there had to be a viable alternative to the vast wasteland, and we wanted to make our contribution. That WGBH is still here suggests that we were not completely wrong.