Rambling Reflections on Life by a 74-year-old TV director

I mean, my Dad had this great big console radio sitting in the front room. He was an NBC man. The Nowicki clan next door were a CBS family. People took sides in those days.

My Dad would gather us around the big radio to listen to FDR. I really didn’t understand, but I knew it was important to him, a life long democrat.

My Mom had a Sears radio sitting on top of the ice box. She washed and ironed clothes on Saturdays. Her radio played on and on, talk, a little music, and radio dramas.

Ah yes, radio dramas and comedies. What a time! 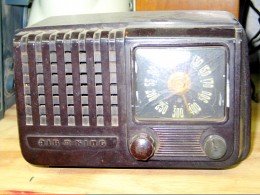 And then, on my birthday, one of the greatest presents of all time. My own little bedside radio!

I had joined the media revolution! Early Saturday mornings, I would tune in the raspy little speakers and listen to “Don McNeil’s Breakfast Club.” I never could understand why he made everyone march around the table before they could sit down to eat breakfast. I didn’t care. I was connecting to the World!

That was followed by “Let’s Pretend!” Great fairytales, brought to dramatic life through the magic of radio!

If you have a moment, take a listen to this classic kid show. Excuse the commercials. And think of me, a kid lying in the dim light of a Saturday (NO SCHOOL) morning, happily creating visions of Jack, the Giant, the Bean Stalk.

No animation could ever compare to what I fashioned out of those voices. It was the magic and the wonder of radio.

Land of the Lost

But most important to me was the show that followed, a show that has stuck with me for all these years. It was called “The Land of the Lost.”

Land of the Lost (excerpt)

How can I explain this to you? The story involved these two little kids who had somehow made contact with a talking fish. The fish’s name was Red Lantern.

And if they could hold on to him, or he gave them something of his to hold, they could breathe underwater. And why would they want to do that? Because all the things we lose up here on earth ends up down there, at the bottom of the sea. The Land of the Lost!

Now, as a kid, I found this mindbending. But what really knocked me out was Red Lantern telling the kids what was actually in the Land of the Lost.

“Remember that paper clip you could not find? Or that marble from your big collection? (and here it came) Did you ever wonder what happens to all those lost moments, those dreams that you forgot, the wasted minutes in your life? Well, they are all down here.”

I began to imagine what it must have looked like, all glistening and wet, caves filled with lost moments, crevices with forgotten dreams, underwater currents filled with wasted minutes.

This surreal idea found its way into my TV work. And in, of all places, a French-language show for kids, Parlon’s Francais. 21 Inch Classroom, 1961.

It was after the fire that destroyed WGBH that we ended up using another TV station’s studio to stage our shows for the 21 Inch Classroom. These are pictures of the last 4 shows of the French Language show, in which we hoped the kids would be able to understand the story told totally in French. 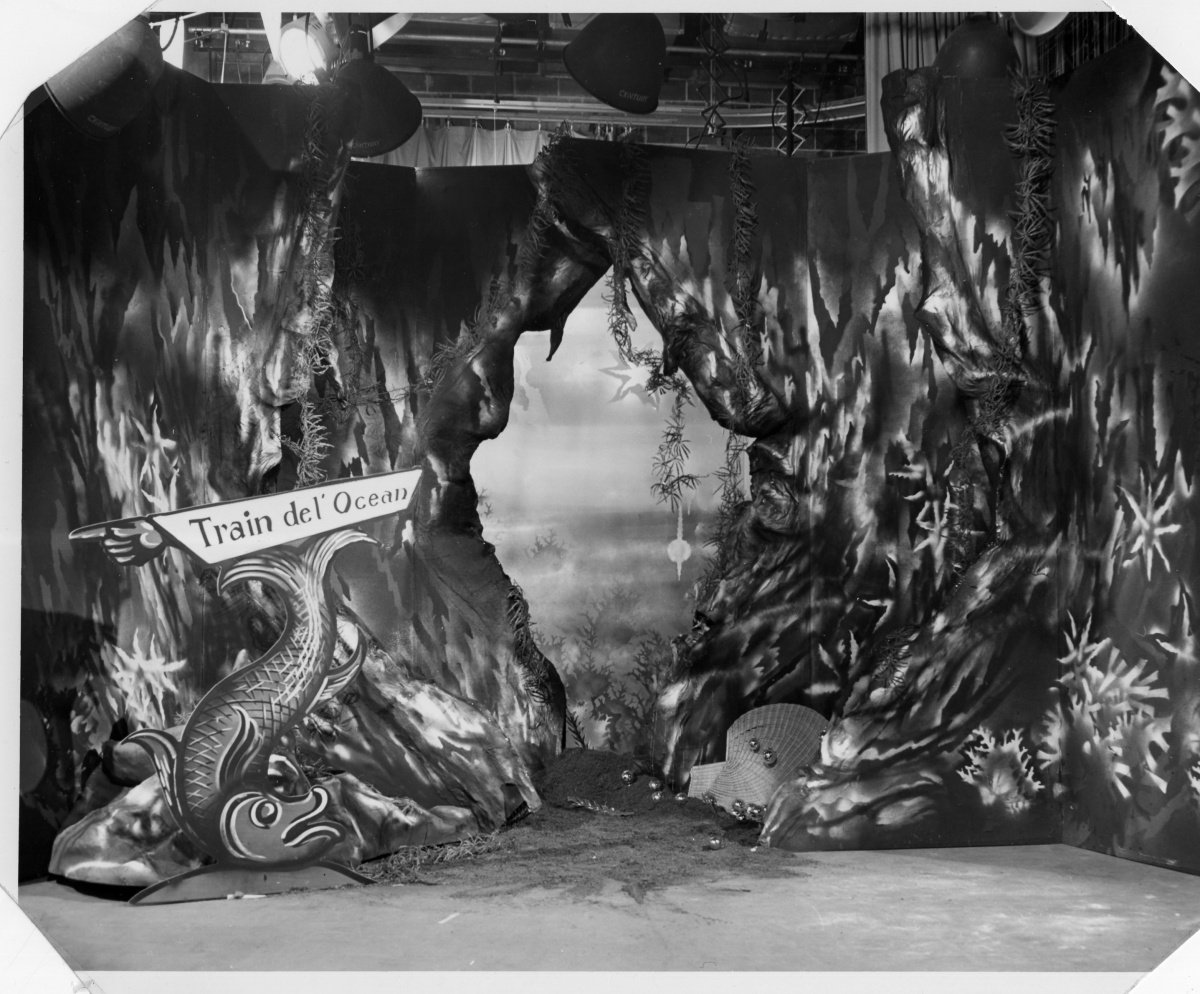 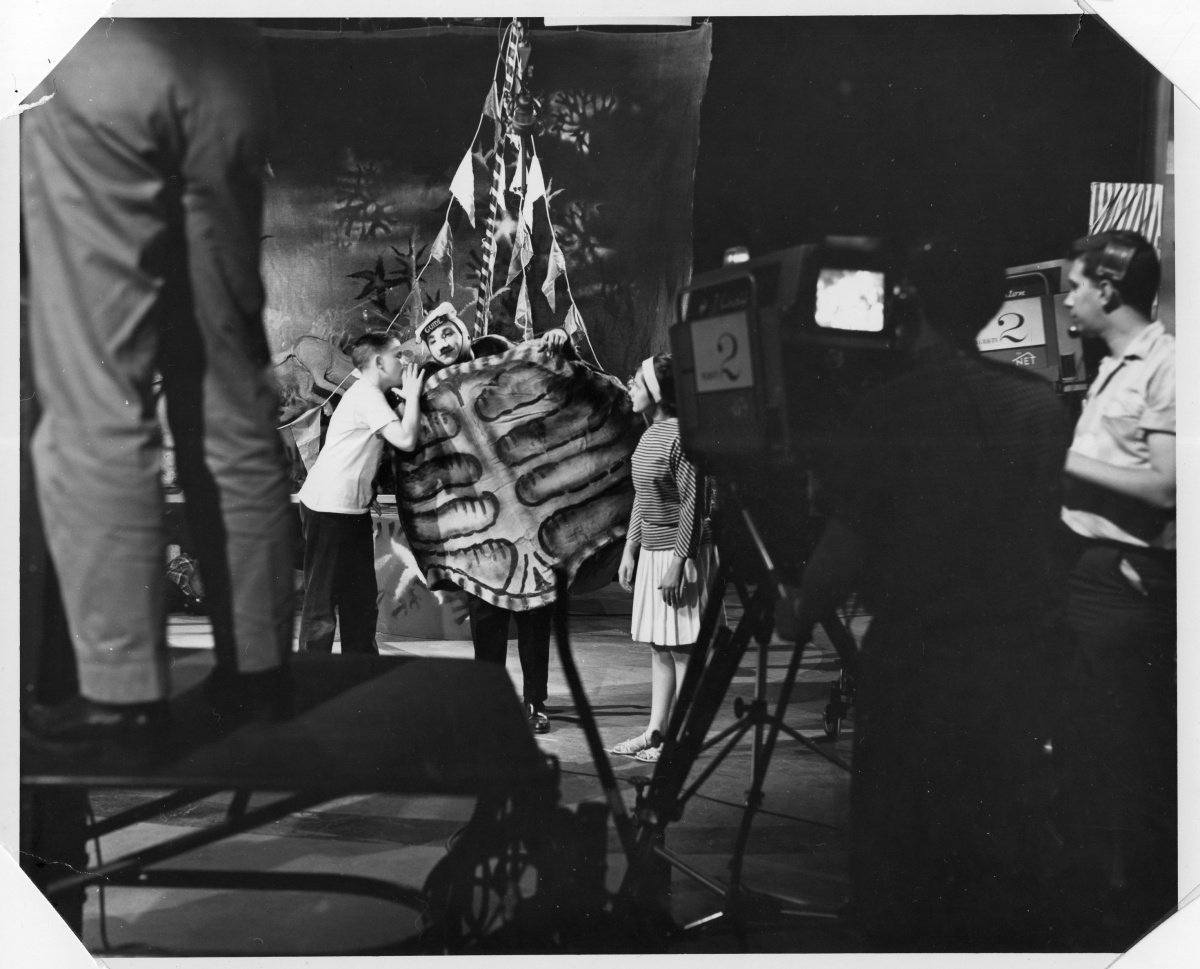 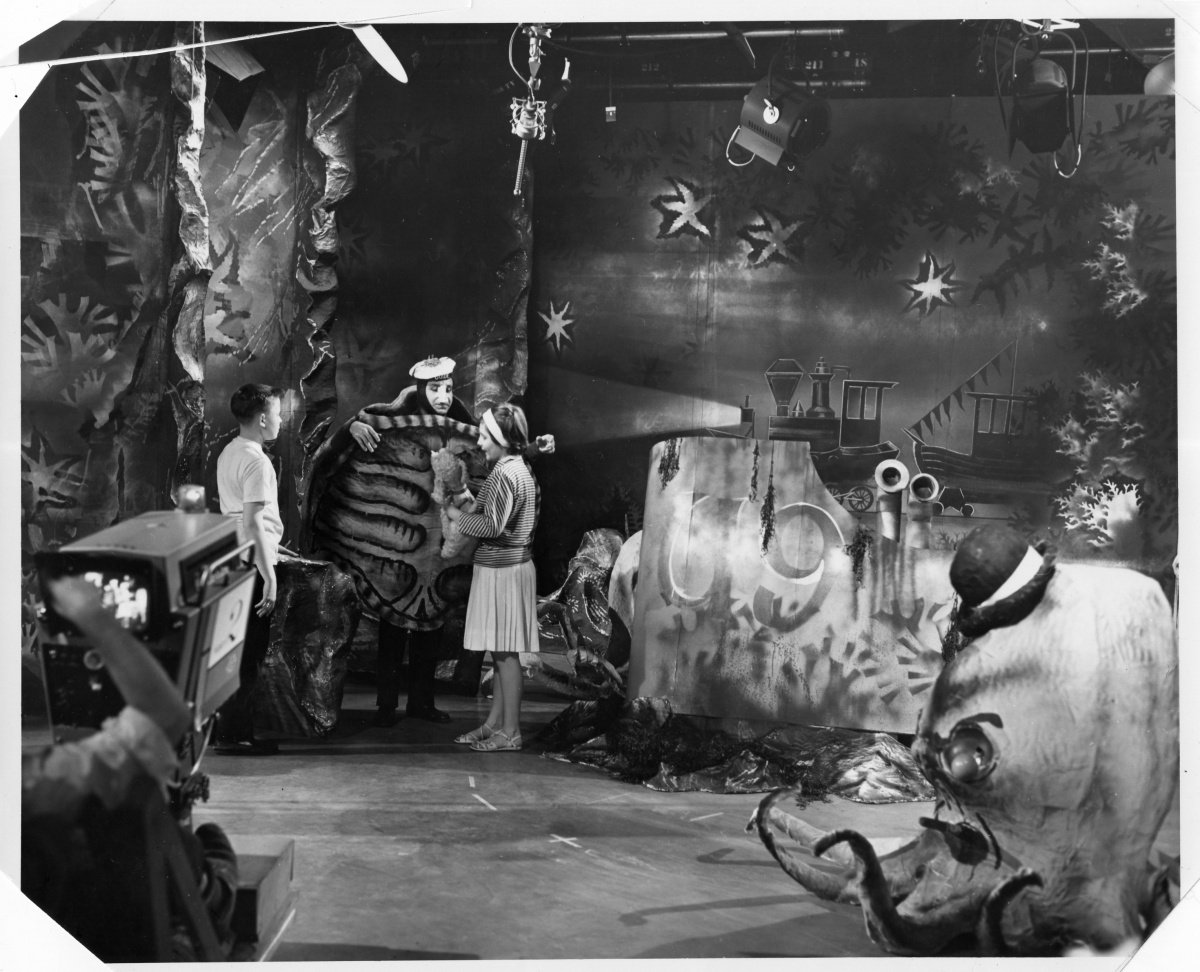 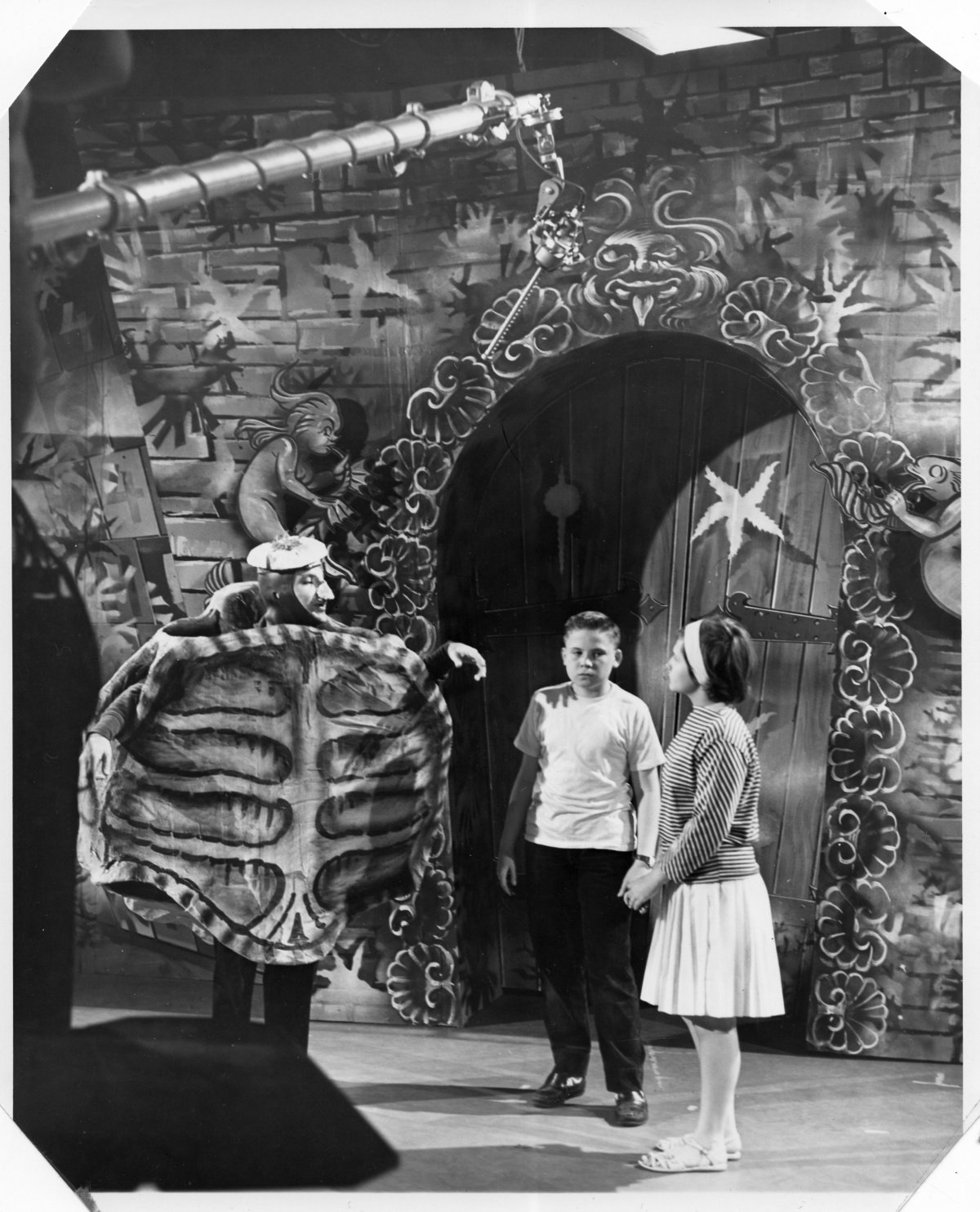 I had taken the premise of The Land of The Lost and changed a few things; Red Lantern became a turtle, and the undersea were reduced to painted sets. The teachers went along with my plan and so I was able to do my homage to my favorite radio drama. It made me smile.

It was 1945 and I thought we had it all. 3 radios; a phonograph that played 78rpm records; we went to the movies almost every week, especially on free dish night; we read the newspaper — for me, it was the comics in the Milwaukee Journal section called the Green Sheet (yes, it was really green).

But we were missing the most important thing. Television! My Mom and Dad had seen one in a department store window. I had seen pictures of it in the paper. And then… 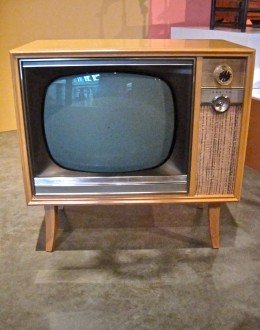 Bang!
Blow it Up! (Booooom!)
Explosions! (Boooom!)
Shot in the chest! (Agggh!)
War games in a back yard under warm dark soot skies
Kids fighting the Big War again, while Mom washes clothes.
Dyin’, collapsin’, writhin’, oh so faux pain!
Laughing, then standing, victorious, shooting imaginary bullets.
Killing over and over. Then dying onto the freshly mowed grass.
Laying there, squinting up at the hot, hazy sun.
The wash swings in the summer breeze…
white, wet, billowing like sails of a distant ship.

Then, there, flickering black and white like a ghost in
the smoky air, a head talking, a mouth we could not hear.
It had arrived, sitting above the bar at Chester’s Tavern.
Could Life be any better?

My Uncle Ed was the first in our family to actually get a TV. After the war, he ended up being a bus driver for the Milwaukee transportation department, but he had bigger dreams. He was going to become a TV technician and make big money.

His first TV was a Muntz, it’s screen size was 9 inches. He was very proud of his new TV and invited everyone over to watch it. The extended family descended on his little abode, one of those hastily put up shacks that veterans got when they got home from the War. There we were, all stacked together, staring hard at the little screen.

But Uncle Ed was ahead of his time and he had anticipated people complaining about how small the screen was. So, he picked up a huge magnifying glass and mounted it on the front of the TV.

Now, for those fortunate enough to be sitting directly in front of the TV, it was great. But we kids, regulated to the sides, the picture was distorted and unintelligible. Some family members say this is probably where I got my interest in video art. Could be.

This is a work by Nam June Paik. [intlink id=”6428″ type=”post”]I helped him and 5 artists take control of TV[/intlink]. It was supposedly the first time. It was called Medium is the Medium.

My public grade school was called the Oklahoma Avenue School.

Mr. Geil was our principal. Short, glasses, always seemed to wear a grey suit. It was the right color for him. He was kind of a grey man.

Then the rumors began. It was said that during the summer hiatus he would go to New York City, go to plays, visit museums, and nightclub with the sophisticated people. I didn’t really believe it. 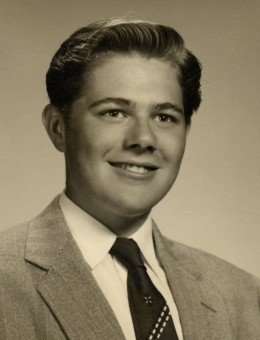 But then, as I entered 7th grade, Mr. Geil called the entire school into our auditorium. He announced that as of that day we now had a school song. He spent the next half hour teaching us the song. Somebody said it was from a Broadway Musical.

Our school song was a Broadway Musical Song! Show business had come to Oklahoma Ave. School!

What the hell were Sooners anyway? It didn’t matter. We had a school song. We sang our lungs out, proud as anything!

And Mr. Geil had another surprise up his sleeve.

I learned many lessons here. Most importantly: a simple rule. Those who have access to information others don’t have, rules the roost. Or something like that.

It was in 6th grade, first day back from summer vacation, and Mrs. Anderson asked each of us what we had read during our vacation. When it came to me, I proudly proclaimed that I had just finished Don Quixote.

The look on her face was something I will always remember. Shocked, disbelieving, she questioned me about the story. I rambled forth a pretty good synopsis, if I say so myself. You know, good old Don and his servant attacking the giant windmills they believed to be giants.

Stunned, she moved on to others. Later that day as we were moving from one class to another I saw her whisper to another teacher while pointing at me. They must have thought I was some kind of genius, a budding A student. Nope. 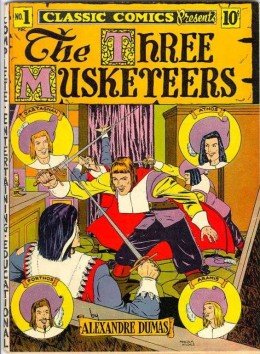 You see, Classic Comics had just started publishing. My Mother thought it would be good if I read the classics… comic book style. I read all the greats, and it only cost 10 cents a pop!

I probably started realizing it right then and there. Here I was, a true literary phony, and yet somehow I didn’t get caught.

I began to realize how unbelievably lucky I was. And amazingly this luck has stayed with me all through my career. Why? I don’t have a clue.