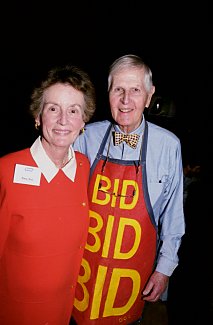 Patsy and David Ives at the April 2000 Reunion

At this Wednesday’s Annual Meeting of the full WGBH Board of Trustees, David Ives will step down as vice chair of the Board and chairman of the Executive Committee, taking on the new title of vice chairman emeritus.

“David has been a vibrant part of WGBH since 1960, and we welcome his continued involvement,” says WGBH President Henry Becton. “But he’s decided the time has come for his role to shift to a less hands-on one.”

The Trustees will honor David for his years of service on Wed night. Staff will do the same next Mon, 2/12 with a room naming and a toast. On that day, a tribute page will go live on InnerTube for sharing anecdotes and memories from the “DOI era.”

David came to WGBH in 1960 as director of Development. Ten years later, he stepped up to the presidency. For the next 14 years, David led the station to become a major force within the national public television and public radio systems. At the same time, he never lost sight of WGBH’s community roots, assuring a place for strong local programming.

“Succeeding David in 1984,” Henry notes, “I was acutely aware that I had big shoes to fill — or perhaps, a big bow tie. Over the years David, more than anyone, has personified all the good things our audiences believe about WGBH. He has been our greatest champion, a tireless and persuasive fundraiser, and a thoughtful leader.”

David earned public broadcasting’s highest honor, the Ralph Lowell Award, in 1985; in 1988, he received the Governors Award of the New England Chapter of the National Academy of Television Arts and Sciences.

As mentioned, the staff at QuickNooz is putting together a tribute page for David on InnerTube (the internal network/web site for employees), which will serve as a place for his colleagues and friends to share “DOI” memories and anecdotes.

The site can only be seen from inside the WGBH network system, but having input from alumni would really enrich the content. If you’d like to participate, or know others that would, please e-mail messages to or the QuickNooz account .