Skip to content
Stories > QuickNooz
This entry is part 4 of 24 in the series The Fred Barzyk Collection
Reading Time: 3 minutes 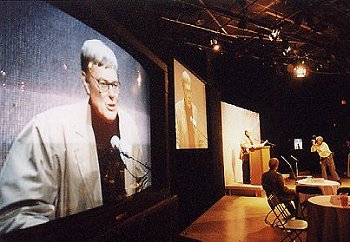 At first glance this man looks sane enough. In fact, his lifelong career has been skating the crazy edge of the barely possible, a madcap minister to the risky marriage of art and broadcast. And it’s won Fred Barzyk (shown here speaking at the 2000 Reunion) yet another round of honors.

In 1998, the WGBH Archives, under a grant from the National Endowment for the Arts, moved to preserve several inNOVAtive and experimental video art series, many of which were produced and directed by Fred. The goal of the project, called the New Television Workshop Collection, was to organize the programming assets and create a Web accessible guide to the video art series New Television Workshop, Rockefeller Artists-in-Television, Artists’ Showcase, Music Image Workshop, Dance for Camera, Framee of Reference, VIsions, Alive from Off Center, Soundings, Poetry Breaks and The Contemporary Art Television Fund.

This summer, that collection is being shared with the museum patrons of Milwaukee in an installation of Fred’s work at the Haggerty Museum. 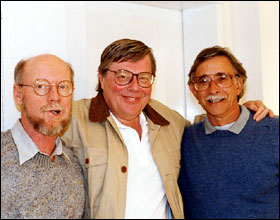 From the Decordova Museum

The Search for A Personal Vision in Broadcast Television: Fred Barzyk

The exhibition The Search for A Personal Vision in Broadcast Television: Fred Barzyk brings to the forefront the dramatic changes occurring in television through artists’ experiments with broadcast television and the development of video art.

The television, first introduced in the 1930s, has become a medium of unparalleled influence shaping much of America’s history and culture. In the late 1960s, some of the most inNOVAtive experiments in television broadcasting were occurring at the public television station WGBH-TV in Boston.

Under the direction of Fred Barzyk from 1959, the WGBH television studio sought to introduce new approaches to television programming. It brought together artists, choreographers, photographers and writers, and encouraged experimentation. It pioneered the use of new technologies and broadcast many of the resulting programs nationally.

The Korean-born artist Nam June Paik became an artist-in-residence working with Fred Barzyk at WGBH, Boston in the early seventies. During this time, Paik and Shuya Abe built the video synthesizer used to create some of the first artist videos including The Medium is the Medium (1968), Paik’s Video Commune: The Beatles from Beginning to End (1970) and Tristan and Isolde (1973) by Ron Hays.

The exhibition includes several broadcast firsts such as Jazz Images (1961), dubbed the first attempt at video art on broadcast television, and the double channel programs from the late sixties. The first TV series shot with a portable broadcast quality camera occurred in 1972, when Fred Barzyk and Jean Shepherd went “on the road” to produce Jean Shepherd’s America. In 1978, the first interactive TV drama aired on public television.

The environment at the WGBH New Television Workshop fostered the early videos of Nam June Paik, William Wegman, Peter Campus, Bill Viola and Patrick Ireland in the exhibition. William Wegman came to the Workshop’s studio and created Man Ray, Man Ray (1978), a video narrated by Russell Connor, which intermixes the biography of the famous photographer with that of his dog. In Peter Campus’ Three Transitions produced by Barzyk, the artist not only demonstrates the use of a chroma-key or two camera set-up, but challenges traditional ideas about painting, sculpture and photography by demonstrating that video can capture the very process of creation.

During the 1970s and 80s, the art of capturing movement and dance on camera was the focus of the Dance Workshop at WGBH. The contributions made to dance by choreographers Trisha Brown, Rudy Perez, Dan Wagoner, Louis Falco and Mimi Seawright are presented in the video wall of dance in the exhibition.

As a producer and director, Barzyk was instrumental in bringing such literary work as Charles Johnson’s Charlie Smith and the Fritter Tree, Ursula Le Guin’s The Lathe of Heaven, and Kurt Vonnegut, Jr.’s Between Time and Timbuktu or Prometheus-5 to television. He was equally resourceful in creating such original documentaries such as Negro and the American Promise (1961) and People (1975).

Fred Barzyk, a Marquette University graduate, was founder and first director of WGBH New Television Workshop in 1967. For his work in broadcast television, Barzyk has received the Venice Film Award, three Emmys, two ACE awards and the George Foster Peabody Award from the University of Georgia. He is currently president of Creative Television Associates.

Exhibition Sponsors
Andrew W. Mellon Fund of the College of Art and Sciences
Wisconsin Arts Board
An Anonymous Donor