(This piece is presented as written by David, and presented on his Web site. It is used with permission)

Just back from London and the Service of Thanksgiving for the Life and Times of Alistair Cooke last Friday. 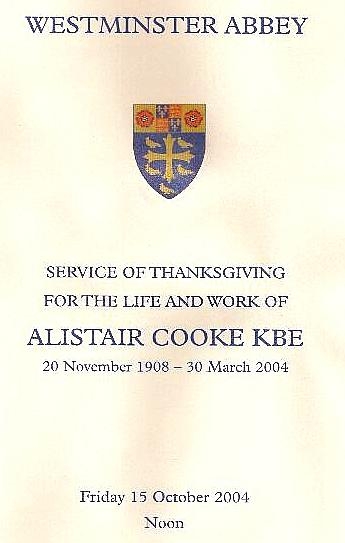 I don’t know why I went; there were few GBH types there other than Rebecca Eaton and Henry Becton and there was no communication in advance other than the email invitation and the letter with the tickets. I guess I figured that if I missed this, regardless of the cost, I’d be regretting it the rest of my life. And I don’t need any more regrets. Now, upon returning, I feel the same. After all over the twenty odd years I was privileged to roll tape on what has to be hundreds of Masterpiece “intros”.

Here’s a Maine Yankee’s view of the service:

Since I’d never seen or been to Westminster Abbey, the whole experience was starting from scratch. Christine and I taxied just in time into a snaggle of other taxis, coppers directing each to a spot, outside the gates at the Great West Door, as prescribed by the pink ticket. As scripted I’m sure, a light rain was falling. It was all a rush, paying, getting the umbrellas out, fumbling for the pink tickets plus the requested passport. 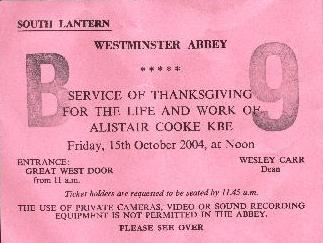 The tickets did just fine, no passport necessary. Against a wall on the right was a line of still photographers plus one video camera.

One imagines, never having been there, the Abbey to be cathedral-like, cavernous, and it was. I imagined there would be a few folks gathered in a corner for this service but was I very wrong. Temporary seating was set up on every available floor stone and marker.

As we walked in I mostly expected to see Christopher Sarson, Masterpiece Theater’s first producer sitting comfortably in the Abbey with his feet on the stone marker of some English poet, grinning wickedly.

We were quickly ushered through the nave to the south transept and then to row B9 as stamped clearly on the ticket. 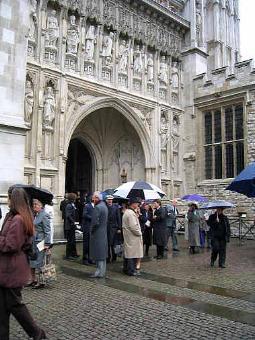 In front of us at the crossing was the BBC orchestra, as best I could tell about 60 pieces, playing some of Alistair’s favorite’s: Handel, Gilbert and Sullivan, and more Handel.

The hundreds near us all being directed to their rows looked as if they had come from their country cottages or straight out of a modern Holmes mystery. There were frock coats, silver things hanging on chains around necks, women’s hats that could have come from from the 20’s. I have not the faintest idea who they were but they looked like earls and lords. One young gentleman had a thick pony tail, a cloak, with a handsome lady trailing kept working the aisles looking like he’d lost his baronage.

After the dignitaries – The US Charge D’Affaires and the Deputy Lord Mayor of Westminster – were seated somewhere in their “Stalls”, the first voice was – as if he’d written it for the occasion – Alistair’s. I suppose the recording was taken from a Letter but it was so perfectly chosen you thought, you knew, he had this very scene, this audience, in mind when recording. As I remember it he welcomed us, apologized for not being there in person, and paid tribute to the value of not seeing him.

We did sits and stands, Introits, Hymns and, Biddings, The Lord’s Prayer. Son John Byrne Cooke read from Isaiah 40 25:31. Psalms were sung, Rebecca Eaton did a reading from Corinthians with conviction. Then his granddaughter Jane played beautifully a Bach piece with the BBC Orchestra. Peter Jennings climbed into the Quire Pulpit and gave a wonderful tribute reminding us that Alistair was an American and how moved he was to see the Stars and Stripes flying over Westminster on entrance. The Director-General of the BBC spoke from somewhere and was charmingly humorous.

More hymns and prayers led to Jacqui Dankworth singing beautifully (from somewhere) with only piano accompaniment the Gershwin’s “Someone to Watch Over Me” That was as close to emotion as it got and that piece, probably a stranger to the Abbey, felt just right. I pictured Alistair as the pianist which of course he could have done with ease. A prayer, the choir sang Handel’s Hallelujah chorus from The Messiah, a blessing and we all got to sing The Battle Hymn of the Republic (I didn’t realize Alistair had such Northern leanings) . 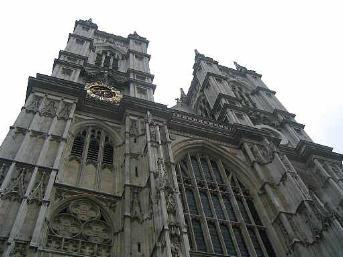 The orchestra played and by section we were ushered past (and on top of) England’s history back to the Great West door. It was quite impressive, beautifully done, perfectly smooth. The imposing Abbey was warmed by the music, his choices so the programme told us. Plus it was produced to the second. You would have guessed there were four rehearsals to get such precision. I looked at my watch as we filed out: 1:00PM exactly. The bells of the Abbey Church were ringing furiously.

Somewhere in that intricate interior the late Joan Wilson (Masterpiece Theater’s second producer) must have been perched, listening in, perhaps with Alistair beside her, the two of them in hysterics.