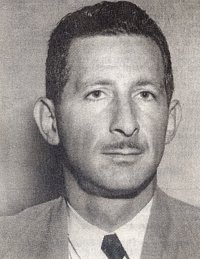 Robert Baram was a journalistic jack-of-all-trades who wrote of life in the South during the early days of the civil rights movement, penned a syndicated column in Bay state politics in the 1950s and ’60s, and offered political commentary on WGBH-TV for many years.

“He was a giant,” said James Thistle, director of broadcast journalism at Boston University and former news director of at Boston channels 4, 5 and 7.

“He always did his homework, and he never took a cheap shot in his life,” Thistle said.

Mr. Baram was born in Newark, NJ. He earned bachelor’s and master’s degrees at Boston University.

In 1956, at the invitation of the governor of Mississippi, Mr. Baram and 18 other representatives of the New England Weekly Press Association toured the state to report on the racial climate. Mr. Baram wrote a series of dispatches on the trip for the Boston Globe that were published under the headline “Yankee Editor Looks at Mississippi.”

“He had a magnificent, stentorian radio-television voice,” said Boston University professor Caryl Rivers. “He really had a kind of stature, more BBC than ‘GBH, but he was also extremely genial and fun to be around.

In the 1960s and 70s he delivered a series of commentaries called “New England Views” on a nightly news show hosted by Louis Lyons on WGBH. When Lyons took a day off, Mr. Baram was the show’s host.

In a story on WGBH coverage of local elections published in the Globe in 1966, Mr. Baram was described as “a walking encyclopedia of the political situation, particularly out in the sticks.”

In 1969 Mr. Baram moderated a televised debate for Boston City Council candidates. In 1978 he was moderator of the televised gubernatorial debate between Governor Michael Dukakis and challengers Edward J. King and Barbara Ackerman.

He taught at Boston University for 40 years until his retirement about 10 years ago. “When you really wanted to learn how to create a piece, you went to Bob,” Thistle said. “It didn’t matter whether it took 15 minutes or an hour, he took his time.

A tall man with a shock of gray-white hair and a distinguished mustache, Mr. Baram had impeccable cable style, giving lie to the stereotype of the shabbily dressed journalist. “He really dressed beautifully,” Rivers said.

For more than 30 years Mr. Baram was executive director of the New England Scholastic Press Association, a free service sponsored by Boston University to provide information and counsel to high school newspaper advisers and students.

Mr. Baram often invited students to his office to show them the journalistic ropes. Sometimes he fielded phone calls from home late at night, such as when a high school student became nervous about something that was about to be published. “He wanted to give back to the profession, and he gave back in spades,” Thistle said.

Mr. Baram leaves two daughters, Deena Ferrara and Ava Sarafan, both of Acton; and four grandchildren. Services have been held. Burial was in Belt Olam Cemetery in Wayland.