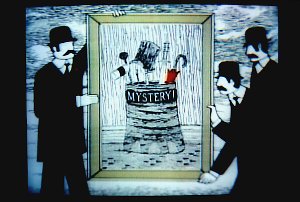 “Derek was a delight to work with and a beloved member of the WGBH family,” says Mystery! ’s executive producer Rebecca Eaton. “Thanks to his inspired animation of Edward Gorey’s charmingly macabre illustrations, the Mystery! open is still a classic of television art.”

Lamb played a large part in Henry Becton’s coming to WGBH. “Somewhere during my second year at Harvard Law I became pretty sure I didn’t want to be a lawyer,” Henry recalls. “We were allowed to cross-register for courses at Harvard College. I wanted to take photography, but I was told only undergraduates could take that course. The photography professor suggested I go see the guy who was teaching an animation workshop. I didn’t know if I was interested in animation,” he recalls.

“But I went down the hall and met this professor, whose name was Derek Lamb. In that course was Christopher Sarson, a producer at WGBH who was continuing his education. I made several short, pixilated-animation films.

Henry Morgenthau, also a WGBH producer, visited our class. He had a weekly series called Flick Out that was a showcase for independent film. He included some of the films from our class — mine among them — in the series. After law school,” Henry adds, “I taught school for a year. Then I decided filmmaking was kind of fun. And so, in 1970, I actually got a paying job at WGBH!”