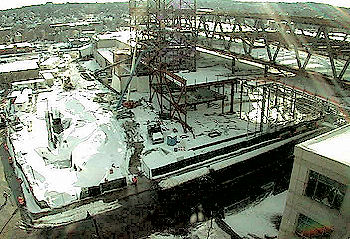 Brighton Update: If you’ve been following the progress of the new WGBH HQ either in person or via the Webcam on Innertube and at campaign.wgbh.org (then select Webcam), you’ll notice that the trusses for the two-story beam are now in place. This allows for the pouring of the final piece of the foundation: that of the Mugar TV Production Center.

Named for WGBH trustee and longtime supporter David Mugar, the production center encompasses both Studios A and B and their control rooms. Stay tuned for more news on the building construction, which remains on track for a December 2006 move-in date. 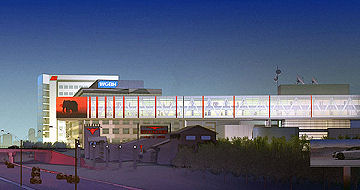 As you may already know, in 2006 WGBH will move its operations to a completely modern facility. To quote the WGBH Campaign web site:

“WGBH’s consolidated new studios at 10 Guest Street in Brighton will be a lively production center and Boston landmark. Dynamic architecture will welcome the public and make more transparent the excitement behind the scenes. “Green” urban design will signal WGBH’s respect for the environment and the community we serve. 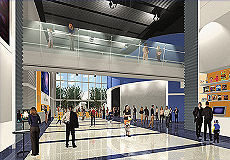 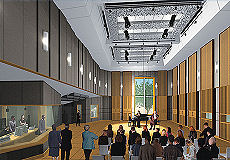 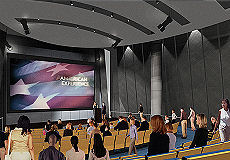 “WGBH’s current facility in Allston was built for another era, based on a broadcast model that no longer applies. Until now we’ve been able to adapt to the evolution in technology. But the new digital broadcast standard to which all broadcasters must comply requires a revolution, a seismic change.

“Converting to fully digital operations would have necessitated that WGBH strip down to bare walls and start from scratch. Happily, we instead have an opportunity to create a brand-new, all-digital infrastructure that supports today’s audiences and the way programs now are created and distributed.

“Technology has caught up with WGBH’s aspirations and broad-based educational mission. Breaking New Ground: The Campaign for WGBH will enable our facilities to catch up with technology and anticipate further change, ensuring that WGBH can seize new opportunities as they emerge—long into the future.

“Stay in the know with updates on our programs and information on our fundraising progress for the new WGBH Brighton studios.” 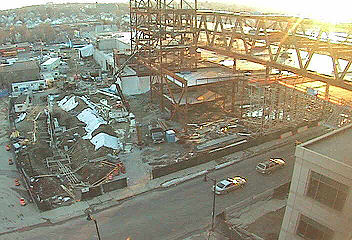 As Ralph Schuetz so eloquently put it…

“I followed Fred’s Nooz link to the posting of the new building webcam and subsequently surfed most (if not all) of the campaign web site, http://campaign.wgbh.org. Wow! Henry Becton looks good with a hard hat, and that’s going to be one beautiful new facility…not unlike 125 Western Avenue when I was hired…in 1968. Of course I couldn’t miss the fundraising appeal. So I thought…I owe a lot to WGBH, where I started my 37 year career in public television. I haven’t been a “member” of WGBH since we left Boston.