Here are some [stories] from the very first days of WGBH-TV that may interest the oldies and provide images of the primitive days of TV for the young.

During the first year WGBH was on the air, an early Discovery program with Mary Lela Grimes was on New England snakes. Events then were live. The opening teaser was to be a CU of a hand picking up a sizable garter snake in the autumn leaves. The camera was to pan up following the hand lifting the snake to face of MC (me).

The camera did not pan up. I waited and filled time. The floor manager frantically gave an unfamiliar camera sign, pushing down with both hands. The camera remained on my hand and snake. All the crew began hand signals pressing down. I looked down. The snake’s tail curled under my dress and pulled it up to create a leg show.

Bob Squier began his career in television as a working cameraman at WGBH. Among his assignments was the Discovery show.

The second year of production we became sophisticated enough to build a 15′ x 15′ New England Bog filled with authentic live material including animals and plants from a Leonminister Bog. It was fantastic, very visual with pitcher plants, sundew, frogs, salamanders and wet.

Hartford had just added a wonderful new piece of studio equipment – a boom for the camera that could obtain those unusual perspectives. Bob wanted to do the boom camera. We were recording, not live this time.

Just as we came to the last five minutes, the boom swung around to get a jumping frog. Bob lost control and plunked head down to join me and the frog in the New England Bog. After many laughs and much unhappiness from the bosses, we had to begin again another recording session.

If I remember, Bob did not like the boom so much after that.

A number of scientists, then famous and now famous, were guests and advisors on Discovery.

One was Dr. Donald Griffin who discovered echo-location in bats. Another was Roger Payne who discovered the songs of whales (then a graduate student). Graduate student Tom Eisner, later the discoverer of pheromones in insects once showed the active life inside a termite gut, and Charles Walcott, still researching some final answers on bird navigation, filmed the birth of a bat.

The program Dr. Griffin assisted with became quite well known in Boston. We had erected strands of wire three inches apart within a large cage, set speakers to receive the high frequency emissions of bats as they avoided the wires and could therefore easily show how their flight pattern related to the high clicks they emitted in order to detect obstacles as small as thin wire. Or translated to detect a small insect’s presence as food.

Some bats escaped. We were in one large studio at 84 Massachusetts Avenue, back to back with the popular newscaster Louie Lyons, Curator of Neiman Fellowships at Harvard. Louie came to his set and began the the news.

We had no time to retrieve the escaped bats. They began swooping and diving throughout the studio, across the cameras, in front on Louie, faster and faster as the lights warmed them. In good performance tradition Louie ignored them for a while. The director kept yelling at us. ‘Get them out of there.’

The boom camera Mary describes was the Huston Fearless Panoram Dolly, a piece of film studio equipment that found wide use in the studios of early television.

Now, Mary’s story involves the “unmodified” version, which had a minimum lens height of 18 inches and a maximum of only 6 1/2 feet. It was only marginally more effective in that respect than the standard studio camera pedestal — but far more dangerous.

The crane arm (the “tongue” as it was called) was controlled in vertical movement by a hand crank which made camera elevation changes a bit stodgy, but very predictable. The “tongue” was, however, mounted on a virtually frictionless turntable which, if it was not carefully handled, could instantly swing to one side or another leaving the cameraman either chasing helplessly after the camera, or in deeper doo-doo — and that was what happened to Bob. 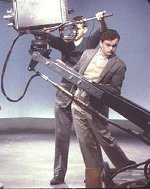 The incident I’m about to relate involved the so-called “long-tougue” modified Fearless (shown here). In preparation for the production of “A Time to Dance,” Greg Harney had ordered a kit from Camera Equipment Company in New York which would, as he had seen at CBS, vastly extend the capabilities of the dolly.

The kit consisted of a three foot extension to the boom arm, a ponderous lead counterweight, and some beefed-up springs. I performed the modification, which also included removal of the elevation hand crank, and any control whatsoever on the turntable.

The result was absolutely stunning. The tongue could be raised and lowered through the whole vertical range (18 inches to 9 feet!) using just the pressure of one’s hand. And horizontal movement was just as fluid — making it possible for the cameraman to cause the camera (all 100 pounds of it) to virtually “fly.” The Fearless became the most beloved of sub-crane-sized camera mounts because of the incredible freedom it offered through an unprecedented range of camera movement.

Heaven for the dedicated cameraman — but nothing is without its price. The trade-off for all that flexibility was the necessity of exercising extreme caution in controlling the instrument. Screw-ups were the least of the danger. Serious injury was an ever-present possibility for the camera operator.

This long lead-up lays the groundwork for understanding what happened to Frank Vento one night on a live presentation of “Performance.” I was running camera 1, on a pedestal, and Frank was operating camera 2 — the Fearless crane.

Somewhere around the middle of the show, Frank was doing a slow dolly-in with the crane extended all the way up to maximum camera height — a position which obliged him to balance precariously on a couple of rungs of the tongue, and hang on for dear life.

While repositioning my camera, I heard a zip-clank-BANG-CRASH and, glancing at the studio monitor, saw the picture from Frank’s on-the-air camera which was now pointing almost straight upward. Swinging wildly from side to side, the camera was panning the light grid, the microphone boom, and virtually all of the studio except the performers.

About six feet behind the dolly, lying flat on his back on the floor was poor Frank, his face reflecting an odd combination of stark amazement and something like beatific rapture (I think the fall nearly knocked him out).

His headset was dangling from the camera, which was, at this point, exercising a completely deranged mind of its own. Apparently the crane had begun to swivel. In trying to shift his weight to regain control, Frank had lost his grip, and tumbled helplessly out into mid-air, narrowly missing the person pushing the dolly.

I fumbled up a usable shot, and the director quickly cut to it. Frank got up from the floor, brushed himself off, checked for injuries, and finding none, remounted his unruly steed to finish the program.

Ah, for the days of live TV.