From the collection of Al Hinderstein 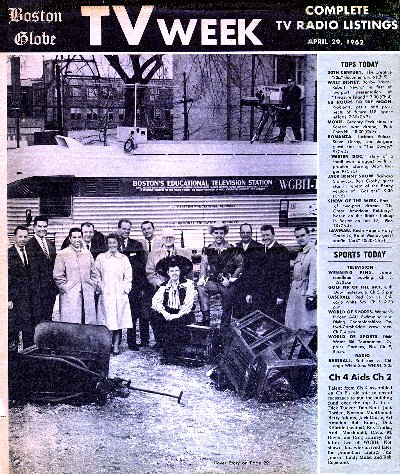 Dave Davis and Greg Harney on the far right, Hindy with the camera on the roof of the bus.

(This picture was taken at the 84 Mass. Ave. site. That’s the charred TV master control console in front of Dave and Greg, and the base of the Mole-Richardson microphone boom to the left. Is that one of the studio cameras that Pablo is siting on?) 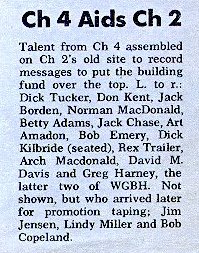 “A Friend in Need Is a Friend Indeed”
Hazlitt: English Proverbs

As often happens, it takes a disaster or some adversity to find out who your friends are.

In an age of what’s supposed to be cut-throat competition, Boston’s Educational station not only got immediate support from its competitors when Ch 2 was gutted by flames last October, but every day since that time appeals have gone over the air to help Ch 2’s building fund, and they’re still being heard.

The front cover picture of this issue of TV Week was taken on a cold, windy day a week ago when all of the “name” people from Ch 4 gathered on a muddy vacant lot in Cambridge to record fund-drive appeals for Ch 2. They shivered in the raw wind that swept across the M.I.T. campus on Massachusetts Ave., the spot where WGBH’s studios once were.

But their voices were firm and their enthusiasm apparent as they recorded messages urging everyone to help push WGBH over the top in its drive for new studios.

It took the fire that wiped out Ch 2’s facilities to show the educational station, to its wonderment and delight, just how much it is valued by the people of this region.

In the chaotic hours while the ashes smouldered and the result of 15 years work lay in ruins, offers of help came so thick and fast that WGBH could hardly handle them.

Yet none was so important, just then, as the help of all three of Boston’s commercial TV stations. If it had not been for WBZ, WNAC and WHDH, and for a remarkably lucky dovetailing of their equipment availability, Ch 2 could never have resumed its school programs at 8:30 Monday morning, after losing only a single broadcast day.

Perhaps even more significant over the long run has been the constant barrage of appeals to the public for funds, not only over Boston’s three commercial TV stations but over every radio station in eastern Massachusetts.

The campaign is still going on, as our cover picture attests, and it is reaping benefits not only for WGBH but also for the stations that are airing the appeals. The stations are earning the deep gratitude of the entire region.

For example, a woman from Waltham wrote WGBH: “I think it is simply wonderful the way other stations are helping you out. More power to them and to you.”

Ever since the fire, Ch 5 has made available to WGBH one of its main TV studios. The 21-Inch Classroom programs are videotaped there. The work is usually done on week-ends, and sometimes WGBH crews work there until the small hours of the morning to finish the taping of these programs.

Ch 2’s main temporary studio continues to be at the Catholic Television Center on Bay State Rd. Every Monday, the WGBH crew carefully takes down the chapel used for the TV Mass on Sundays, and every Friday the men put it back together again.

It’s been six months since the fire, and it will be many more months before WGBH is back in the studios of its own. But no one at the station will ever forget the letters that have poured in from Boston, from the suburbs, from other New England points, and even from former residents of the area in London, Honolulu, the Philippines and Saudi Arabia.

Among the most valued letters are those that compare the Boston area with a region that does not have a WGBH. “I am a newcomer to Boston (from Dayton O.) and I am completely enchanted with Ch 2. Never thought anything so sensible and satisfying could ever happen on TV,” said one.

And from a family that has moved to Fort Leavenworth Kan.: “We find that of all the things we miss about Boston, WGBH and Ch 2 head the list.”

A third letter, from Avon Park, Fla.: “There is nothing elsewhere like WGBH and I look forward to enjoying it when I return to Boston.”

Or maybe donations from children are the most cherished. From Miss Jackson’s second grade, at the Spaulding School in Newton Centre, came a copy of the grade?s newspaper, for which ads had been sold and the proceeds ($10) donated to WGBH.

Fifth grade pupils in tiny Tisbury on Martha’s Vineyard filled a bushel basket with canned goods and home-made jelly. They sold chances. The result: $28.40 donation to the station.

School children in Somerville collected an astonishing $1,457 for WGBH. From Gloucester, a 10-year-older wrote to Harvard’s Professor (Emeritus) “Cap” Weston, who teaches him nature studies by TV: “It’s a very nice program,” he said. “Our teacher couldn’t catch a snake or a bat, so it’s also good for the teacher.”

The variety of giving to the station rebuilding fund is extraordinary. A publishing company gave $5,000 and a group of secretaries in the same company gave $75.

The State Labor council of the AFL-CIO gave burg gave $5 (sic). Other contributors include PhD’s (sic), the corner grocery store, the retired in nursing homes whose only income is from Social Security and presidents of major corporations.

It’s no wonder the Ford Foundation felt that the community response deserved support. It is now matching every contribution received. In the last six weeks, WGBH has managed to raise two-fifths of the $500,000 grant from the Ford Foundation, and the station has high hopes it will be able to match the remainder soon.

One exuberant correspondent wrote recently, “Hurray for the Ford Foundation.”

To that, we all shout, “Hurray for WGBH and for a community wise enough to support it!”

[The cover picture] really blew me away. When I received this picture from Al, I thought I recognized some of the faces. So I blew up the picture to read the caption. And I was amazed at what I found.

Dick Tucker, Don Kent, Jack Borden, Norman MacDonald, Jack Chase, Art Amadon and Arch MacDonald were all staff at WBZ when I first got interested in TV at age 14. I hung out there on weekends for a couple of years, doing anything they would let me do. And I knew them all.

I used to frequent the Rex Trailer show. Bob Emery gave me my first paying work in TV as an assistant on his kids’ show. And, here’s the capper — Dick Kilbride (Trailer’s Mexican sidekick in the center) was a close friend of mine dating way back to my theater beginnings in the Boston Tributary Theater (1948 — I was 11). Dick played Geppetto in Pinocchio — the very first play I was ever in.

[The inside story is] worth a read, remembering that those of you who worked at the station in those years prior to the fire are directly responsible for the accumulation of community good-will that resulted in such impressive outpourings of support.

The stuff of WGBH’s recovery didn’t spring from nowhere, and it was not something which would have taken place automatically, in any community, under any circumstances. The resurrection of WGBH materialized out of earned public loyalty, and this loyalty played an enormous part in providing the subsequent success of the enterprise with a sound foundation. That’s strong magic!