[We made] a fund-raising spot, done with a Cambridge taxi, in December 1960, in the days before auctions and pledge weeks. It was taped in front of 84 Massachusetts Avenue, facing MIT. 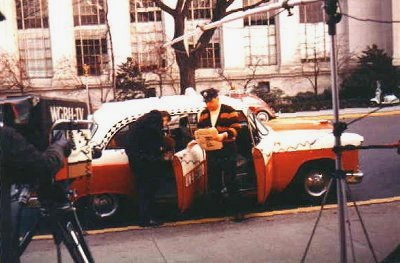 I know the…spot [was] part of a campaign we did after the first group with celebs a year earlier.

My favorite was shot in the studio with Cardinal Cushing. He couldn’t get the call letters right, and we did retake after retake. At one point, he said in exasperation, "…ah, can’t I just give you some money?"

Who knows more about this scene? Who were the actors, the techs, the director? Paul guesses perhaps they were Peter Winn, and/or Bill Cavness, and/or Bill Cosell. Were they any or all of these?

Allegations surfaced that Jack Barry (as I recall) and several other media notables may have been taking [payola] under the table. In the McCarthyesque atmosphere of the era, someone (the FCC?) decided that a thorough housecleaning and accounting of bribery in the broadcasting business was long overdue.

Literally everyone, industry wide, had to fill out forms declaring any and all, material and/or financial, "unofficial" payments they had received during the year from sponsors, record producers, anyone who might be attempting to buy influence. Payola was to be excised. In the media world that would, of course, be tantamount to trying to scourge the leaves from the trees. But on we went.

Well, we at WGBH, high-rollers of the broadcasting industry, were under the same extreme scrutiny as everyone else was. There were forms circulated to all from Hartford Gunn in the corner office on down to Peter Prodan in the scene shop, and we had to complete them and hand them in, revealing the riches we staffers were rolling in, garnered from all those movers and shakers in the society who desired favor with the fourth most powerful Educational Television in the country. There was lots listed on those pieces of paper, you can be sure.

In fact, at the outset of Makebelieve Clubhouse, someone offered me (as the program’s producer) a stuffed baby elephant — not me personally, you understand, but the show! Either I never pursued it, or the potential donor never came through. I can’t remember which. But I never reported the incident. I regret to this day not having acquired the elephant calf. Just think what Martha Stewart could do with something like that. And, God, it’s the kind of thing you can’t even find at Sharper Image any more.

The whole witch-hunt lasted only a year or, at the most, two. Then everything went back to business-as-usual in an industry for which, without "influence," there is nothing.