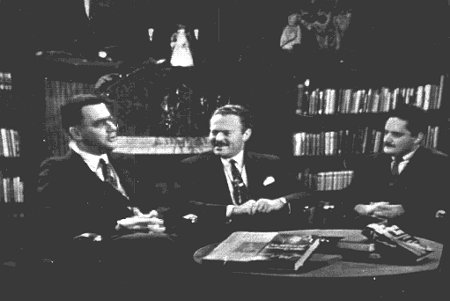 From Peter Hollander: A screen shot from the book show, I’ve Been Reading. In the middle is Arthur Knight, author of the book The Liveliest Art, a history of the movies, a friend of mine, now the director of the Movie Museum in L.A. On the right, wearing Arthur’s mustache is Peter.

Here’s a true story related to me by Bob Larsen about Norbert Wiener.

Norbert Wiener and Isaac Asimov were a frequent pair on programs as diverse as I’ve Been Reading and Science Reporter. Each would request the other to join him when being interviewed.

One day, Bob Larsen received a post card from Dr. Wiener to the effect that “Under no circumstances will I discuss my new novel on your I’ve Been Reading program!”

A week later, Bob opened a letter from Dr. Wiener to the same effect. “Please do not ask me to appear on I’ve Been Reading to talk about my new novel!”

A few weeks later, Bob had a telephone call from Dr. Wiener. “Mr. Larsen, I won’t come on your channel to mention my new novel.” Bob agreed not to invite him.

Then, a few days later, Norbert Wiener strode into Bob’s office uninvited, dropped his novel on Bob’s desk, and said “Read it!”

Bob began to read the book. He took at least a half-hour of time, while Dr. Wiener stared at him, to go through as much of the book as he could. Finally he looked up and said, “It’s very good.”

“Ah,” replied Wiener. “In that case, I’ll be delighted to go on I’ve Been Reading as long as Isaac Asimov can join me!”

Professor Norbert Wiener of MIT wrote at least nine books, all treating highly technical, mathematical and scientific/humanistic subjects. The “novel” on which this story centers was entitled “The Tempter.” It is the only work of fiction Dr. Wiener ever wrote. It has been long out of print, having proved to be something less than a classic. His ambivalent feelings at being “off his turf” reveal a very human side of the “father of cybernetics.”