Skip to content
Decades > 1950s
This entry is part 6 of 12 in the series The Don Hallock Collection
Reading Time: 5 minutes 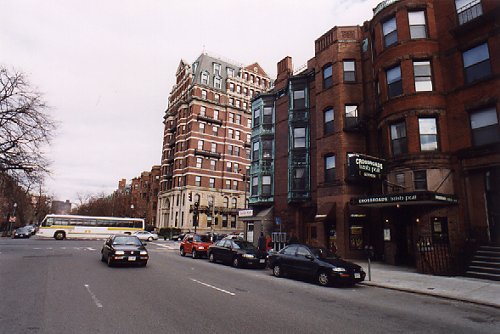 Just around the corner from the former Zebra Lounge, (the present-day Crossroads Tavern, shown in this photo to the right of center) was a pair of apartments at 27 1/2 Massachussetts Avenue, over a greasy spoon eating place which shared a kitchen with the Zebra.

The second floor was occupied by Bill Heitz, Stewart White and Don Mallinson, while Jean Brady (Moscone Jolly) lived in the flat just upstairs. The place demonstrated, according to Vic Washkevich, “how blankets can give you privacy in a thumbnail studio….and provide lasting memories.”

“27 1/2 Mass. Ave. was the place, right around the corner from the Zebra which I think our class found and then slowly took over. Bill, Don, and I shared a one bedroom small (very small) apt. on what I think was the 2nd floor. Jean lived alone on the 3rd floor in an apartment that was a little bigger than ours because it didn’t lose space for the stairwell.

There are probably several hundred stories that go with 27 1/2 and you should bug Don, Bill, and Jean for some of them. Like the Christmas we put a Christmas tree in Jean’s toilet while she was out shopping.

Like the post live opera (La Fintingera or something like that [La Finta Gardinera: ed.]) held in Jean’s apartment on a week night starting at about midnight. The entire opera cast was there, the ‘GBH production staff probably including you [Don Hallock], and some big name from New York who directed the entire three hour live show [David Pressman?]. At some late hour the cops arrived because the neighbors were complaining about the noise. We were merely drop kicking dozens of empty beer cans out Jean’s living room window into the alley below. Heitz hid in the closet/roof access area in Jean’s apartment hanging on a ladder while the rest of us (probably still 20-30 people, wandered the alley picking up all the cans under the watchful eye of Boston’s finest.

There was also a trip to some beach late at night when Moscone’s big old Olds got stuck in the sand. I’m sure there are more.” 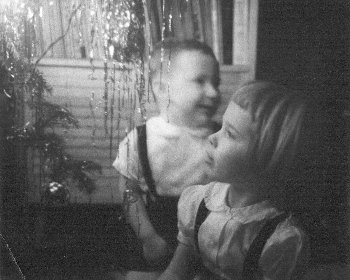 This photo is of Vic and Olga Washkevich’s kids Michael and Kathy. It was taken by Don Hallock at a Christmas party in 1957 in the Heitz-White-Mallinson digs mentioned above. Vic remembers that: “Carols by Odetta were on the record player.” 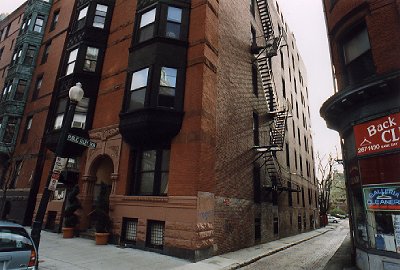 1958: Twenty-nine Massachusetts Avenue (Heitz, White Mallinson, Brady) stands to the right, and 31 to the left, of Public Alley 104, AKA “Rat Alley.” 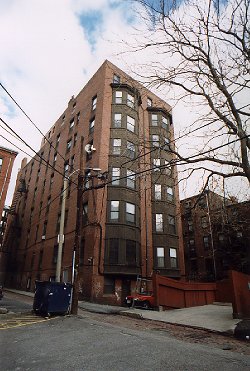 Behind the rear windows of the third floor of 31 Mass. (as seen here from the alley), Brooks Leffler, Paul Noble, Dave Nohling and Larry White maintained their domicile.

The place came with all the amenities. As I (Don) recall, there was no TV set, but that lack was more than offset by a clear view into the rear windows of the BU women’s dorms, about 50 yards away at the other end of the alley. 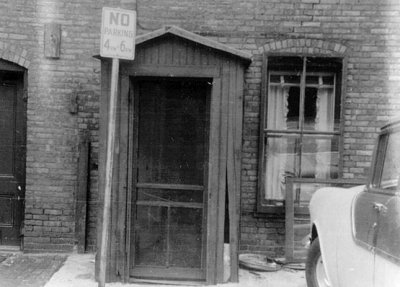 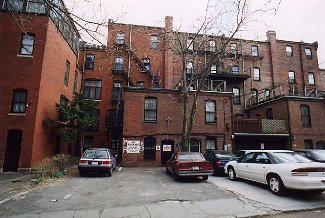 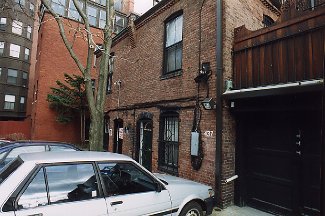 “Rat Alley” was named in recognition of (you guessed it) the multitude of extremely territorial rodents, which were measured not in inches, but in feet or meters.

Fred Barzyk and Tom McGrath holed up in the tiny hovel comprising the right half of the little structure shown at the center of the above photographs. In the right-hand picture, it will be observed that, quite remarkably, the place bears an address: “437” (Rat Alley?).

The window visible to the right of the little door is one of two — the other being behind the wooden fence. Taken together they offer a view of precisely nothing.

This modern-day version of the “Lower Depths” seems still to be inhabited. In those days, the interior color scheme was an inspiring example of way-off-white dingy. Let’s hope the landlords haven’t waited yet another twenty years to repaint the place.

Despite the rather oppressive “modesty” of the premises, many many parties and wild rumpuses were held here (a testimonial not to the hospitable atmosphere, but rather to the eccentric personae of its occupants). 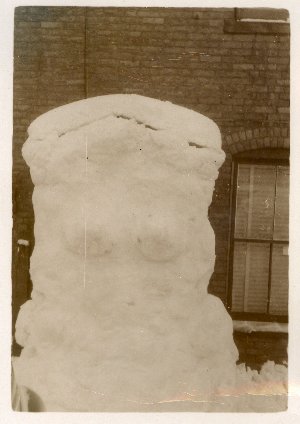 This sculpture, fondly entitled “Sno-Boobs,” was an early Barzyk-McGrath production, and stood for one shining moment directly in front of their door. (It will be noted that, in those kinder, gentler days, bars over the windows were not considered necessary.) (From the WGBH Archives) 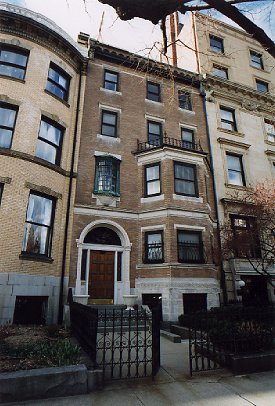 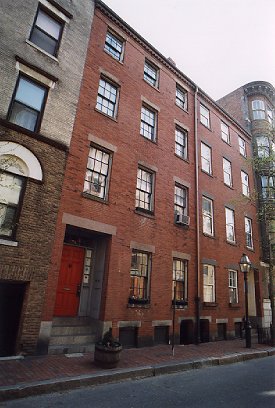 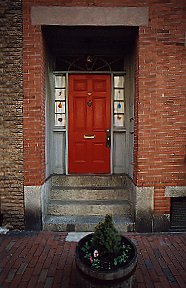 In 1962 and 1963, the first floor of 52 Revere Street on Beacon Hill was the home of Don Hallock and Kay Mote (who had been for several years Bob Larsen’s secretary, and was succeeded in that post by, I believe, Emily Lovering).

It looks today almost exactly as it did then. The front room (distinguished from the bedroom by virtue of a tiny kitchenette) served as a painting studio for Don. The tiny bathroom was a darkroom for Kay.

The list of WGBH “staff crashers” was lengthy, including, on occasion, Frank Vento, Bob Giuliana, Paul Neff, and Mark Tucker. Upon Don and Kay’s departure for New York, the premises were taken over by Steve Gilford.