Here’s a collection of images rediscovered by Steve Gilford in May, 2002. The captions are largely in his own words. Photos credited, where available.

As for the Conference Room, when we moved into 125 Western, I was so struck by the size of the conference room table, I took a picture. Don Hallock: The old conference room at 84 Mass. was smaller than this table. 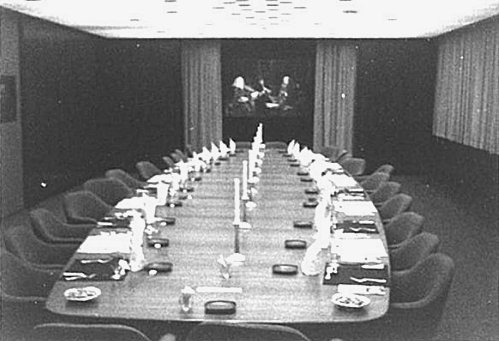 Emily Lovering, everyone knows! Bob Larsen was [Program Manager, and then General] Manager until his untimely death in the late 60s. The man in the doorway is named Smith I believe, a producer but I don’t remember his first name. I do remember that he was always impeccably dressed. Don Hallock: As, of course, were all WGBH employees! 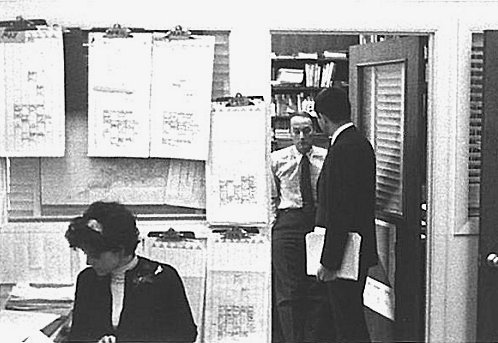 Hamilton Osgood (seated at left) was WGBH’s own dollar-a-year man. Formerly with the Raleigh Bicycle Corporation, he ran the Auction from its founding for many years with a genteel, poised quality. Don Hallock: The lady is unidentified, and Dick Thomas is at the right. 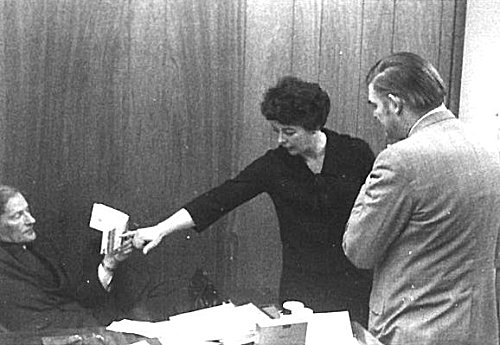 Dick Thomas was Program Manager for a while I think. 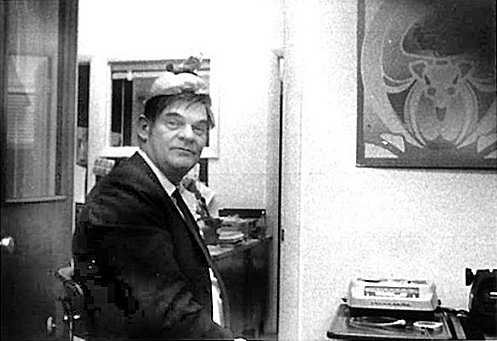 Don Hallock: Unfortunately, Steve doesn’t know who this is. Do you? 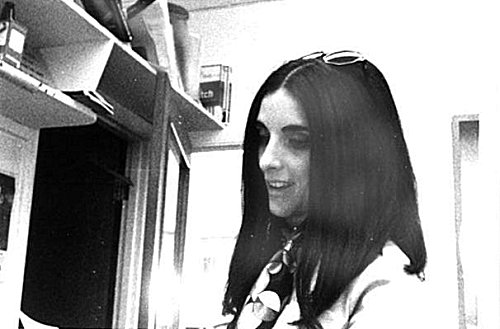 Helen Peters was the director of Public Relations in the late 1960s and early ’70s. Her office was one of the most high-spirited in the organization. 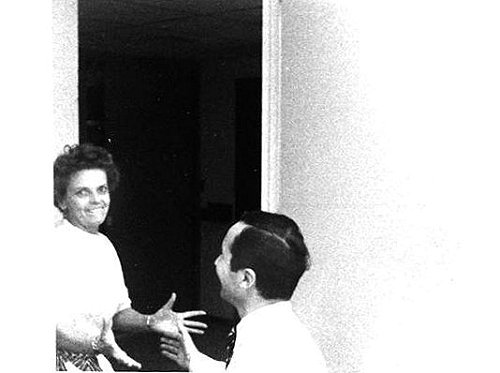 The picture with Dick Oldham (right) has two people in it who I cannot identify.

Dick was an assistant chief engineer who was one of the pioneers in the concept of teleconferencing. He helped to design one of the first medical teleconferencing systems in the world. A cooperative venture between WGBH, Mass General and Logan Airport, it was featured in TV Guide. 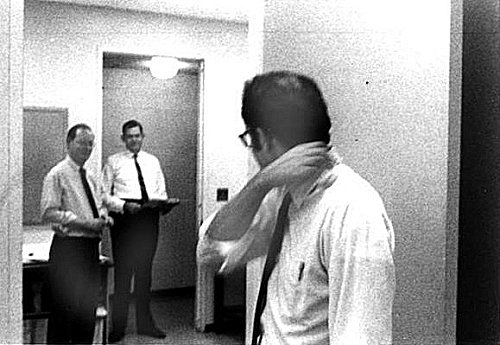 Marie Foskett was a volunteer in the ‘Law Enforcement and Criminal Justice’ series I produced for the US Dept. of Justice. She took care of the bicycling of kinescopes among the hundreds of local police departments that subscribed to the series. She was a regular and there as a volunteer for several years. 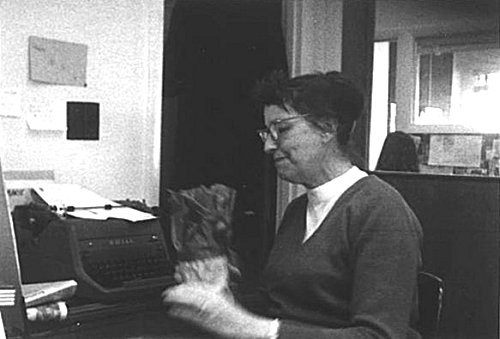 Outside FM offices’ was taken outside of Michael Rice’s office on the ground floor of 125 Western. The woman in foreground was named “Hadley” but I have no idea who the man is.

Don Hallock: I think the man may be Bill Busiek, the nearly legendary audio engineer who did the Boston Symphony broadcasts for many years. 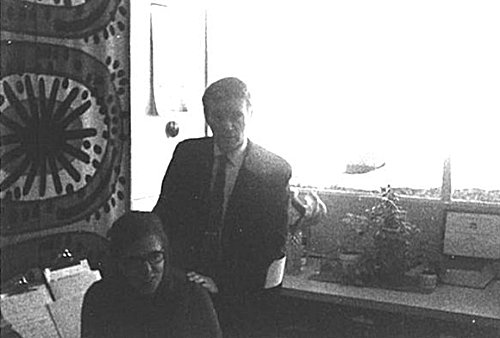 The Don Fouser pic shows a lovely lady in the background whose name I cannot recall. She was an Associate Producer and then a producer. Her husband was killed in an automobile accident more than twenty years ago He was a ‘GBH producer but I can’t remember either of their of their names. She had a daughter who must be quite a young woman by now. As I recall, she was at the (2000) reunion. 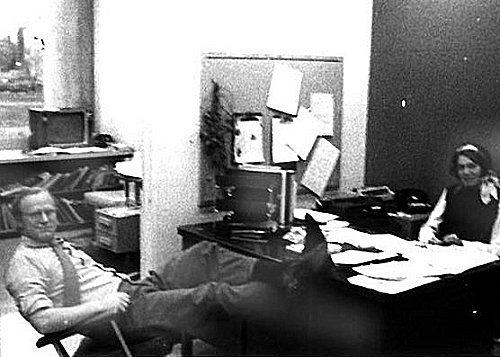 Don Hallock: Steve and I both feel this is probably Mike Ambrosino, bathed in light, the way I always imagine him. 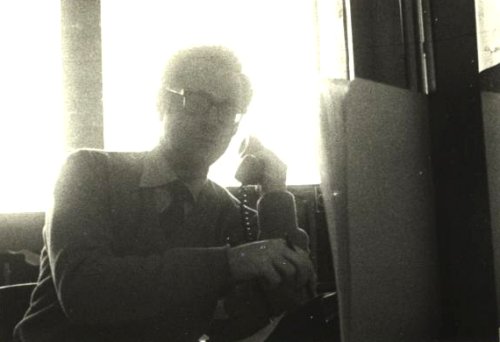 Looking at the picture of Peggy [McLeod] reminded me of how much I enjoyed knowing her during my WGBH years. 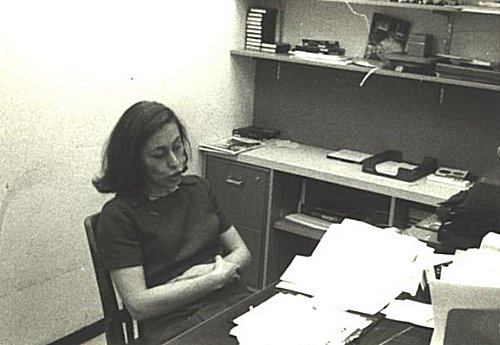 [This] picture is taken from the scene dock looking up towards what was the Art Department. The life ring was a humorous touch someone had added and looking down from that railing did give the feeling of being on board a ship. Jay Collier: That space later held offices for The Ten O’Clock News. 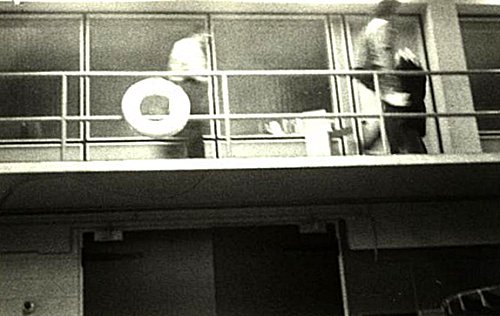 In the mid-Sixties, WGBH (I think Freddie Barzyk) produced a series called Folk Music USA. The host was Dusty Rhodes and the guests were often quite good. It may not have been Circle of Light, but for a no budget local show, it was often quite good with high quality music even if the guests were not big names. It was a good series.

This photo was taken on a Folk Music USA remote at The Unicorn on Boylston Street, a basement folk music club, the biggest name one in Boston at the time. The club, owned by George Papadopolos, became a hangout for me due to the friendships I made stage managing this production. 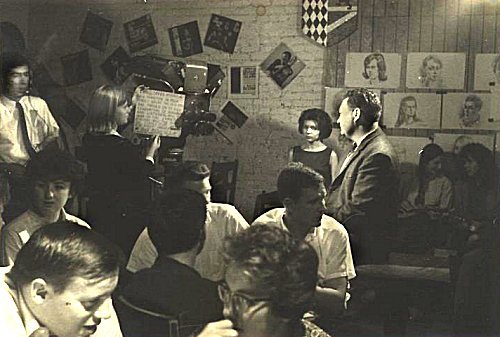 “[This picture, ‘Proposition’, is] from a Children’s’ series I produced called, How Can I Tell You. It was made up of a variety of different formats.

The two people in the center of ‘Proposition’ are Josh Mostel, son of Zero, and a comic actor in his own right, and Judy Kahn (I think that is her name. She, too, is a familiar comic actress who shows up in character roles fairly frequently.)

They were part of an improvisational comedy troupe called ‘The Proposition’ headquartered in Cambridge, and were brought on to do a couple of shows in this series. I was show producer as I recall and a producer named Lois was the series producer.

It is typical of the culture of WGBH of that time that the study guide gives all sorts of credits for things tangential to the production of the program but there are no personnel credits. (Photo by Bliss Bruen.)

Jane Curtin — of the original “Not Ready For Prime Time Players” cast of “Saturday Night Live” (as well as CBS’ “Kate & Allie” and NBC’s “3rd Rock From The Sun”) — was a member of that improvisational troupe. It is possible that she was even on one or more of that program’s episodes.

I saw Curtin with The Proposition on a field trip of my high school drama club back in the ’70’s — 1973, I believe. Just two years later she was nationally famous, eventually co-anchoring the program’s “Weekend Update” with Dan Ackroyd and playing the wife/mother in “The Coneheads” skits.

Amazing that Curtin started her career right here in Boston!

Four folks from the Proposition appeared. One was Josh Mostell (son of Zero), and the director and two unidentified women, but neither was Jane Curtin.

The Proposition appeared on Club 44 and had a young man by the name of Fred Granby who went on to star in Love Boat and then became a congressman I believe from Colorado.

Jane Curtin starred in an HBO Special I directed in the WGBH studio. Peter Frame, who had been on the WGBH crew several years earlier, was then head of programming for an upstart cable system called HBO. Because Boston had not yet got cable, Peter came up with the idea that WGBH would provide the studios and crews and HBO would pay for the talent. HBO would air on their system and WGBH had the Boston market.

The first show was the Bob and Ray Broadway show, The “one and only”. This was a success and HBO approached us to do “Pretzels” and off Broadway musical starring Jane. Same deal, they aired on their system and we got Boston. Soon after these two specials HBO and Boston came to an agreement on which cable system and the deal ceased. So the story of Jane and WGBH. 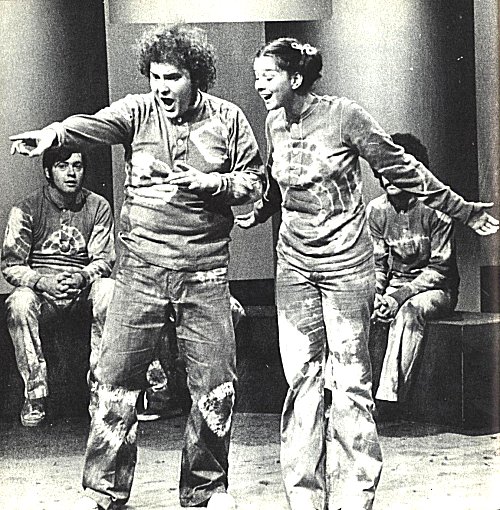 Bonaparte was the story of a funny looking Citroen that got tired of living in the city, moved to the country to get away from the crowds, pollution, etc. and lived happily in the pastures of Lincoln at Drumlin Farm.

Then it noticed that it was messing up the fields with its tire tracks and filling the air with exhaust fumes. The climax was when Bonaparte, the car, returned to Cambridge and took up residence in Brattle Square across from the Evergreen Market as a giant flower vase, making the city prettier. (Photo by Bliss Bruen.) 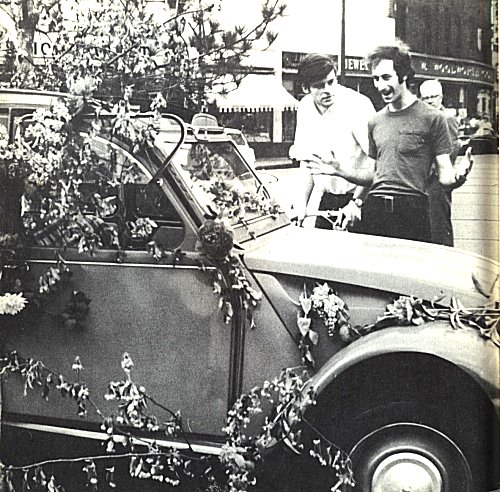 The Law Enforcement series was pretty high profile for an educational program. It was featured in an Arri ad that ran in the American Cinematographer — the only time my name ever appeared in that publication.

Peter Hoving is the cameraman and Wil Morton is recording sound. The series ran 1968-1969. 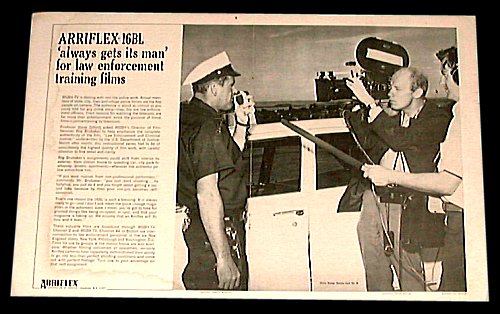