It must have been in 1957 that we did a science series hosted by Mary Lela Grimes.

It was in the wonderful days of live TV and Mary Leila had gotten the world’s leading expert on the behavior of bats to appear on her show. He was either from Harvard or MIT but from the moment he walked in the studio with his cages of live bats his wild-eyed demeanor should have alerted us. 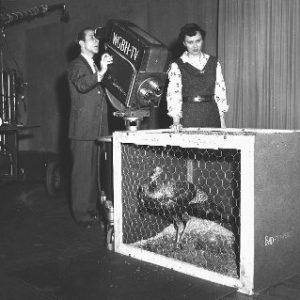 He set up a window with two dangling sticks just slightly wider than the wings of his bats. If anything hit either stick a bell would go off. He showed us that he could release a bat through that window and blind as they were they would never hit either of those two sticks.

He did it, one at a time, with two or three bats but then the fire lit up in his eyes. “Isn’t that wonderful?” he said, “Let’s try another one!” And another one. And the studio was soon full of swarming bats.

There was no stopping him but soon the time came for the slide projector to show the three slides that indicated to viewers of WGBH-TV that one show was over. Meanwhile the camera crew wheeled the two cameras around to the opposite corner of our only studio where Louis Lyons was ready to do his daily news report.

What the viewers didn’t see was the whole free crew and anyone available in the vicinity racing around the studio with brooms and makeshift bat catching apparatus. But then the inevitable happened — a bat flew right in front of Louis… on camera!

Lyons looked up, puzzled, but didn’t miss a beat of the news item he was reading.