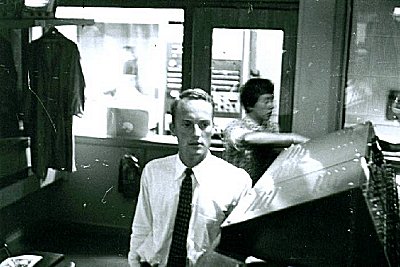 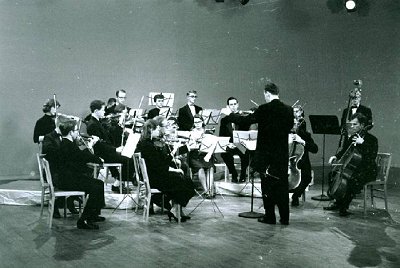 
The photo of the chamber orchestra … is of the first televised concert of Harvard’s Bach Society Orchestra, conducted by me. For all I know, this may have been the first orchestral concert televised on WGBH, in the studio on Mass Ave across from MIT. The orchestra also appeared sometime in the spring of 1956. Both of these appearances were arranged by Jordan Whitelaw, with whom I would lunch occasionally at the Signet Society at Harvard.

This is of particular interest this year [2004] since the Bach Society Orchestra is celebrating its 50th anniversary in the upcoming season. I founded the orchestra in the fall of 1954.

I was very glad to come across this photo, quite by accident during a search for information about William Pierce. 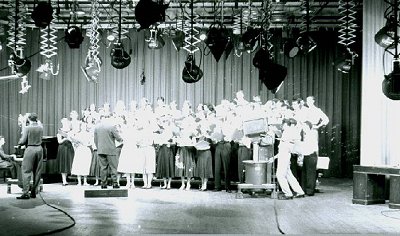 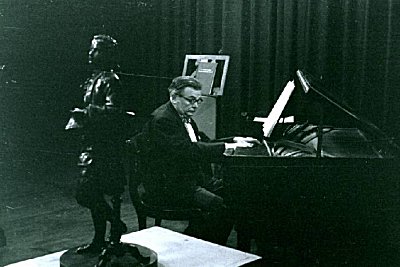 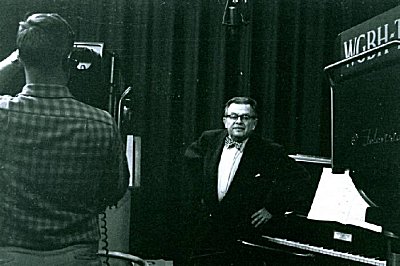 In the Bill Pierce picture, you might be able to make out that the desk microphone is being supported by a stand unlike any you had ever seen before. The story? 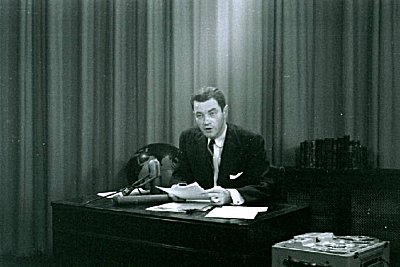 In 1955, most good mikes were still those designed for radio in pre-transistor days: bulky and heavy. The stands that came with the mike in the picture were straight up-and-down. We wanted to get the mike a bit closer to the face of the person speaking without having it dominate the scene.

We were unable to find a cantilever stand that was large enough or heavy enough to support the mike. So, vaguely remembering something about a law of physics involving the center of gravity, I designed a base for the stand, which was fabricated in the shop — if not by Rocky, then by Peter Prodan, or possibly Ray Wilding-White.

It consisted of what I suspect was nothing more than three pieces of pine — possibly 2″ X 2″ — with two rounded-off edges on the top surface, assembled into a V shape, with appropriate hardware screwed into the bottom of the V to hold the mike. The wood was then stained to approximate the color of the desk.

The engineering staff, as I recall, scoffed at the idea — John LaBounty and Roger Rice with some derision; Bill Busiek, more gently. They were convinced that the whole rig would tip over. Came the moment of launch and, voilà, it worked!

Rocky — bless you for digging this up. I confess that I had completely forgotten what might have been my most significant contribution to WGBH-TV’s operation during those rickety first two years. 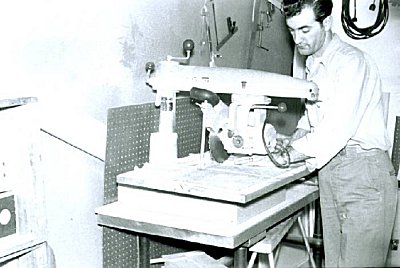 The original scene shop was an office space measuring approximately 10′ x 20′ next to the record library. When it came time to rip boards any longer than 8′ on the saw pictured here, we had to open the record library door and feed the wood into the saw from out there. 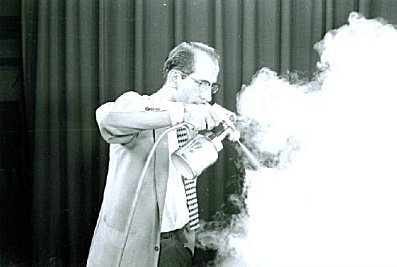 Airing live TV in Studio A starting with Louis Lyons at 6 pm until sign-off at 11 pm from the summer of ’57 until the summer of ’58 also meant that each of us ten neophyte scholars had to have a lot of faith in one another’s abilities and commitment.

We came from different places, had never met one another, barely knew each other’s first names for a while and suddenly we were the arms and legs of the station, mastering the mysteries of being a switcher, boom man, camera operator, floor manager and lots more all on the same night. Although it was a labor of love, the fulfillment of that trust engendered a camaraderie among us that continues to this day for our class. We’ve had three class reunions since ’58 and we want to thank WGBH for throwing the party for us in April [2000].

Think about it. A bunch of kids walked in the studio and had all the toys in the world to play with, under direction, of course, while actually being on the air. Where else in the world could this happen? If you made a mistake, you didn’t get fired, you got better. And, mistakes were expected, given who we were. In fact, the lifers like Ambrosino, et al. made a lot of mistakes. But that was part of the greatness of being there, at least back in ’58.

Isn’t that wonderful — having air time, a studio, equipment, such as it was, and being able to learn while doing. It was exhilarating. Hell, for all we knew, every studio everywhere had ruts int he floor. For kids just out of college, this is what a TV studio looked like. We had nothing to compare Studio A to, so we made it as good as it could be and it made us as good as we could be.

In the summer of ’58 when we did the Boston Arts Festival, I was the stage manager for the ballet segment. Andre Eglevsky was the featured dancer. As you may recall, the wings of that stage were very narrow. I was crouched in a tiny corner with my headset on talking to the back of the station wagon (control room). Andre, sweating and with his feet propped against the wall behind him ready to leap upon the stage, looked at me and said, “Tell them I am ready.”

Somehow, we all were. This experience will never happen again in anyone’s lifetime. It is to be cherished. As you noted many people share that feeling. Oh, and the class of ’58 has decided that we’re going to sing our anthem at the event. Tell Barzyk. That’ll give him something else to worry about. And we want prime time.