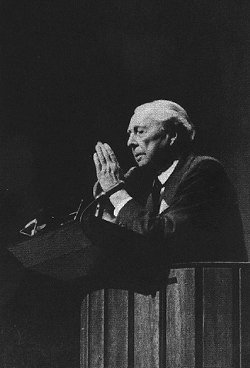 In about 1960, world famous (and infamously irascible) architect, Frank Lloyd Wright, gave one of his rare lectures at MIT’s Kresge Auditorium. The proceedings were televised live by WGBH and fed down the line to a national audience on NET as well.

Recently completed, the Kresge building, which had been designed by renowned Finnish architect, Eero Sarrinen, stood on a broad grassy field just behind the Channel 2 studio building. Inside, was a large, airy facility, ‘Scandanavian modern,’ with a warmly comfortable interior of natural woods, and all housed beneath the span of a graceful, low concrete dome.

From the outside, the viewer was immediately struck by the realization that the great dome itself was balanced elegantly on three small, symmetrically spaced corner points. The soaring, open sides were solid glass, and the edifice was, to say the least, MIT’s pride and joy.

Having finished the body of his talk, Mr. Wright agreed to entertain questions from the packed audience. About half way through the exchange an eager young student rose and asked, "Mr.Wright, what do you think of Mr. Sarrinen’s beautiful auditorium."

Wright, without a moment’s pause, fixed the student with a penetrating stare, and replied …