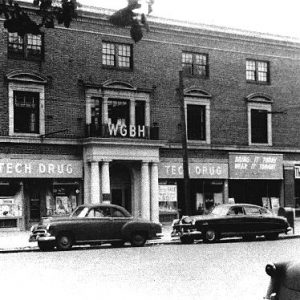 Though this story isn’t strictly about television, it was making the rounds of MIT during the late ’50s, and found its way into the studio at 84 Mass. Ave. where I heard it.

Our little tale concerns the devastatingly brilliant, and notoriously vague, Professor Norbert Wiener. Author of the landmark volume “Cybernetics: or, Control and Communication in the Animal and the Machine,” he was known as the “father of cybernetics.”

Dr. Wiener had, I believe, appeared on MIT Science Reporter at least once, when computing (such as it was in those days) was being discussed. His appearance was much what you might expect of the creator of computer theory. A decidedly portly, middle sized man whose clothes fit like a tent, the professor was chronically disheveled, his round face framed with wild gray hair. And he peered out at an apparently strange world through round glasses with lenses about one-half inch thick.

Dr. Wiener could often be seen chewing on a candy bar and navigating the sidewalk just outside the WGBH building, frequenting, as he did, the Tech Pharmacy on the first floor.

One mid-day, the good professor was making his way along Mass. Ave., approaching Storrow Drive and the Charles River Bridge. He paused and turned when he heard one of his students call out loudly from behind him, “Professor Wiener….Oh, Professor Wiener.”

“Yes, young man?” Wiener replied as the breathless student caught up with him.

“Professor Wiener,” the student gasped, “Could you please tell me what grade I got on the exam you gave on Monday?”

Wiener squinted, perplexed, and said, “I don’t keep track of such things, young man. You’ll have to go to my office and inquire with my secretary. She keeps records of all the test scores.”

The student headed toward MIT, and Dr. Wiener continued on his way. A moment later, however, the student stopped and turned when he heard from behind him, “Young man, young man!”

The student hastily returned to Dr. Wiener, and was asked, “Young man….when you stopped me, in what direction was I walking?”

Nonplused, the student replied, “That way, professor” (pointing away from WGBH and the Tech Pharmacy).

“Oh,” Wiener mused to himself as he resumed his walk. “Then I’ve had lunch.”

Who was the MIT professor who used to teach a Shakespeare course in the ’round’ in Studio A at 84 Mass Ave?

So I slowed my trucking of the camera while Al Hinderstein raced to the prop room, fetched the skull, and did this third-base slide with it … Just as we revealed it on-camera …

Remember Professor Edwin G. Boring who used to do a local program on psychology using only a swivel chair and a wall-mounted chart, who was also miked with one of those old cabled lavaliers, who had turned from camera to chart so many times during one show that he wrapped the mic cord round and round the chair pedestal, and who, when he tried to rise (in full ‘lecture’ mode) to refer to something higher up, nearly strangled himself to death … live!