At the age of 81 Dave passed away on May 23, 2007, in the kitchen of his home in Guyana. He and his wife Joyce had been retired and playing Jazz around the islands since 1993. 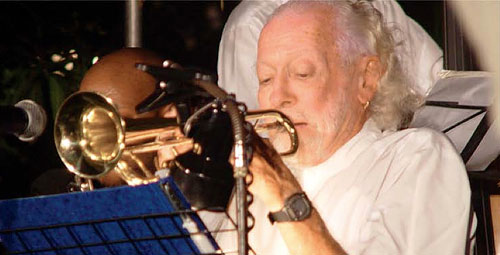 Sad news from the Caribbean: Former WGBH Station Manager David MacFarland Davis passed away 5/23 in his home in Guyana at 81. Dave and his wife Joyce had been retired and playing jazz around the islands since 1993.

During Dave’s tenure at ‘GBH (1956-67), he produced and directed several TV productions, including Robert Frost: A Lover’s Quarrel with the World (theatrical release of which earned the film an Oscar in 1963), Aaron Copland: Music of the ’20s, and Lotte Lenya: World of Kurt Weill.

Dave’s first wife, Sylvia, headed up Creative Services and Communications in the ’70s and their son, Scott, was part of the technical crew (and later, headed up production for the MTV network).

Dave went on to become director of Programming Instruction at the Television Trust in Tel Aviv, Israel. In the late ’60s, he returned to the US to work for the Ford Foundation’s Office of Public Broadcasting (where VP Margaret Drain was on his staff), moving on to become president of Public Television Playhouse, Inc. and president and CEO of The American Documentary Inc., which launched, respectively, American Playhouse and P.O.V. (both the result of production consortia involving WGBH).

Tributes to Dave, including a 1958 memo to WGBH TV staff on creativity, are being posted on the WGBH alumni site.

“Dave was one of the people who built and shaped the public TV system as we know it,” says WGBH President Henry Becton. “He was a trusted manager with multiple talents, who in the last phase of his life followed his own creative muse as a jazz musician.”

I first met Joyce and David on Hog Island, Grenada. They were on their yacht Mood Indigo and they had organised the Yachtie Jazz Band. I and 100 other yachties drove off in our dinghies into the dark windy night to hear some live music. What a treat! Cruisers sang, cruisers played musical instruments and of course David played his trumpet and Joyce sang her blues.

That was 1995, 14 years ago. I have known Joyce and David as musical cruisers and great organisers.

But when Army and I sailed to Guyana last September on our yacht Passe Partou, Joyce and David were now homeowners. We had spent many a dinner on their front porch listening to frogs and watching the moon to rise.

Here I asked David to describe his greatest achievement. He told how he pioneered “Public Television” in the USA and how this fledgling Public TV got contributions to produce very high quality cultural and educational programs; one such program was Sesame Street.

Then he watched Public TV expand from New York City to Boston, then ever so slowly to another city and then another city until it finally crossed the USA. Public TV became established.

Kit Nascimento of Guyana, who knew David during his professional broadcasting days, said that David was very highly regarded in broadcasting and an icon in Public TV Broadcasting. Even Google on the Internet describe the number of linear feet of paper David wrote during his career at the Ford Foundation.

Only in his death have I learned so much about David Davis. He was truly a man of many facets: An icon in television broadcasting; a horn playing musician and a lover of Jazz; a cruiser on his sailboat Mood Indigo; and a man happy in his home on the Essquibo River in Guyana.

I am pleased to have known such a special soul and am sorry to say goodbye but I know his spirit will always be nearby.