Skip to content
Stories > In the Press
Reading Time: 2 minutes 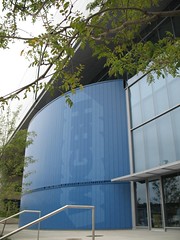 A bridge to the future in Brighton

At 6:30 tomorrow morning, a huge electronic screen will light up over the Massachusetts Turnpike as the road bends toward Brighton. Photographs of dancers, leaping into the air, will tower over the highway. Article Tools

It will be the premiere display of WGBH’s digital mural, the most striking feature of the public broadcaster’s $85 million new headquarters.

The new WGBH headquarters is like an improbable marriage. A handsome success is wedded to a dowdy loser.

The good-looking spouse is a spectacular piece of architecture. Designed by the Polshek Partnership, of New York, it features a bridge that soars across Guest Street at the corner of Market in Brighton. The bridge then thrusts out above the Mass. Pike, where it ends in a 30-foot-tall illuminated LED mural. 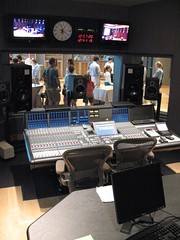 The public will get its first sustained look at the powered-up array of light-emitting diodes today, as the station holds its formal ribbon-cutting ceremony.