G. Franco Romagnoli, who, with his wife, Margaret, helped introduce Americans to authentic Italian home cooking on the 1970s PBS series “The Romagnolis’ Table” and in a series of best-selling cookbooks, died Monday in Boston. He was 82 and lived in Watertown, Mass.

His son Marco confirmed the death but did not give a specific cause.

At a time when many Americans believed that spaghetti with meatballs was an Italian dish, Mr. Romagnoli, a Roman by birth and upbringing, translated the basics of Italian cooking on a low-key show that emphasized simple dishes made with restraint.

He did his best to shatter old myths, like the idea that pasta required a tomato sauce bubbling on the stove for hours on end. “That’s as un-Italian as you can get,” he protested in an interview with The Christian Science Monitor. “Ninety percent of pasta sauces are made by the time you bring that pasta to a boil.” 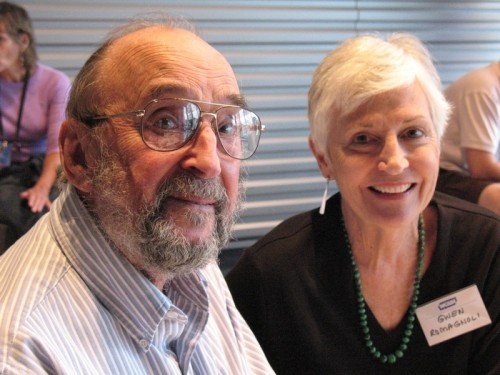 Franco and Gwen Romahnoli at the 2007 studio tour

Gian Franco Romagnoli was working as a cameraman and director in a Roman film studio during the postwar years when he met Margaret O’Neill, an American information officer for the Marshall Plan. Her filmmaking assignments had made her his supervisor. The working relationship turned romantic, and the two married in 1952, in defiance of American government rules, costing the bride her job.In 1955 the couple left for the United States, and Mr. Romagnoli found work as a cameraman at WGBH, Boston’s public television station. He went on to establish a freelance career as a cinematographer, working on documentaries and television commercials.

Mr. Romagnoli and his wife, who died in 1995, also opened a restaurant, the Romagnolis’ Table, in Faneuil Hall in Boston in 1979. It closed in 1989. Two sister restaurants, in Salem and Burlington, Mass., were not as successful.

In 2002 Mr. Romagnoli published “A Thousand Bells at Noon,” a well-received travel memoir about Rome. With his second wife, the former Gwen O’Sullivan, whom he married in 1998, he wrote a culinary travel book, “Italy, the Romagnoli Way” (Lyons Press, 2008). He had just completed “The Bicycle Runner: A Memoir of Love, Loyalty and the Italian Resistance,” to be published next August by Thomas Dunne Books/St. Martin’s Press.

In addition to his wife and his son Marco, of Corinth, Vt., Mr. Romagnoli is survived by his three other children from his first marriage: Gian Giacomo of Neshkoro, Wis.; Paolo, of Watertown, Mass.; and Anna O’Neill Romagnoli of Astoria, Queens; and four grandchildren.