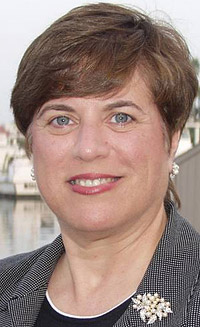 Deepest condolences to the family, friends, and colleagues of former ’GBHer Jeanne Brodeur, who passed away Mon, 10/19 in California, where she served as VP for Development at the Aquarium of the Pacific.

Jeanne started at WGBH in the 1970s right out of college, and worked in the Development department until 1980. She was an enthusiastic fundraiser who helped pioneer the idea of giving premiums to donors – including WGBH golf umbrellas in the mid ’70s that dotted the Boston metro area for years to come.

No flowers, please, but those wishing to make a contribution in Jeanne’s honor may do so to Emerson College, Jeanne Brodeur Scholarship, 120 Boylston Street, Boston, MA 02116-4624.

A good friend and colleague is gone, but we are very fortunate to have known her – learned from her, and laughed with her…a LOT.

Jeanne’s GBH tenure was in the 70’s thru 1980 in the Development Department. Jeanne was VP Development for the Aquarium of the Pacific in Long Beach, CA.

Jeanne with John Kerr, Amy Meyers, myself, Marilyn Bernardo, Helen Fox, Jo Madden, and others learned our fund raising skill through trial and error. We shared our successes with stations around the country — a leadership trend in fund raising that WGBH continues today.

Those were fun times when we were learning our fund raising craft. I remember when Jeanne had an umbrella salesman come to the station (1974-75?). She was positive that if we offered a big golf umbrella for a contribution, viewers would contribute. As was the usually the case, Jeanne was spot on. WGBH golf umbrellas could be seen all over the Boston metro area while stations around the country adopted this success. And then came the tote bags…..

There are so many stories of those early days when Jeanne or John brought an idea home from a meeting and asked Amy, Me, Marilyn, and Helen Fox if it could be done. Jeanne’s ‘can do’ attitude was most infectious as most of you know. Together we built a solid fund raising program on the foundation Jeanne helped pour at ‘GBH and throughout the PBS system.

Jeanne and Amy were two of my early mentors. Jeanne and I shared lots of laughs, as Mike Greenwald will well remember. The world is a bit less brighter this morning.

I received the sad news from all of you simultaneously as I opened my laptop on this rainy afternoon. I’m parked along a narrow roadway way up in the remote northeast corner of Yellowstone National Park, where I’m winding up my fifth post-’GBH retirement year as a ranger and living my dream. It’s raining hard.

And there, right there above the sage against Specimen Butte, is an enormous, multi-color, complete rainbow.

I wouldn’t be a bit surprised if Jeanne put it there. That would be like her.

Most of those in public broadcasting — and especially at WGBH — stand on Jeanne’s shoulders. She was the bedrock, the doer, the grit, the inspiration, the energy, the smile, the never-say-no person who made a lot of it happen.

Travel well, Jeanne, and thank you for everything.

I’m pretty sure that you’re already at work reorganizing Heaven and putting together a Development Plan.

Jeanne and I first met at WGBH/Channel 2, public television (and WGBH/FM public radio) in Boston. John Kerr was our boss. This was Jeanne’s first job out of college. When President Nixon vetoed the federal funding bill to support public broadcasting in the winter of 1973, public television stations went on the air to solicit support from viewers. While some stations had already dabbled in on-air fundraising, this was really the start of all those pledge drives with which we’re now all too familiar.

Jeanne’s training at Emerson and innate confidence immediately made her a role model and mentor for all who were suddenly thrust in front of the camera to encourage viewers to pay for something they could get for free. I remember marveling at her ease when she’d return from a conference and tell me that during a visit to the public TV station where the conference was being held, she immediately went on air and started “pitching.” There she was, already leading and teaching.

From the The Pacific Shores Hematology-Oncology Foundation 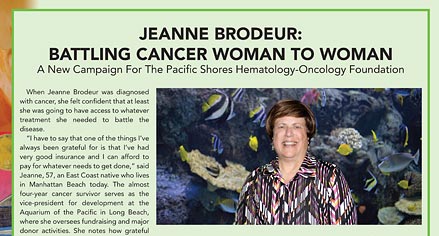 “The Woman to Woman Campaign provides deserving and financially needy women undergoing cancer treatment with access to tests, procedures, investigational drugs, and other life-saving medical expenses that can extend their lives and increase their quality of life.”