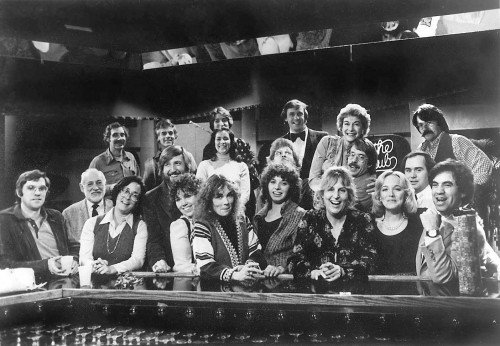 Studio A was converted into a bar/club where each Friday night we would tape four, half-hour, back to back, “live” 30 minute segments. These featured local bands and musical acts, cooking segments, political editorials from Barney Frank, interviews with local celebs, and a variety of Boston based info segments. It was made more interesting by the audience who was served wine and beer. They roamed about standing, sometimes tripping on camera cables and generally being helpful. As the night wore on the fun increased.

Silvia Davis was the Executive Producer. She and her team did a great job coming up with fresh talent and ideas for the show. I recall Dick Cavett doing a guest host spot, as did Garrett Morris from SNL. We did segments on CB radio (all the rage at the time) and hot tubs (one night we had a 6′ wooden barrel that mostly didn’t leak all over.) There were movie, book and eatery reviews and even the odd pet segment.

Some might remember the unique innovation called “the stick”.  This was used to ID guests. During a segment, David Atwood who was the ringmaster and chief would call out, “Okay, give ’em the stick.” At which point a piece of foam core attached to a dowel would be thrust into the frame…usually in a mostly lower third position. The guest’s name was painted on the sign.  This all happened in the days before Chyron.  You will hardly ever see it done today.

I’m sure others have fond “Club” memories… Care to share?