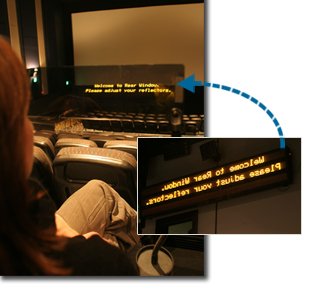 “It calls for … MoPix, which is comprised of a screen reader called Rear Window Captioning, and a descriptive-video service — initially developed by the Public Broadcasting Service’s Boston affiliate WGBH 20 years ago — to be installed in an additional 63 auditoriums….

“WGBH staffers in Brighton and in Burbank, Calif., caption [on average] 110 movies for the deaf and hearing-impaired annually and narrate 70 films a year for blind moviegoers.

“‘Our goal at WGBH is to have every movie accessible to everyone at all times,’ said Mary Watkins, director of communications and outreach at the Media Access Group in Brighton. The group’s 29 employees don’t just work on the MoPix technology for theatrical films, but also adapt PBS programs such as ‘Masterpiece Theatre’’ for the visually impaired, as well as newscasts for WCVB-TV (Channel 5).

“WGBH has 23 employees in Burbank so they can more closely work with commercial TV networks to create closed captioning for popular shows such as CBS’s ‘NCIS’ and Fox’s ‘The Simpsons.’ They also collaborate with movie companies to produce narrative descriptions for their new releases, such as the upcoming November DVD release of ‘Toy Story 3.'”