In 1980, shortly after departing WGBH to seek fame (and possibly fortune) as an independent producer, I approached Joan Wilson with a proposal to issue a record album of “Favorite Themes from Masterpiece Theatre.” Joan went for the idea immediately and asked Henry Becton and Sam Tyler for their endorsements. We got a budget and were ready to rock.

Alice Kossoff was our legal beagle at WGBH, and she was great! At the outset, the hardest part of the whole project was negotiating and collecting the executed contracts back from Britain. These were the days of the FAX and/or teletype, but no e-mail, and unless I phoned or until I actually presented myself in person at their door, the Brits seemed content to just ‘muddle along’ until the eleventh hour. One had to wait for weeks for confirmation from mysterious and slow-moving institutions like Clarabella Music, Limited and The Mechanical Copyright Protection Society. 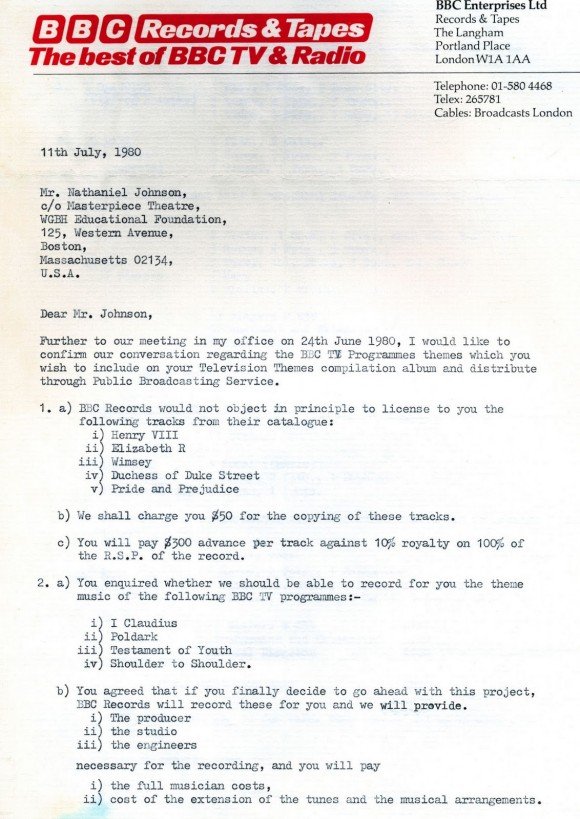 Most of the music rights were held by the BBC, London Weekend, EMI, Thames TV, British Decca, and Pushbike Music in London. The copyright to the main theme, “Rondeau” by J.J. Mouret, was held by an obscure and hard-to-locate company, Vogue Music, somewhere in France.

Since two of the selctions were not quite long enough for a record album, I commissioned Kenyon Emrys-Roberts and Wilfred Josephs, the composers of “Poldark” and “I, Claudius,” respectively, to extend their music specifically for the LP. Both were happy to do so and luckily, I got permission to record these extensions with an orchestra of top-flight players at a BBC music studio in Maida Vale, just outside London.

Having previously produced an album for RCA London was, I suppose, useful in opening some otherwise sticky doors but looking back, I must acknowledge that Joan’s unflagging support, a decent budget, and Lady Luck were with me all the way. 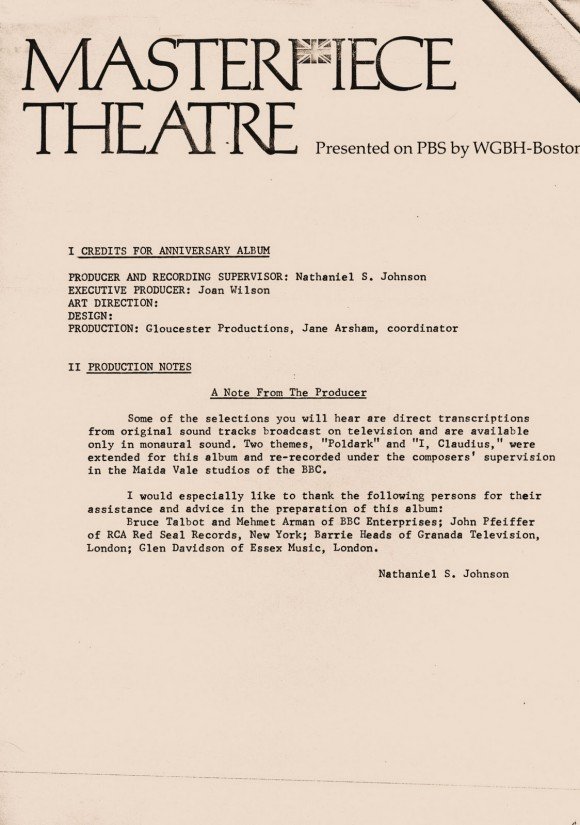 Setting up at Maida Vale on a gray Saturday morning, while waiting for all the musicians to arrive, I was stunned to learn from my studio producer that a musical legend would be joining the band that morning: Alan Civil had been contracted to play French horn. Holy Cow! Alan was Dennis Brain’s successor at the Philharmonia, and had played in the Beatles’ albums “Revolver” and “Sgt. Pepper’s Lonely Hearts Club Band.” Holy Cow! 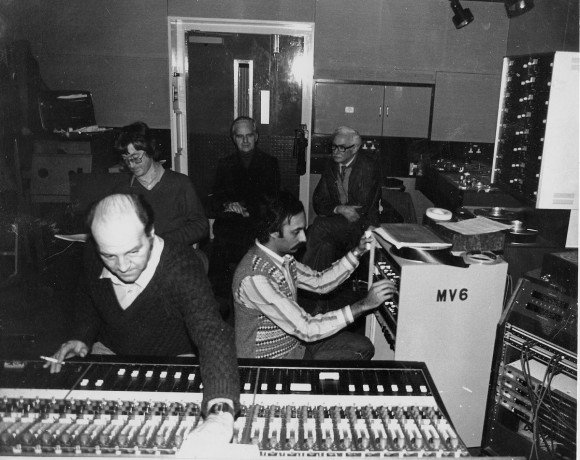 Our band was superb; most everything was completed in just two takes. Some of my fondest memories include meeting and chatting with the composers of “Poldark” and “I, Claudius” and afterwards, enjoying Shepherd’s Pie and a pint for lunch with the crew a local pub following the sessions.

I corresponded with Emrys-Roberts and his wife for years, and was once a guest for dinner in their beautiful home in Sussex. It was a different world, recording in England, and I have often yearned for one more trip, one more tune … just one more take. 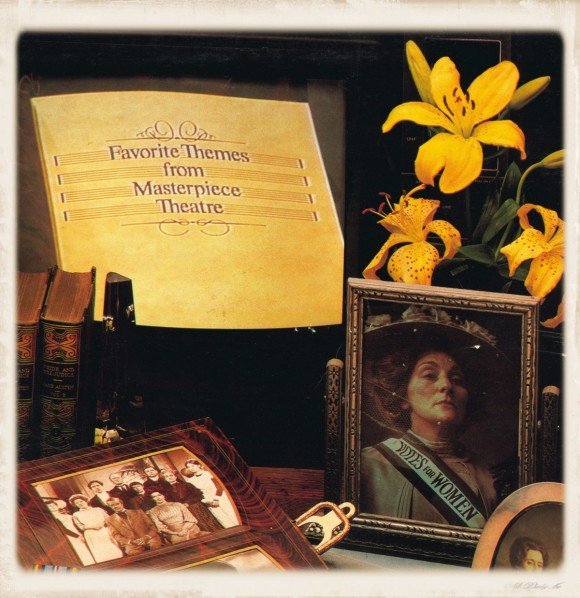