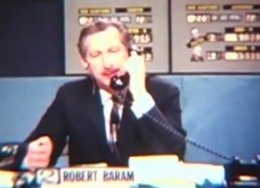 This short film clip was taken during WGBH’s election coverage in November, 1966. Using my trusty Yashica Super 8 camera I shot only about 50 seconds of film, but I slowed it down a bit here. (I would’ve shot more but I had to save film for the Bruins practice the next morning. There were priorities!)

I’m not sure what my role was that night but obviously it wasn’t that crucial since I found time to shoot home movies!

In the clip you may recognize Dave Atwood on camera (and possibly Russ Fortier) as well as Connie White floor directing. Hanging around the AP Teletype machines is Dee Dee Morss (I think). Michael Ambrosino is shown briefly. Bob Baram is host and Louis Lyons interviews the newly elected US Senator from Massachusetts, Edward Brooke, who was the first African-American senator elected by popular vote. A very heady evening.

Although it was a fairly ambitious project, election night was child’s play in comparison to the first Channel 2 Auction just a few months earlier.

My tenure on the production crew at ‘GBH lasted from October 1965 to May of 1967. Bill Cosel was my TV Production Instructor at Northeast Broadcasting School (2nd and 3rd floors above the Hayes-Bickford Restaurant on Boylston St. across from the Pru).

He convinced me to intern at 125 Western Avenue every Wednesday afternoon and evening. I was hired full-time the following spring. The first show I worked on was “Jazz” (directed by Cosel) a live show in Studio A featuring all the great jazz artists who usually were in town to play at Paul’s Mall and the other active jazz clubs. Jackie and Roy were guests on that first show.

Other memorable shows included BSO concerts, Museum Open House, Elliot Norton Reviews, a science show at Harvard with a little-known scientist named Carl Sagan. After that we saw him “billions and billions of times.”

We taped a play in Studio A over several days. It was a Gertrude Stein piece called “Yes is For A Very Young Man” put on by the Theater Company of Boston and featured an unknown by the name of Paul Benedict who later became Mr. Bentley on “The Jeffersons.”

And, of course, the numerous Navy submarine college credit shows. One I worked on quite a bit was “Psychology” with Professor Bernie Harleston. Nice jazz organ theme music.

One VERY memorable day was spent at the home of poet Anne Sexton. We did an all-day shoot from the 1948 Greyhound bus production unit. She was to read several of her poems that we would videotape and produce as filler during breaks in Channel 2’s broadcast schedule.

I was floor manager and all was going smoothly until Ms. Sexton insisted we break for lunch at an Italian restaurant in Hopkinton. After 2 or 3 Martinis, Ms. Sexton agreed to go back to her home in Weston to complete the tapings. It proved to be quite an afternoon. Six months later she won the Pulitzer Prize in poetry and a year or so later, she committed suicide.

Because videotape was so expensive most of these historic events were erased and the tape re-used. Who knew?

And, of course, we all have stories and fond memories of Julia.

Unfortunately, layoffs began in 1967. New Public TV stations were going on the air with all-color cameras and were threatening to dethrone ‘GBH as the main supplier of programming for NET. To pay for the new color equipment, personnel had to be cut. Being one of the last hired, I was on my way out and on to a career in radio in Fitchburg and Central Mass.

I retired to Maine this year after several years working in Access TV in Fitchburg.

Thank you Bill Cosel and WGBH for the experience of a lifetime.