Skip to content
Decades > 1940s
This entry is part 13 of 24 in the series The Fred Barzyk Collection
Reading Time: 7 minutes

You see, I was this kid growing up on the South Side of Milwaukee. The Polish South Side.

It was the 1940s and things were going just great. I mean, we had just won a War.

My Mom and Dad took me to downtown Milwaukee to celebrate. It was either VE or VJ Day.

Anyway, the people were goin’ crazy, dancing, singing, jumpin’ around. One woman kissed me. That was way too much.

Now that the War was over, my Uncle Ed would come home from Germany. My Aunt Frances was going to be so, so happy. 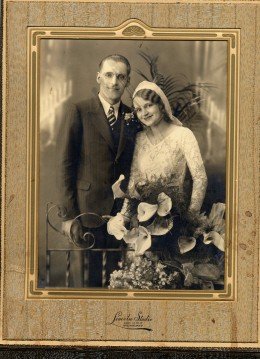 She had this colicky little baby, Edward, and she needed some help. He would cry and cry. You could hear it all over the neighborhood. He was my cousin and I felt sorry for the little kid. For my Aunt, too. 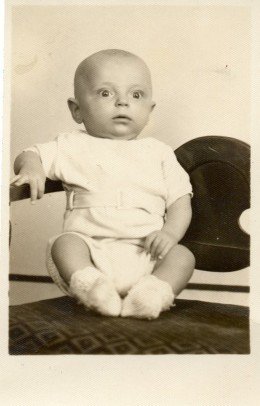 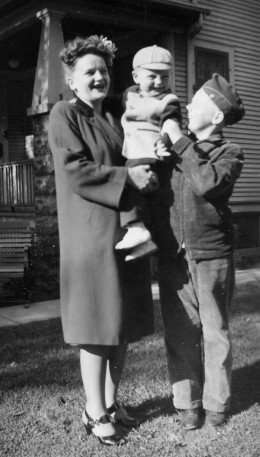 They lived across the street from us. Good old South 7th Street, that was where we lived. We were renters.

On one side of our rented house lived the Getarec’s. Their son, Lawrence, had just formed a Polka band; his friends would come over on weekends to rehearse. They were terrible. Three weeks later, they disbanded. Larry never got to do one of those weddings gigs he wanted to do so badly. Poor Larry.

On the other side of us lived the Nowicki’s. One of their clan was a hunter. Bow and arrow. He and a friend actually took down a 500 lb. Black Bear. They strung it up in their garage. The Milwaukee Journal came and took a picture. He was famous in our neighborhood.

Two young girls lived there, too. Joan and Barbara. 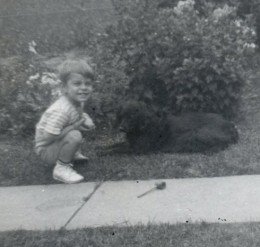 Barbara, lived next door, upstairs.
little kids, we played, making mud pies
under back porches,
digging dirt, all tiny pails and shovels.
Her sister, Joan, older by 4 years, taunted us
“Look! Boyfriend and girlfriend.”
Angrily we denied,
not understanding what it meant anyway,
but knowing nothing good
could come from being
boyfriend
girlfriend. 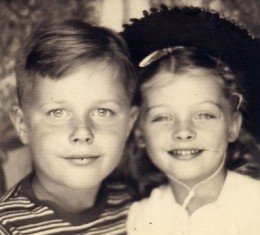 We played movies,
acting out all the parts
in grassy backyards
and concrete alleys
of the Polish South Side.
We had a secret hideout
dark dense bushes
one street over.
Here we could hide.
ours,
no one else allowed.

Then suddenly,
grade school.
She to Catholic, I to Public. 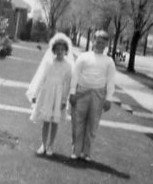 We saw each other
everyday,
but all was changing
We, evolving, living new adventures,
far from secret hideouts,
mud pies under back porches.
Becoming new people,
Wiser, distant.
Why do we have to grow anew?

Left then with only distant memories
Of a little girl who lived next door,
upstairs?

My Mom had this vision for me. She thought it would be wonderful if I could be in show business. 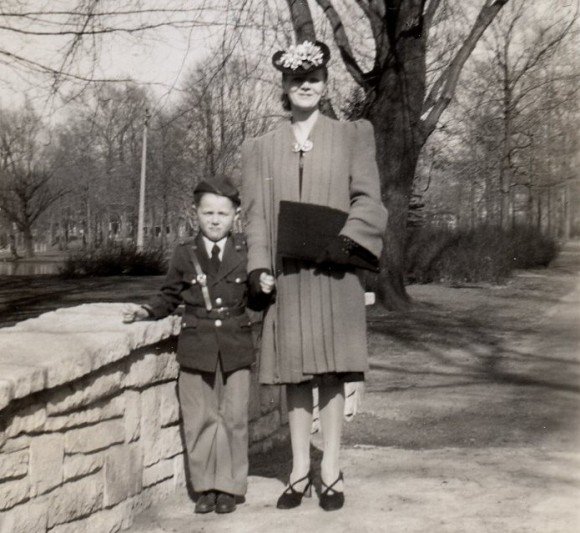 I mean, her very own cousin, Johnny Davis, had a big dance band that played all the big venues in Milwaukee. His band looked something like this.

She was very proud to be his cousin. Johnny’s band had these two young guys, Dennis Morgan and Jack Carson. They went to Hollywood and became movie stars! One of their movies was called “Two Guys from Milwaukee.” Movie critic, Leonard Maltin, gave it 2 and half stars. Not bad.

And my Aunt Frances, well, she was very good friends with a Polish musician from the South Side of Milwaukee. He played piano at all the fancy dinner restaurants in town. His name was Liberace.

My family was just surrounded by all these talented people.

My mother thought, “Why Not Freddy?”

So, when I was seven, she signed me up for dance lessons.

I think she imagined me to be in a show, dressed in costumes, applauded by the masses.

We climbed 101 wooden steps up
Up, to the very tip top
of the 5th Street viaduct,
Mom and I, my tiny tap shoes in hand.

We paid a nickel each and rode the Hinky Dinky,
Milwaukee’s super small streetcar.
Rattling across the South Side,
past smoke stacks,
heady smells from the yeast factory,
we emerged from the rackety ride
and hurried down Wisconsin Avenue
to the School of Dance!

We climbed 31 wooden steps up
Up, to the very tip top
of the old brick building
Mom and I, my tiny tap shoes in hand.

Click, tap. Tap, tap, pat, click
Me, a 7 year old kid,
who bought his clothes in
the Sears husky department

After the fourth tap dance lesson,
riding back on the
Jiggling, clankingly, Hinky Dinky,
it happened.
Breakfast, lunch, snacks
all made a nasty return.
Raining everywhere,
over the hard train seats.

Mom knew the dream was gone.
She put away the tiny tap shoes
way back, in a dark hall closet,
Never to be worn again.
No more click, clack, tap.
Not for those tiny tap shoes.
For that is how dreams die… sometimes.
Without a click or tap,
tap,
tap.

But I didn’t give up on her dream. I announced that I would become a piano player! Only problem was we didn’t have a piano.

I started taking lessons practicing on a piece of fold out cardboard designed to look like piano keys. They knew eventually, I would need a real piano. I don’t think they could afford one, but somehow they managed to buy a small spinet piano. I still have it today.

I really never could play the piano, even after years of lessons. However, it was known in my neighborhood that I had a piano. This fact alone brought me face to face with a dilemma.

I had forgotten about this incident until I started writing this personal history. I learned a lesson that day: Do not judge a book by its cover.

Like a lingering shadow in my memory bank
Hanging there in the void, frozen, pale, fragile —
Almost brushed aside by other fading images
His freckled face —
His sandy hair —
His wet hazel eyes —
His grimy glasses —
So often I ignored him, thinking nothing of him
And now, I can’t even remember his name

It was the end of summer, hot and dry
He came to my porch and knocked on the door
He had never come to my house before
My God, we hardly even talked
But there he stood —
clutching papers,
hoping
How could I have ignored him, thinking nothing of him?
And now, I can’t even remember his name

He heard that I played the piano, that I knew music
He was just a 14 year old Polish kid from the South Side
Not polished or trained in music, awkward and shy
He told me his dream and thrust the papers into my hands
Can you play it?
I wrote it myself.
I can’t play the piano, you know —
Can you play my concerto?
He stood, waiting, hoping
And I can’t even remember his name.

Where did he get the blank music paper?
How did he know about D minor?
Allegro molto?
Andante?
I stared hard at his hand written notes, bewildered —
How could this be?

But there it was
It looked real,
Musically correct
difficult,
way too difficult —
I stuttered, swallowed hard, and admitted my failings
It’s too tough,
I’ve only begun to play the piano
Maybe someone else —
He said nothing, smiled and nodded his head
took his papers back, and left
I watched as he walked away down my street

We saw each other on the playground near St. Helen’s
We played basketball and hung around a little
Summers are like that
He never mentioned our meeting
Neither did I
My piano lessons went on and on
Never mounting to much
I stopped thinking of him
until now.
I wonder if he ever heard his concerto?
I hope so.
So sad that I can’t even remember his name.
Just a lingering shadow in my memory bank

Concrete, stark, a battle field where kids become ensnared in the thoughts of winning and losing, fighting through fears and hoping to win, you know, throwing in the winning basket just before the final bell goes off!  It doesn’t usually work out that way.