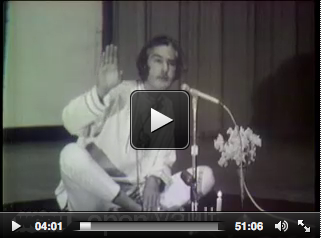 Get ready for a mind-expanding trip with LSD guru Timothy Leary on Open Vault. We’ve just posted LSD: Lettvin vs. Leary, an extraordinary hour-long debate from 1967, shot before a packed house at MIT’s Kresge Auditorium.

The posting comes in connection with an upcoming radio feature story on WGBH 89.7 by local Morning Edition host Bob Seay. It’s about some young researchers at Harvard Medical School who have cracked open the door to the LSD vault, which has pretty much been locked for more than forty years.

We’ll post a link to the radio story when it airs. In the meantime, here’s a brief description of the film:

Leary speaks first. Dressed in Indian-style tunic and trousers, he makes his case mainly in darkness, with psychedelic images flickering on a screen behind him. He describes LSD as a sacrament, a psychedelic technique that enables us to reach a deeper level of thinking and inspiration. “It’s a gamble,” Leary acknowledges:

Lettvin then takes the stage. In his short-sleeved shirt and pocket protector, he seems like a character in a different play. He offers an impassioned critique of Leary’s case, based in part on his experience as a senior psychiatrist in an addict ward. “I look upon you as a fundamentally vicious tool of the devil,” he says to Leary, “and I will explain to you why.”

Lettvin compares the effects of another drug, alcohol, with those of LSD, focusing on what he calls LSD’s “return trips,” the repeated episodes that sometimes follow a single dose of the drug. “You pay for whatever visions you get by this loss in judgment,” he says, “the loss of judgment that stays and stays.”

He sums up his criticism of Leary’s case with one word. “[It’s] not a scientific word, wrote a critic in the Boston Globe, [but] sometimes the right word has to come from the street.”

The film was produced by Austin Hoyt, and shot and edited by Boyd Estus.

Here’s a link to the film: LSD: Lettvin vs. Leary