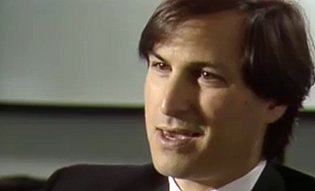 WGBH Open Vault has posted 50 minutes of raw footage from a series called The Machine That Changed The World from 1990.

Thanks to Elizabeth Deane for the tip!

With the loss of Steve Jobs, we have our own remembrance of him, in a superb WGBH interview from 1990. It’s from a series called The Machine That Changed The World. In it, Jobs talks about how that revolutionary device, the Macintosh personal computer, came to be and the particular gifts of the people who made it.

Steve Jobs: “I think the Macintosh was created by a group of people who felt that there wasn’t a strict division between science and art. Or in other words, that mathematics is really a liberal art if you look at it from a slightly different point of view. And why can’t we interject typography into computers. Why can’t we have computers talking to us in English language? And looking back, five years later, this seems like a trivial observation. But at the time it was cataclysmic in its consequences. And the battles that were fought to push this point of view out the door were very large…”

Jobs: “My observation is that the doers are the major thinkers. The people that really create the things that change this industry are both the ‘thinker-doer’ in one person. And if we really go back and we examine, did Leonardo [da Vinci] have a guy off to the side that was thinking five years out in the future what he would paint or the technology he would use to paint it? Of course not. Leonardo was the artist but he also mixed all his own paints. He also was a fairly good chemist. He knew about pigments, knew about human anatomy. And combining all of those skills together, the art and the science, the thinking and the doing, was the exceptional result.”