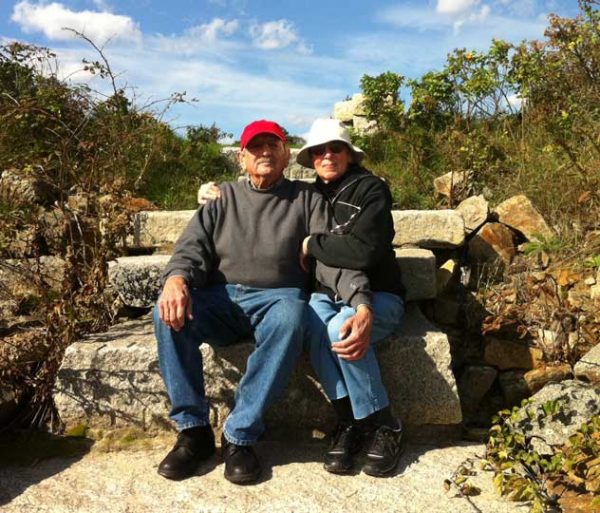 Using grants from the National Endowment for the Arts, The Rockefeller Foundation, and The Massschusetts Council on the Arts, hundreds of artists streamed through the studios of the WGBH New Television Workshop.

Ros and Harris were two of the earliest artists, along with fellow artist Allen Finneran who had banded together into a group called ZONE.

These were exciting moments as we allowed artists to take control of the television equipment and broadcast to an audience who were just beginning to hear the phrase “video art.” Ros Barron worked closely with David Atwood, a very talented producer/director at WGBH, producing some amazing videos.

A new website celebrates the work of these two artists who I met while running the WGBH New Television Workshop. It was a real pleasure working with such talented and serious artists as Ros and Harris.

By John Minkowsky — for the Museum of Fine Arts Boston (excerpts)

Over the past four decades, Ros Barron has created a remarkable body of video works that evolve gracefully around a consistent corpus of themes, images, and personal stylistic motifs. Time, self-deﬁnition, and the nature of consciousness itself — these are among her central concerns. She has often made use of the mannerisms and attributes of surrealism as well as elements of the occult to accomplish these ends.

Among her 18 video works there is a notable quartet in homage to Rene Magritte, some of whose characteristic images and strategies she has embraced and built upon to her own ends. The Artist speaks to the Artist who speaks to Art as it pertains to the Life of the Mind, and the results are an impressive achievement.

The video works she has produced at the New Television Workshop at WGBH, Boston, as a Rockefeller Artist-in-Television, and independently have not been in wide commercial distribution, but instead in visual art contexts: The Museum of Modern Art; Mobius; the Helen Schlien Gallery; and the Institute of Contemporary Art, Boston, as well as in university Visiting Artist Programs … 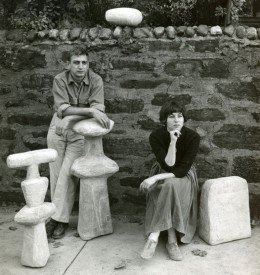 After meeting Harris Barron at the Massachusetts College of Art in 1953, her marriage to him (she was 18; he was 25) was life-changing.

Her painting and Harris’s sculpture, growing larger, more complex and simpler — shown in Boston and New York  galleries, along with his large-scale works commissioned for architecture — preceded the 1968 development of a unique visual theater, ZONE, an intense collaboration with Harris  Marron and Allan Finneran — Harris’s former studio assistant.

After ZONE’s initial and very successful 1968 sold-out performances at Brandeis’ Spingold Theater, WGBH producers offered the three ZONE directors Rockefeller Artists-in-Television grants to work at the station’s studios. Ros’s video focus began there with a major work, Headgame. Barron’s involvement with video process and a developed philosophy has deepened considerably with the 18 video works made over the years since Headgame.

The ZONE group went on to tour 13 New York State SUNY campuses with complex visual theater programs. In  1971 they were commissioned by the Guggenheim Museum to design and realize a major performance work based on  the existing 1909 notes for Kandinsky’s never realized Der  Gelbe Klange [The Yellow Sound] for the museum’s 1972 Kandinsky retrospective.

In 1967, Ros and Harris Barron and Alan Finneran — a former assistant in Harris’ sculpture studio — began talking about widening the sphere of their works to include elements of new technologies, to collaborate on what they saw as integrated “visual theater performance works.” This sample footage of ZONE productions was filmed in 1970.