Erica Wilson, the Julia Child of needlework, who brought the gentle art of crewel — as well as cross-stitch, needlepoint and other traditional embroidery techniques — to an international audience through her books, television shows, correspondence courses, syndicated column and retail shops, died on Tuesday in Manhattan. She was 83…. 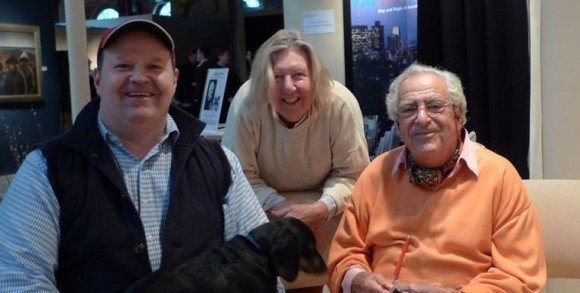 British by birth, Ms. Wilson had lived in New York since arriving in the United States in 1954 for what was supposed to be a yearlong teaching assignment. Since then, without ever really intending to, she built a public career as a teacher of the domestic arts that paralleled Ms. Child’s and in many respects anticipated Martha Stewart’s.

Ms. Wilson, who wrote more than a dozen instructional books, was the host of “Erica,” a public-television program produced by WGBH in Boston in the early 1970s and broadcast nationally….

Trained in London at the Royal School of Needlework, Ms. Wilson arrived in the United States at a propitious moment. American women, flush with postwar prosperity but without careers of their own, had time and disposable income on their hands.

Ms. Wilson put those hands to work. As a result, she was largely responsible for the midcentury American renaissance of hand embroidery, a traditional art that had waned in the 20th century amid the rise of machine sewing.

Under her guidance, women (and some men) learned centuries-old needle arts like cross-stitch, a technique, often seen on American Colonial samplers, in which patterns are formed by arrangements of embroidered X’s; crewel embroidery, in which floral or other motifs are filled in with wool, leaving the background bare; and needlepoint, in which stitches fill the entire canvas, giving the look of tapestry….