In an effort to freshen its image and lift revenue, the Public Broadcasting Service is trying to be more like HBO — without the monthly cable bill….

Emboldened by the success of the British period drama “Downton Abbey,” one of the most critically acclaimed shows on television, PBS now faces the challenge of translating the buzz and enthusiasm for the show into donations to local stations and public financing. A stodgy pledge drive or traditional pleas for contributions would probably fall flat with viewers. So, PBS decided to fit “Downton Abbey,” which begins its second season on Sunday, into a broader effort to spruce up its prime-time lineup. 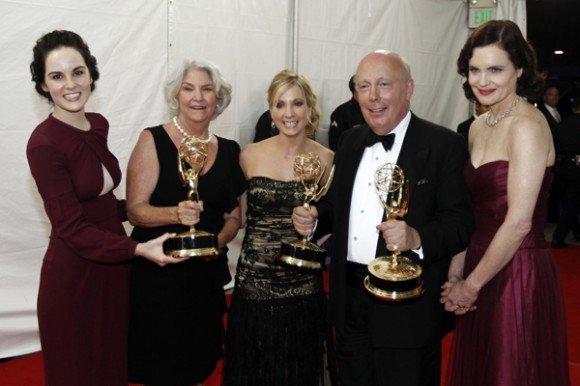 “As you know, HBO has tremendous marketing and advertising muscle behind it,” said executive producer Rebecca Eaton. “When a program like ‘Downton Abbey’ wins, its because it stands on its merits.”

The goal is to attract new viewers to PBS and make audiences think of public television more like the top-tier programming of HBO, Showtime, and other channels they are willing to pay for. “Think of PBS and the local stations as premium television on the honors system,” said John Wilson, senior vice president and chief television programming executive at PBS….

“Downton Abbey,” which follows an aristocratic English family and its nosy staff at a sprawling estate on the cusp of World War I, was first shown on ITV in Britain. It slowly built an audience in the United States after critics called it a “delightful romp.” Viewers who didn’t typically watch PBS tuned in.

“It was the closest thing to water-cooler television as public television gets,” said Rebecca Eaton, executive producer of Masterpiece, produced by WGBH Boston….

Originally envisioned as a mini-series, “Downton Abbey” had such success that the writer, Julian Fellowes, agreed to do additional seasons. The second season begins in 1916 and will run for seven episodes. Its September premiere in Britain averaged more than nine million viewers or roughly a 35 percent share….

PBS doesn’t expect “Downton” to immediately lead to an influx of cash, and still plans to push shows like “Nova” and “Antiques Roadshow” in prime time.