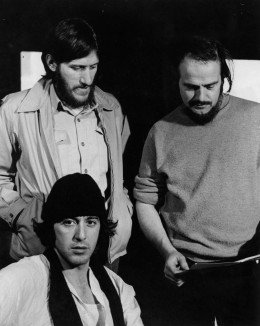 David Wheeler and his company performed many of their stage plays in WGBH studios under the direction of Greg Harney. It was a real collaboration between a theater director and TV director. It was great for both our audience and helped to bring theater goers to Wheeler’s stage plays.

David Wheeler, a towering figure in the history of Boston theater, died yesterday at the age of 86….

As a founder and artistic director of the Theatre Company of Boston from 1963 to 1975, Wheeler brought a spirit of adventure to a then-staid local theater scene. He worked with such young actors as Al Pacino, Dustin Hoffman, Robert De Niro, Stockard Channing, Blythe Danner, Jon Voight, and Robert Duvall early in their careers, before they went on to stardom. “I had five Academy Award winners almost right in a row,’’ he recalled in an interview with the Globe last April.

At Harvard University, Wheeler’s students included Matt Damon, who took his Introduction to Theater Arts class, as well as a directing class.

Al Pacino, one of countless actors whose careers were nurtured by the pioneering Boston theater director David Wheeler, once described him this way to the Globe: “He’s with you like no one I ever worked with – he’s with you in the play; he’s with you in the part. He’s in the struggle with you. He’s always there, through everything….”

“David Wheeler has been one of the lights of my life. He has been there for me throughout and seen me go from a penniless actor who he supported with real generosity, heart and love under his tutelage, inspiration, and guidance. His gift was his ability to move with the actor, to allow the freedom necessary for the actor to express wherever his or her gifts led them. At the same time, he was an advocate for the play and the production. Anyone would tell you his approach was different. He was so individual. His eccentricities, knowledge and intellect are something I will prize forever because they were ego-less. I don’t think I’ve ever met a man or woman more unique. He was who he was and as you go on in life you find people like him are rarities.