It’s the quintessential British period drama series that has captivated and delighted its American cousins. So no one was surprised when Downton Abbey was praised for its Stateside success with a prestigious Golden Globe.

And creator Julian Fellowes beamed with pride as he and his Lord and Lady of the manor as they picked up the gong for Best Mini Series. 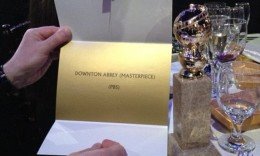 They were joined by executive producers Rebecca Eaton and Gareth Neame and director Brian Percival….

Speaking backstage he said: ‘People tend to love period dramas, but this is one where you don’t know the ending, it’s not like an adaptation of a book.’