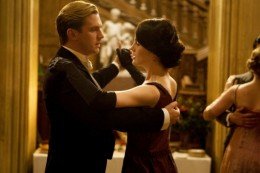 Patton Oswalt obsessively live tweets it from his weekly viewing parties. Katy Perry is using it to distract herself from her marital woes. Roger Ebert has stepped outside the movie realm to praise it in his blog. Saturday Night Livespoofed it. Mob Wives star Big Ang Raiola recited favorite quips for Us Weekly.…

Could all of this fuss really be about a PBS show? Quite right. Masterpiece’s Emmy- and Golden Globe–winning hit, Downton Abbey, created by Julian Fellowes, a TV ratings success and cultural phenomenon, has catapulted the public-television broadcaster with the stodgy reputation to the cool kids’ table….

“There is a Downton-specific phenomenon going on,” said Masterpiece executive producer Rebecca Eaton, who also credited Sherlock with broadening Masterpiece’s audience. “People might have thought maybeMasterpiece was too refined for them, that maybe you had to have a master’s degree to enjoy it. People have come to the understanding that Masterpiece is just very well told stories with high production values and excellent acting, writing, and directing.”