Who knows what evil lurks in the hearts of men? The Shadow knows. 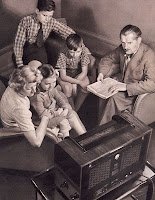 It’s sunset on a Sunday afternoon. I’m eight years old and alone in our darkening living room, listening to a block of creepy radio mysteries crawling out of the Magnavox – Inner Sanctum, The Green Hornet, Lights Out, and the scariest of all, Orson Welles as “The Shadow.”

(Years later, I’d have strange, personal encounters with Welles himself, but that’s another story…)

As a boy, I’d spend hours seated at the console of our Magnavox – a magical machine with a 78 turntable and combo AM/shortwave radio – transfixed by its glowing green dial that drew me into its exotic world: Hong Kong, Paris, London, Tokyo. Strange music and foreign voices, rolling and fading like ocean surf, blending fragments of Morse code or teletype and eerie squeals and squalls, calling to me from somewhere … far out in the ether. This before FM and TV, and the LP, only just beginning to come into our homes.

1964. Fresh out of the army and back home from two years in Japan. I enrolled at the Longy School of Music and Emerson College, and began a part-time job at WBCN, starting on the graveyard shift –Saturdays from 4:00 PM until midnight.

Majoring in organ performance at Longy, I produced my own organ music series at WBCN, “The King of Instruments,” which I later shared with two college stations in Boston – WERS and WBUR. Years later, “The King” also ran briefly on WCRB before ending up at WGBH in 1967. When WGBH abruptly cancelled the show in the 1980’s, it went up on the bird to NPR stations in the Public Radio Cooperative. Long Live the King! 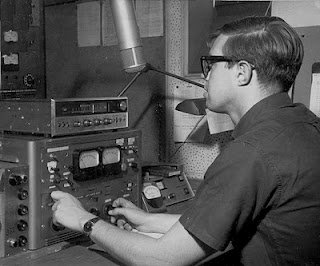 Staffed by true music lovers, a few cranky Bostonians, and super-bright students from Harvard and MIT, there was no better place to work than WBCN, and no finer opportunity to learn the art of music broadcasting. WBCN had an unusually high-quality stereo signal and despite the makeshift apparatus that served as our broadcast console (see photo below), we were blessed with a magnificent Neumann condenser microphone (see photo) that made every announcer sound like a pro!

WBCN was the originator in a string of classical music FM stations on the east coast (the Concert Network) – and we were the Boston Station of the Concert Network. Others stations included WRFK in Virginia, WNCN in New York City, WDAS in Philadelphia, WMTW Mount Washington, New Hampshire, and WHCN in Hartford, Connecticut.

Broadcasts recorded in Boston were “tape-bicycled” to other member stations which worked pretty well, except when the automated Hartford station started playing our Christmas-week programs in July. For economic considerations, WHCN had no “live” announcers. Money was constantly a worry for everyone.

﻿By 1967, WBCN was nearly broke and our blissful existence as devil-may-care broadcast mavericks was coming to an end. WBCN underwent a format switch from classical music to “middle-of-the-road,” so time to move on – to WGBH. Volunteering in the summer of ‘67, I teamed up with Fred Barzyk and Olivia Tappan on their experimental TV series, “What’s Happening, Mr. Silver?”

One night, David Silver, Fred and Olivia visited me at WGBH. They had brought along a brand-new, just-released album by the Beatles: Sgt. Pepper’s Lonely Hearts Club Band. That night, I decided to break with WBCN’s traditionally classical format to air for the first in America, a stereo broadcast of the album. Listeners were astounded – and generally seemed quite captivated.

I aired, for the first time in America, a stereo broadcast of Sgt. Pepper’s Lonely Hearts Club Band. Listeners were astounded – and generally seemed quite captivated.

In December of 1967, with just one-hundred people on staff, I was officially hired at WGBH. My new boss, Bill Busiek, informed me WGBH wanted to continue my organ program and that I could fill in as a part-time announcer, but that I would be paid as an audio engineer – the position for which I was actually hired. Until my move to TV five years later, WGBH Radio seemed the ideal job, although a few quietly questioned whether newcomer Nat Johnson really ought to be wearing so many hats!

Soon after I was hired, ‘GBH-FM built its first “combo” studio whereby on-air-talent could “spin” their own records. I became the first “combo” operator, but that too raised some eyebrows and garnered more grumbles.

The compact-disc era had just begun, so WGBH bought a player. One morning, I aired the first compact-disc ever broadcast on WGBH, but only a few minutes in, it stuck – repeating a passage over and over and over. Fortunately, a listener called in to suggest the problem was probably only dust, or a fingerprint! I took the disc out of the player, apologized to the audience, explained what I was about to do and after cleaning the disc, it played successfully.

For two years, I hosted the weekend edition of Morning Pro Musica, beginning at 7:00 AM, until the indefatigable Robert J. Lurtsema arrived and took over the program in a seven day-a-week marathon. By then, I was happy to rescue my social life on weekends, and be allowed the luxury of sleeping-in on Sunday mornings.

In 1968, a year after I joined, WGBH-FM received grant money from the NEH, the NEA and the Old Dominion Foundation to produce, record, and distribute 13 radios dramas on LP to educational stations around the country. Joan Sullivan and Lyon Todd produced and directed, Bob Carey and Bill Busiek were the principal audio engineers, and I assisted. With my ongoing interest in radio drama, this was the ideal situation to learn, experiment and apprentice. There was nothing like it then, and probably never will be again.

So, in the winter of 1967, I landed at WGBH – and just in the nick of time. WGBH had just been awarded funding for its proposed series of 13 radio dramas, to be distributed in a 13-LP boxed-set to “educational” stations around the country. The radio drama production teams worked in Studio 1 and out of the adjoining FM Sub-Master Control. The rest of us lived in what was called FM Master Control. 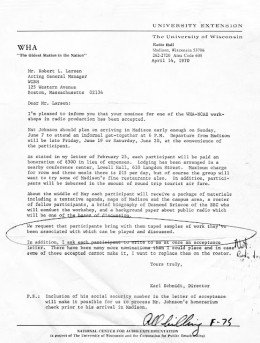 In addition, WGBH produced a heavy schedule of live and taped concerts and lectures from around Boston and Cambridge (including the BSO and Boston Pops), the Gardner Museum and New England Conservatory of Music, Sanders Theater at Harvard, Kresge Auditorium at MIT. We broadcast Ford Hall Forum live from Jordan Hall, plus news, poetry, studio recitals, guest lecturers and recorded programs from the BBC and CBC. WGBH Radio was a wealth of significant cultural activity and a very busy, very happy place to be.

Then, in 1970, shortly after WGBH issued its boxed LP set of radio dramas, another bit of luck: I was chosen to represent WGBH at series of radio drama workshops at the National Center for Audio Experimentation at WHA in Madison, Wisconsin.

These amazing workshops, conducted by Desmond Briscoe of the BBC, were attended by public radio representatives from around the country. 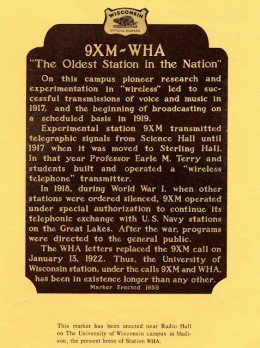 Much of our day was spent in the studio, reading and recording the assigned radio play, creating sound-effects on a table-top Putney Synthesizer, and then the final mix and editing. Oh yes, in those days editing was still on ¼” tape, cut by a razor blade on a splicing block and then glued together with splicing tape. The afternoons were dedicated listening times, during which Desmond Briscoe played us classic BBC radio dramas.

The play for our group was by Tom Stoppard: “The Dissolution of Dominic Boot.” 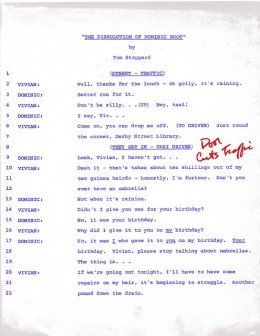 These were heady days and over our horizons, the future looked brilliant indeed.

It was at WGBH I first met Fred Friendly, Edward R. Murrow’s producer at CBS, who spoke to us one memorable afternoon in TV Studio A about the dream about to be birthed for the future of radio and TV. In his talk to us, he called it “the Public Broadcasting Laboratory.”

The last time I saw Fred, many years later, we were both in Grand Central Station and in a hurry to catch trains. I stopped, said hello and reminded him of his visit to WGBH (arranged by GM Hartford Gunn, since departed) and of the dream they had shared with us.

Fred was so pleased, and thanked me for remembering. Yet, I could not help but detect a slight wistfulness to his tone, for I think we both knew that times were changing and that perhaps not every part of the dream was to be realized. I don’t remember exactly what we discussed but at the time, I thought I noted a brief flicker of sadness behind that wide and Friendly smile.

At this post, we are aware that there are hundreds, maybe thousands of ignorant, misguided, misinformed individuals and legislators throughout America who want to defund NPR and PBS, sink them forever, and destroy the legacy of quality broadcasting so many worked so hard for so many years to create.

If nothing else, I hope this little blog [WGBH & Friends] will be useful, and perhaps inspirational, to those read it and might choose to participate in the fray.