For a studio setting for Bucky, someone had arranged for an octagonal truss wall to be shipped to us. This is a Fuller design, much like the children’s toy that has hubs and dowels and can be assembled in a variety of shapes. As we assembled it in the studio, I had to climb up it and was concerned that the frail-looking dowels would not support my weight. However, Fuller’s ingenious design spread out the weight so well that the wall felt solid underneath me. 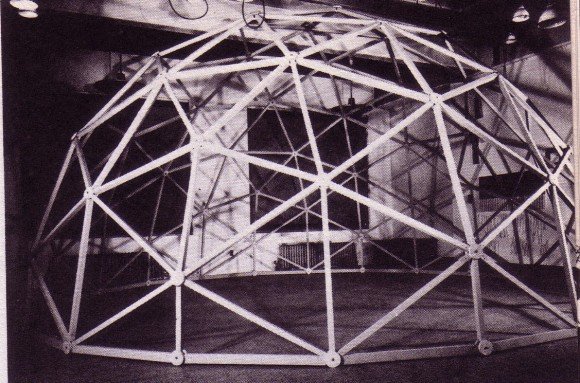 For the Fuller program, the other studio people and myself had to assemble a geodesic dome. It was aluminum struts, color coded, to make it easier to know which end of which strut should be attached to what sort of hub. We were all amazed to find out how easily and fast this structure went up.

I was in my early twenties at the time and did not know very much about Fuller but from the way the executives spoke of him and the way they treated him, it was obvious he had somehow earned their respect I had ben impressed by his wall and his dome and I knew a bit about his Dymaxion (whatever that meant) automobile so I was looking forward to hearing what he had to say.

I was disappointed that, no matter how much attention I tried to give him, I could not understand what he was talking about. His vocabulary was studded with words he had invented in order to talk about new concepts. To follow him, you needed a thorough grounding in the Bucky lexicon.

His work has since become more widely known and appreciated and his interview is certainly worth saving but I wonder how many viewers in 1963 could really have followed his thinking.