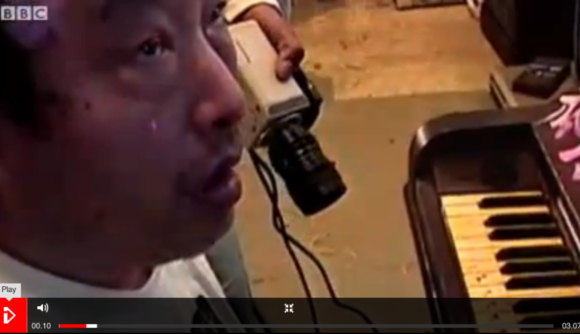 Paik’s work, which has been put on display at the Smithsonian American Art Museum in Washington DC, envisioned a future where the transmission of piles of data could happen instantaneously.

Paik, who died in 2006, was the first artist to experiment with the platform of television, seeing it as an open canvas on which many more artists would one day construct their works.

From the Smithsonian Art Museum:

The artwork and ideas of Nam June Paik were a major influence on late 20th-century art and continue to inspire a new generation of artists.

“Nam June Paik: Global Visionary” offers an unprecedented view into the artist’s creative method by featuring key artworks that convey Paik’s extraordinary accomplishments as a major international artist as well as material drawn from the Nam June Paik Archive, which was acquired by the Smithsonian American Art Museum from the artist’s estate in 2009….

“Nam June Paik: Global Visionary” is on view at the museum’s main building in Washington, D.C., from Dec. 13 through Aug. 11, 2013. John G. Hanhardt, senior curator of film and media arts and the leading expert on Paik and his global influence, organized the exhibition with the assistance of Michael Mansfield, associate curator of film and media arts.