An Appreciation from Rick Hauser and Sally A. Schreiber-Cohn, October 2013

Mary Feldhaus-Weber — she of the soft, light voice, twinkling, teasing eyes and mischievous smile — is no more. She passed away at dusk, as Magic Hour drew to a close, on Sunday, October 6, 2013.

Mary had a distinguished history in theater, film and, most recently, the graphic arts.

Mary hailed from South Dakota. Her dramatic work first was published in Arthur Ballet’s “Playwrights for Tomorrow”. She shared the volume with Megan Terry and Jean-Claude van Italie, forerunners along with her in the avant-garde theatre of 20th-century America. Her play, The Virgin, the Lizard and the Lamb — unlikely, whimsical combination, no? — was a meditative tone-poem about belief and Presence — Incarnation, perhaps, would be a better word. Deborah Jowitt, the noted dance critic for The Village VOICE, danced the part of the Virgin at its New York première.

Watch Mary Feldhaus-Weber’s
I Wish I May I Wish I Might at
WGBH Open Vault.

It was only natural that her works with their inherent movement—coruscating, vaporous conceptions floating about an idiosyncratic center—would find their way to the medium of film. Michael Rice, inspired WGBH Program Manager, shared childhood memories with Mary and it was he who invited her to WGBH, Boston’s vanguard television station, as a Rockefeller Artist-in-Residence. Her assignment was simple — to expose herself to TV, to drink it all in and to create challenging works for the new medium.

That she surely did.

Film was her natural medium — and she loved to experiment. She gravitated to the experimental edge of video/broadcast television. She created, with Rick Hauser, John Morris, gus solomons jr and Peter Downey a two-screen stereo color (new, for the time) dancework for broadcast television called CITY/motion/space/game. Mary took some 16.5 hours of interviews with Gus and crafted his words, taped in numerous sessions throughout the city in drastically varying venues, into a poem that was interspersed with John’s fabulous musical score — itself made of fragments of some 14 hours of sounds from the city — clanging metal of junkyards, traffic sounds, bird song, patterned footsteps on stairs at brutalist Prudential Center and along the damped-down allées of a leafy Boston Garden. 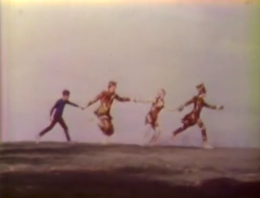 The program received the very first PBS Broadcast Award for Excellence. Team members became the stunned possessors of a little black box sealed in reflective plastic and inhabited by a tiny flashing red light (that eventually dimmed as the battery languished.). Not so, the piece — it still is riveting, insistent, clamorous.

Before C/m/s/g, Mary collaborated with Rick Hauser on Nine Heroes, a lovely documentary piece on remarkable ordinary people who just happened to have risked their lives with no strings attached to save others. It was Mary who said, “Heroism is a brass band.” So Mary and Rick got permission from the Salvation Army to use their recordings for the score for the piece. It received the Gabriel Award and was nominated for a national Emmy.

Mary was inspired. Her other programs were fearless–she chronicled a dying woman’s last months of life in JOAN ROBINSON: One Woman’s Story. The film was harrowing, unrelenting and indescribably touching. For this, she received that year’s highly respected Columbia DuPont Award for Excellence in Broadcast Television.

She was able also to adapt her fairy tales — retellings of the classics, BLUE, RED, GOLD — into lovely filmic tone-poems. She instigated a quirky, two-screen adaptation of the Oedipus myth, ROYAL FLESH — totally improvised, and recorded in over-driven fragmented video as a two-screen TV drama. She did an Annie Oakley biography, too, as part of an ambitious projected series on formidable women.

After Mary’s brain injury from a car accident in late 1979, (the car in which she was riding was struck by a drunk driver), she came to write a chapter in Willard & Spackman’s Occupational Therapy text book. The 10th Edition has Mary’s painting on the cover (publication February, 2003). The most recent Update is in the 11th Edition (published March 1, 2008). Her chapter is called “Excerpts from the Book of Sorrows, Book of Dreams,” in which she describes her process of living with brain injury.

Since there were no at-home services for people in her situation in the year after her injury, the head of Occupational Therapy at Boston University, Anna Dean Scott, volunteered to help. She also guided her OT students to visit Mary and take dictation, since at the time, Mary couldn’t write. The early part of Mary’s chapter is from this time. As a result of this ground-breaking work of OT for the brain-injured, the field moved forward. Mary’s chapter includes color plates of her powerful paintings, which she created to help her make sense of what happened to her.

We bear her homage.