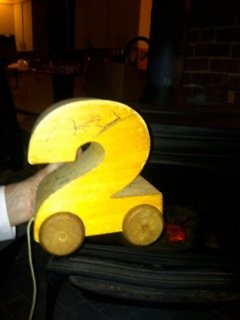 While back in Massachusetts visiting family, I spotted a surviving “2-Toy” at a friend’s house.

In the days when car salesman Ernie Boch used to pop out of a trunk and urge car shoppers to “c’mon down!” on commercial TV, who can forget the hyperbolic copy we wrote offering the 2-Toy as a perk to donors.

Following the days when Julia Child urged viewers to “send stamps, send coins” to keep Channel 2 going and when WGBH President David Ives sang for contributions on-air and rode a circus elephant while promising that he’d “do anything to raise money for Channel 2,” we successfully added Channel Two Umbrellas, tote bags, and on-air pledging to our efforts to successfully raise the money we required.

Ready for something new, along came the 2-Toy. “Yes, folks,” we wrote, “here it is — the long-awaited CHANNEL 2-TOY!” “Carved from a solid block of obeche wood, the Channel 2-Toy will show our appreciation for your generous support of our children’s programs…” We promised viewers that the thing had “sturdy wooden wheels,” “a pull rope,” “stood a proud six-and-one-half inches tall,” and had a “smooth, hand-rubbed finish.” What adoring parent, we thought, wouldn’t want one of these for their children to remind them of the educational value of WGBH’s programs.

Designed by the talented, Yale-educated Chris Pullman and egged on by the indefatigable Sylvia Davis, Pullman had us slowly drag a 2-TOY smeared with dog food through a miniature model train village set up on a table in Studio A. As it inched along, my Golden Retriever “Barnaby” lay on the tabletop and watched from beyond tiny rooftops as The Toy progressed “through town,” his brown eyes glued to the determined digit. My off-camera role was to keep Barnaby from jumping off the table between takes, and to slowly pull the toy along by its string.

The 2-Toy’s thematic parent was a ten-foot-high, plywood “2-MOBILE” bolted to an old Volkswagen chassis. The 2-Mobile ran fitfully, was unstable in the slightest cross-wind, and was a challenge to drive, but we did so anyway, and with great enthusiasm. The idea was to drive it through suburban communities “from the Cape to Route 128 and back to our studios by August 31st” while a large, lighted in-studio map charted progress during “the countdown to the end of our fiscal year.” In each community, volunteers organized grip-and-grin photos with local poohbahs while supporters of our children’s programs lined up, we hoped, with contributions envelopes while remote crews taped the fun. While all this was going on, we offered 2-Toys on-air.

I can’t remember how many of the wooden wonders we actually sold, nor do I recall whether the 2-Mobile actually arrived back at the studios stuffed with contributions. But it did make for some excitement and notice. One sunny afternoon, for example, we drove it nonstop through the guard gate at Hanscom Air Base, where we were supposed to have advance permission to enter. Cameraman Boyd Estus, splayed out on the roof of a chase vehicle, recorded the surprised look on the guard’s face. We thought he’d perhaps salute as we teetered through. But instead, he looked alarmed and grabbed for his phone. By the time we stopped the thing, two military police vehicles pulled up and demanded to see our permit. Today, we’d be taken to the brig.

My friends proudly keep their 2-Toy on the floor near ready for visiting grandchildren. Decorated with crayon marks, the appraisers on ANTIQUES ROADSHOW would surely find its value “inestimable.” It was, after all, yet another fun way to encourage viewer’s support, it became part of WGBH’s energetic, entrepreneurial history, it helped to distinguish us from the riff-raff, and it kept us all laughing.

David Atwood, too, still has one. It’s standing a proud six-and-one half inches tall above the desk in his home office.