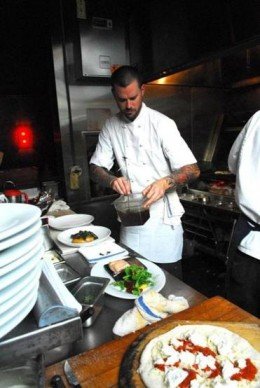 “Victory Garden’s edibleFEAST,” a PBS television series debuting locally March 29, aims to be the best of the old and new.

The 13 episodes are a combination of vintage clips from the long-running “The Victory Garden” and new video from Edible Feast, a member of Edible Communities Inc., publishers of “Edible” magazines. The new segments feature Daniel Klein, who introduces viewers to sustainable food practices; the chef also stars in an online weekly documentary called The Perennial Plate, which won a 2013 James Beard award.

The original “Victory Garden,” created by WGBH, aired from 1975 to 2009. The new iteration will feature Klein on the road, from New York to Oregon, harvesting sea urchin or growing shiitake mushrooms. Classic video clips will feature Roger Swain in the garden, advising on planting leeks, differentiating varieties of cherry tomatoes, and more, with Marian Morash in the kitchen preparing vegetable dishes such as rhubarb crisp and Chinese cabbage salad.

“Our hope is to offer existing fans a new take on the series and introduce the next generation of viewers to a more contemporary version of one of television’s most iconic franchises,” says WGBH executive producer Laurie Donnelly.