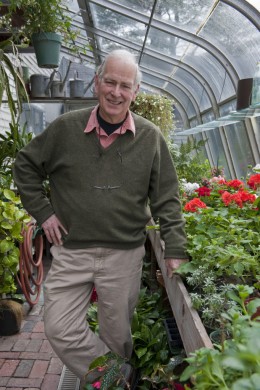 The National Academy of Television Arts & Sciences (NATAS) announced that Russ Morash, the producer and director of the historic, “The French Chef,” with Julia Child and the creator of “This Old House” and many other iconic public television programs will be honored at the 41st Annual Daytime Creative Arts Emmy® Awards with the prestigious Lifetime Achievement Award.

“Fifty-four years of combined programming, 13 Emmy® Awards, and one groundbreaking career later, the father of how-to TV most emphatically deserves a lifetime achievement award,” said Malachy Wienges, Chairman, NATAS. “I am thrilled that Russ has been chosen as this year’s Lifetime Achievement honoree,” said David Michaels, Senior Executive Producer of the Daytime Emmy® Awards. “This is part of our conscious effort to acknowledge the career contribution of those people who work in the Creative Arts. We couldn’t be happier for him and we’re very excited to be presenting this honor at the Daytime Creative Arts Emmy® Award gala surrounded by all his peers!

“When I first moved from New Zealand to the US almost 30 years ago, the Daytime TV shows that caught my attention were created by Russ Morash,” said Brent Stanton, Executive Director, Daytime Emmy® Awards. “His innovation of using specialists in the role of hosts on such shows as “This Old House,” “The Victory Garden” and “The New Yankee Workshop” helped to pave the way for the proliferation of the Lifestyle genres on television and the internet.”

“As a brilliant creator/producer/director, Russ Morash used his personal passion and love for well prepared food, gardening, home improvement/repair and woodworking to develop a whole new genre of television programs,” said Norm Abram, Master Carpenter, This Old House and Host, The New Yankee Workshop. “Russ always wanted to learn more himself, but more importantly he wanted to share knowledge with others. The experts and craftsmen he featured on the shows he created did just 2 that. Generations have been and will continue learning “how to” thanks to Russ who started it all over 50 years ago with Julia Child.”

Russ Morash was fresh out of college when he entered the young world of television in 1957. At the time, his employer, Boston’s WGBH, had been on the air for only two years. He immediately put the theater training he’d received at Boston University to work mounting productions and dealing with talent. He knew talent when he saw it, and when he began working with a “strange woman with this strange accent” named, Julia Child, “The French Chef” — and “how-to television” — were born. Over time, Russ’s personal enthusiasms — cooking, gardening, home repair, woodworking — would become, through his choice of talent, tone, and content, America’s first foray into “reality television.”

In 1975, he dragged two huge studio cameras outside to record the first episode of “Crockett’s Victory Garden” in raised beds set up in the station’s parking lot. Three years later, he convinced his bosses to buy a dilapidated Victorian home so that he could document its rehabilitation under the hammer of Norm Abram and the showmanship of Bob Vila. “This Old House” has been running for 35 years and counting!

Part of Russ’s “mad genius,” according to his Emmy® Award-winning cameraman Dick Holden, was to free the TV-making process from as many technical encumbrances as possible, pushing portable cameras and wireless microphones into new areas. “For electronic field camera use, everything we were used to seeing before changed with those shows,” says Holden, “and most of what we see today began then.”

His remarkable success continued with the launch of “The New Yankee Workshop” in 1989 and “Ask This Old House” in 2002. All of Russ’s programs are all based on a simple and revolutionary idea: authentic information, presently clearly by experts themselves. Often, through sheer force of will, he brought these programs into being. He taught and inspired a generation of TV producers who follow in his footsteps. Ultimately, his legacy is generations of TV viewers who value the expertise, work ethic, and skill of craftsmen and women and who know the true value of a job well done.