Excerpts from the Miami Herald 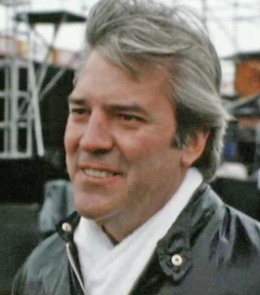 Before Kiss, no rock group had ever put quite as much emphasis on the outrageous while onstage.

It was up to Kenneth Anderson to make those wild antics happen.

Anderson, who died of cancer at 75 on Dec. 15 at his Hallandale Beach home, was vice president of production at Aucoin Management in New York and helped design Kiss’ stage productions from 1976 to 1982.

This was the era when the hard rock foursome’s theatrical shows were evolving at a crazy, scary pace. A fire-breathing bassist. A levitating drum set. Flashing lightning bolts. Confetti rockets.

“Don’t try to describe a Kiss concert if you’ve never seen it,” South Florida troubadour Jimmy Buffett once quipped in his 1978 tune, Mañana. He was clearly referencing Anderson’s stage designs. These came from ideas that were coming fast and furious from band leaders Gene Simmons and Paul Stanley…

“Ken Anderson was dedicated to our cause and his skill was in evidence to anyone who saw our stages during those years,” Simmons and Stanley posted on the Kiss website.

Anderson was born in Melrose, MA. One of his first gigs was as a lighting director at Boston’s WGBH for its signature series, The French Chef starring Julia Child. He met Bill Aucoin there, Kiss’ former manager who helped catapult the band after its formation in 1972. Anderson also worked on Sesame Street, its spin-off, The Electric Company, and stage production work with Jesus Christ Superstar and Oh, Calcutta!