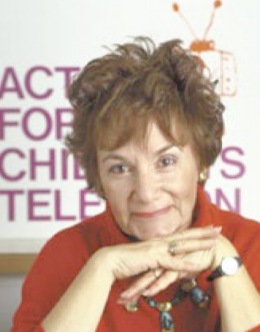 Boston public media leader WGBH will remember and celebrate the late children’s television advocate Peggy Charren Friday, March 6, starting at 11am. The gathering will be held in WGBH’s Fraser Performance Studio, entrance to which is via One Guest Street in Boston’s Brighton neighborhood.

WGBH President and CEO Jon Abbott will welcome Peggy’s friends and fans and invite participants to share a “Peggy story,” an observation, or other offering—or to sit in silent contemplation. Light refreshments will follow. (If you’re unable to join us and would like to send thoughts to be shared on your behalf, please see contact information below.)

Peggy died January 22, 2015 at the age of 86. Small in stature but in nothing else, she took on the giants of the commercial TV industry in the 1970s as the head of Action for Children’s Television (ACT), bringing about substantive programming and legislative changes that bettered the lives of millions. She was recognized with Emmy and Peabody Awards and with our country’s highest civilian honor, the Presidential Medal of Freedom.

WGBH’s relationship with Peggy began when she advised us on productions from Degrassi Junior High to Zoom, helping us create better educational children’s programming. She was an ardent and effective champion of WGBH and public media in Washington, DC. Over time, she moved into a different role, as a WGBH Overseer and then Trustee.

WGBH is honored to have been named a recipient of memorial contributions in Peggy’s name. Kindly direct gifts in her memory to WGBH, One Guest Street, Boston, MA 02135 or contribute online at http://www.wgbh.org/peggy.

Personal messages remembering Peggy may be sent to her elder daughter Debbie Charren (155 South Street, Northampton, MA 01060), who will attend the WGBH gathering along with other family members.