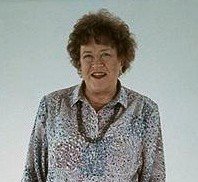 In 1966, the people who produce the Emmy awards decided it was time to recognize Educational TV, as it was then called.  They created a couple of award categories for ETV, and nominated several people.  The only winner was Julia Child, who had risen to national prominence by then.

Several of us from WGBH were at the award dinner at the Americana Hotel in New York.  The host of the Emmy broadcast that year was to be Bill Cosby, but he didn’t make his entrance until they went on the air.  In the meantime, before the broadcast, a number of the lesser awards were given out, including Julia’s.

Julia collected her Emmy and returned to the table.  Then someone came over and asked her to come along to the next room for a publicity photo.  Julia walked in, and there was Cosby.  The plan was to take a picture of Cosby handing the Emmy to Julia.  So Julia walked up to Cosby and said in her breezy way, “Well, I’m Julia Child, and who are you?”

At that moment they took the picture, and the quizzical look on Cosby’s face was priceless.  The photo was posted on the wall in the lobby of the building on Western Avenue, and it was still hanging there when I left the following year.  I looked for it at the reunion, and was terribly sorry to see it had gone.

When the broadcast began, Cosby was introduced with a big flourish.  Julia, now back at her table, looked very puzzled.  “I don’t understand,” she said.  “They’re calling him Cosby, but he distinctly told me that his name was Poitier!”

We soon enough figured out what had happened, and explained to Julia that Cosby must have been kidding.  “Oh, but I have to apologize to him,” she said.  “I just have to explain that I don’t watch his kind of television!”

We assured Julia that the explanation was unnecessary.