Paul Binder is the founder of the Big Apple Circus and author of Never Quote the Weather to a Sea Lion. Read his profile, with videos, here at WGBH Alumni. 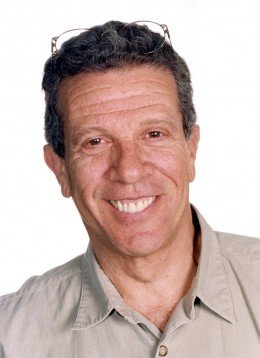 I graduated Dartmouth and landed in Boston to work on my Masters in Theater Directing at Boston University’s School of Applied Arts.

Within two weeks, I realized that the one place I didn’t want to be was studying for my Masters in Theater Directing at Boston University’s School of Applied Arts.

On the same day I quit school, I went over to WGBH for an unannounced visit to see George Tuttle, who had been a teacher of mine at Dartmouth, and who was now a producer/director in what they called, in those days, “Educational Television.”

His secretary came out to tell me that George wasn’t in, but that if a Paul Binder ever came by when he wasn’t there, to tell him that he was expecting a visit sometime, and that he had a job for me.

Well, with my Ivy League Bachelors Degree in History in hand, I was quickly hired at WGBH Television as Vice President of National Programming. At least that what I planned to tell my parents.

In reality, I was hired as an entry level Production Assistant at $55 dollars a week … plus overtime.

Far and away my best early assignment was to be Floor Manager on a new program being produced for the network. When I heard about the show, it was obvious, at least to me, that the show would never last. But, for $55 dollars a week plus overtime, I was publicly enthusiastic about its chances.

The show I was so sure wouldn’t last, and why I never did have a career in a network’s programming department, was called “The French Chef” — and it was hosted by a remarkable woman named Julia Child.

At six feet two inches, she was taller than I, but it was her passion that wowed me. She loved the food she discovered while living in Paris, and wanted everyone to share in those culinary delights. Her passion was teaching and eating, and over the years, in half-hour segments, Julia Child changed the cooking and eating habits of America. Her home kitchen, designed by her husband Paul in 1961 and subsequently used in three television series, is now on display at the Smithsonian.

I was barely 21 years old on my very first day as floor manager for The French Chef. I could see that this was a labor of love for Julia. We would record two shows a day – a main course and a dessert course. Julia not only did all the cooking for the shows but, unlike the pampered present day stars on the Food Network, she did all the prep work for each course as well – her only assistance coming from our producer Ruth Lockwood. 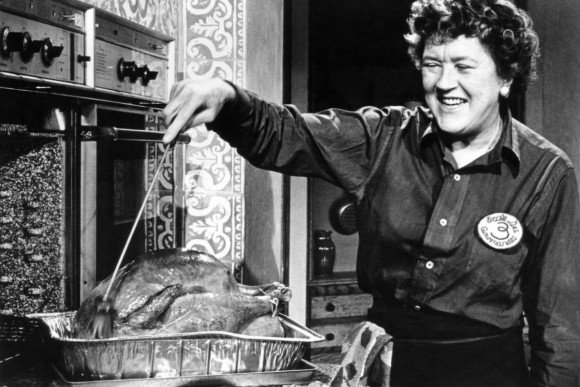 With the production crew in mind, Julia would always prepare the main course for the morning taping, so we could all count on a delicious lunch. The dessert show she saved for the afternoon’s taping, and by end of each shooting day, she would give me a shopping bag full of food to take home.

On that first day I was naturally nervous, but resolved not to let her see it. No easy task, as I would be positioned twelve feet directly in front of her. During that first taping I heard the voice of our director, Russ Morash, loudly in my headset, “Tell her she’s sweating, Paul.“

I (Gulp!) quickly considered all the possible ways of communicating to her this tricky, personal, and potentially embarrassing situation. Then, I wrote one word on my large paper pad and held it up for her to see: PERS-PIR-A-TION. A moment later she casually mopped her brow with a dishcloth, and I proudly thought to myself: whew, I got that one right!

As the show ended, I counted her down with my fingers: 5… 4… 3… 2… out. She was laughing and happy. The show had worked, the food looked great. She walked up to me, engulfed me in that large frame with a hug, and said with a laugh in her high, diphthong-laden voice: “Paul, where I come from, they call it SWEAT!!”

Where I come from, they call it that, too.

Julia was endlessly curious. She took a sincere interest in every crew member. She cared about our individual lives and interests, our favorite shows, our families. The works!

And, she had an insatiable curiosity about the business of television. When she asked to be taught the use of “those huge cameras,” we trained her as well as we could. She enjoyed it so much she starred in a birthday celebration for the station that we taped, doing a parody of herself. I can still hear that bold, bemused, delighted voice: “And this slimy stuff is called one- inch videotape. You just take a cleaver and Whack! It’s edited!”

Inspirational? Yes. And, I think Julia was a great leader. I sure learned the power of leadership from her. To be leaders, we need to take a sincere interest in everyone on our teams. She sure did. Show them we are committed to their success, and that we are there to support them. Most importantly, to treat everyone as individuals, by celebrating their individuality.