From Eleanor vs JFK: The Back Story. From WGBH.

It was made possible because Mrs. Roosevelt’s longtime friend Henry Morgenthau III was able to secure funding from the Ford Foundation for a monthly seminar to be conducted by Mrs. Roosevelt at Brandeis University in Waltham. The monthly programs were produced on Sunday afternoons at Slosberg Music Center on the Brandeis campus (with occasional forays to New York, Washington, London and Paris).

During the first year, the programs were directed by David M. Davis. They were executive produced by Henry Morgenthau, and the two co-producers were Paul Noble and Diana Tead Michaelis. Virginia Kassel and Beatrice Braude rounded out the production team. In the second year, Paul Noble was the director; in the third year, the director was Gene S. Nichols.

The programs were recorded and distributed on videotape. 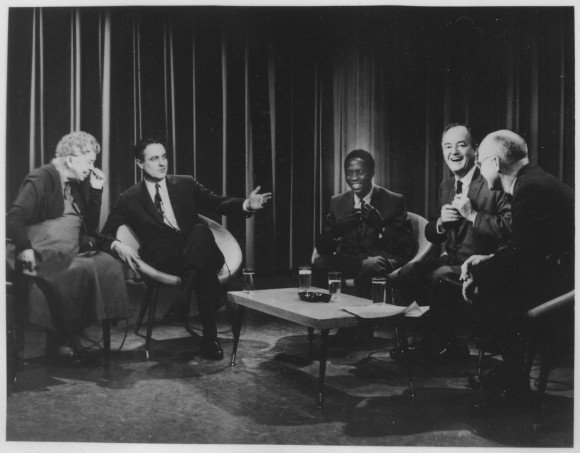 Mrs. Roosevelt always was partnered with a journalist or specialist on each program, such as Erwin Canham or Saville Davis of the Christian Science Monitor, Dr. Henry Kissinger from Harvard University, Dr. Jerome Weisner from MIT, and others.

Untold stories about the series:

In her later years, Mrs. Roosevelt suffered from a loss of hearing. She also tired easily under the hot lights. To remedy that, our engineering department fitted her with an earpiece giving her program audio. If she seemed to be losing attention, we boosted the sound going into the headset.

One day in Manhattan, while crossing the street, she stepped between two parked cars on Eighth Street in Greenwich Village, and a car backed into her, knocking her down. She said to the stunned driver “I’m fine! Just keep going!” “After all,” she said, “I was the one at fault and I didn’t want to get him into trouble.” She limped to her destination, gave her scheduled speech, then went home (to the house she shared with her doctor and his wife), and was then taken for X-rays. She suffered a sprain, but it meant we had to move the following Sunday’s show to WNEW-TV in New York.

The only time I ever had a fight with a Nobel Prize winner was with Dr. Ralph Bunche, then Under Secretary-General of the United Nations. He refused to wear a “TV Blue” shirt, which I offered him. “I am not a clown!” he shouted.

When Mrs. Roosevelt decided to take a fall holiday in the Dolomites in Europe in September 1960, this interfered with her scheduled tapings in Boston. Henry reached out to his old friend Leonard Miall in London, then Head of Talks at the BBC. Within a few days, arrangements were made to tape two shows in London, which would not only be part of “Prospects of Mankind” but which would air on the BBC. We headed to London on August 8 to prepare for the early September tapings. We were assigned a director for the programs who later became one of the longest-lasting BBC directors, a Welshman named Huw Weldon, whose program “Monitor” was a precursor or model for America’s “60 Minutes.”

One of the key guests was the 88-year-old Lord Bertrand Russell, socialist, atheist, mathematician, and philosopher. I introduced him to Mrs. R. “Madam, I admire your energy!” he said. “What about you, sir?” she responded.After a lunch with a great deal of wit and teasing remarks, Lord Russell asked me if his parent had to sign the standard release form where it said “parent’s signature.” I said, “Yes, where does your parent live?” He responded “That is a question that can only be answered by theologians.”

In 1939, a young reporter for the Boston Globe attended an “off-the-record” press briefing in a Boston hotel with the then-Ambassador to the Court of St. James, the Honorable Joseph P. Kennedy. The Ambassador said that under no circumstances should the U. S. get involved in the war against the Nazis, a war which was then imminent and threatening to Great Britain as well as the rest of the continent.Louis Lyons ignored the “off-the-record” request, printed the story, and it made headlines nationwide. The next morning, Mrs. Eleanor Roosevelt [she told me this story herself] read the paper, stormed into Franklin’s bedroom and said “Franklin, fire that man!”Twenty-one years later, Sunday, January 3, 1960, Senator John F. Kennedy was one of Mrs. Roosevelt’s guests on the campus of Brandeis University for her monthly “Prospects of Mankind” program. It was the day JFK announced his decision to run for President. Henry Morgenthau persuaded his friend “Jack” to appear on the show. After the taping, there was an impromptu press conference for JFK on the set. Who asked the first question? You guessed it, Louis Lyons!Did JFK know that Louis had done his father in? We’ll never know.And how did JFK later convince Mrs. Roosevelt to support his candidacy? Was it because she traded that support for his agreement to start the Peace Corps [which was announced on Mrs. Roosevelt’s program the following February]? Historians will have to answer that question.

When Senator Kennedy arrived at Slosberg Music Center to record Mrs. Roosevelt’s program, he was wearing a J. Press shirt, initialed JFK.  I asked him if he wouldn’t mind exchanging it temporarily for a TV Blue shirt.  He agreed, and I gave him one from our supply, size 16 1/2 neck, 35 sleeve.Later that week, I had his shirt laundered, and I returned it to him at the Senate Office Building.  He kept the WGBH shirt.Years later, I still regret not keeping his shirt as a memento or to wear on special occasions.